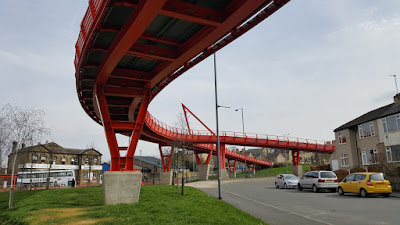 This is the last bridge in my current series of bridges in Yorkshire. This one is not in Leeds, where most were, but in nearby Bradford.

I wrote about this design in September 2010, before it was built:


To me, the whole effort is uninspired and unattractive, a step backwards visually, and certainly a lost opportunity to exploit the opportunities of structural engineering.

The bridge was designed in sympathy with the Manchester Road bus shelters project, with the same vocabulary of slightly disjointed bright red structural steel. The bridge takes pedestrians and cyclists over the busy main road, connecting to a wider network of pathways.

The bridge was designed by Bradford Council's in-house engineering team, and built by Eric Wright Group. I don't know who the steelwork subcontractor was, and I'm not aware of an architect. It won a Certificate of Excellence from the ICE in 2013.

Visiting the bridge "in-the-flesh", I certainly had to revise my original opinion. Whatever was I thinking?

The Big Red Bridge (as it is apparently known), is big, and red, and more than a little absurd. Obviously, the colour makes it stand out from its surroundings, but I like how it signposts itself so well. You want to go there, from here? The path is obvious.

Like the bus shelters, it is something of a jumble. The bridge supports come in at least three different flavours, but everything is related. I like the way the steel H-sections in the supports are connected together with stiffened intersections.

The central tower, which seemed to be nothing but an impertinent appurtenance, makes sense as an extension of its support, and as a waymarker that anchors the whole assembly visually.

Even the corrugated iron parapet infills lose something of their inherent naffness when painted red and united with the rest of the bridge.

I think it's a very interesting and surprisingly visually attractive bridge, with a bold and very self-consistent sensibility, that fits well into its site. 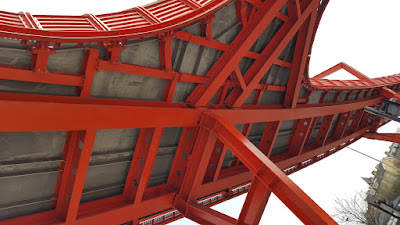 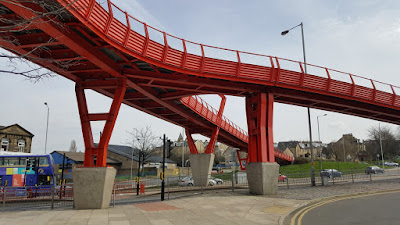 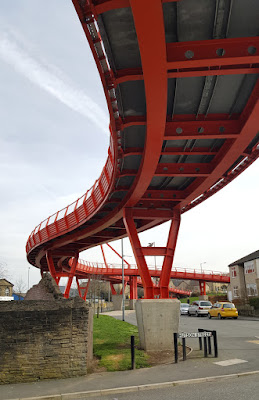 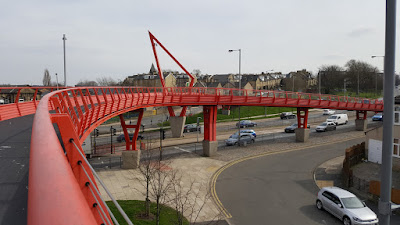 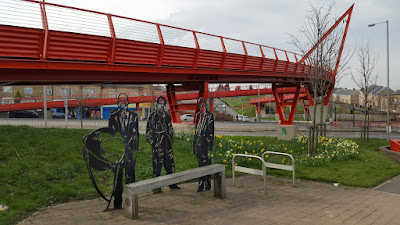 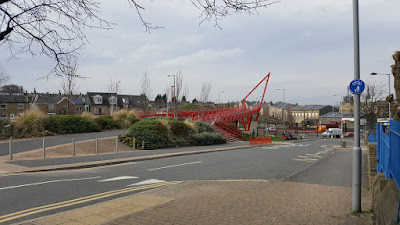