In August 2017, I posted the 17-strong shortlist for a bridge design competition in Budapest, Hungary. The contest was seeking a design for a major new road bridge over the River Danube, to provide a long-planned transport connection on the south side of the city. 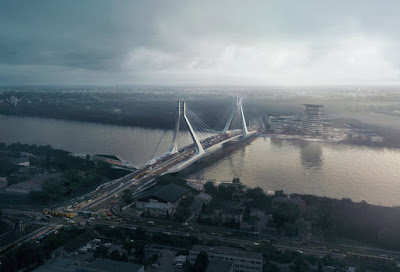 The competition winner was announced yesterday, and is a twin-mast cable-stayed bridge designed by UN Studio and Buro Happold. So far, I've not found much detail on the internet (and it's all in Hungarian), but I guess the span is around 250-300m. 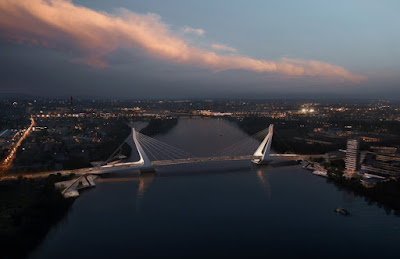 The most obvious thing about the bridge (remarked on in several of the Hungarian news features), is its striking resemblance to the Erasmus Bridge in Rotterdam, also designed by UN Studio (but with different engineers). I guess if plagiarism is the highest form of flattery, plagiarising your own ideas shows who you respect the most. 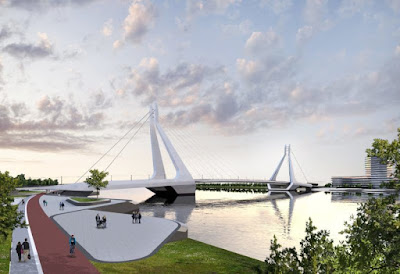 It's basically two Erasmus bridges joined together, and has a figurative resemblance to two people kneeling down facing each other. The cranked tower legs are connected to massive edge girders in the back-spans. 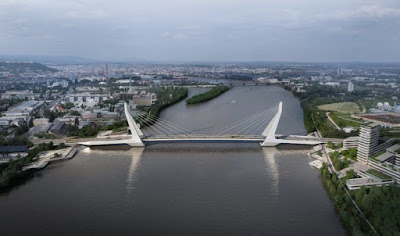 Other than the doubling up, the other obvious difference to the Erasmus Bridge is that the towers are significantly chunkier in Budapest, which I guess is a consequence of carrying a heavier carriageway (the Danube Bridge contest specified four highway and two tramway lanes). 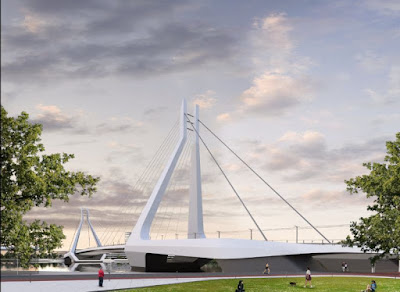 The Erasmus Bridge design was problematic - expensive to build; and the two edge girders were to a great extent over-sized fascias, sized for visual rather than structural effect. It was also greatly complicated by the details required to transfer axial loads between the main-span and back-span girders, as these are offset from one another. From what can be seen in these images, the same problem exists in the Budapest design. 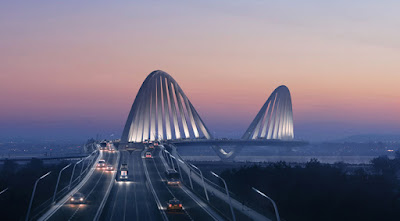 This twin-arch design has the kind of gargantuan disregard for context that you would expect from ZHA. I'm struggling to understand why the judges would so highly praise a concept which puts a support pedestal slap-bang in the middle of the river, when this is so easily avoidable. The "hangers" connecting the arch to the deck are also so large that they give the impression they are holding up the arch, rather than suspending the deck.

Three of the entrants were were selected for runners-up prizes:

I'm hoping that more of the entries will be made public, as it will be interesting to put the winners in context, and understand what made them the stand-out choices.
Posted by The Happy Pontist at 10:07 PM

i am unsure how the winner, or either of the two second place schemes, fulfill 3.2.7.3 of the brief!...
3.2.7.3 Structural Efficiency
The EC will appraise positively:
Structural slenderness and the efficient pairing of the materials used and static conditions

Well, we haven't seen the other entries yet, so we can't know whether they were any better ...