When it was first announced back in August 2016, I labelled Suffolk County Council's Upper Orwell Crossing project "one of the worst bridge design competitions to be organised in the UK for quite some time".

Working with RIBA's competitions office, SCC had set up a contest to select an architectural partner for their previously-appointed consulting engineer, WSP.

The prequalification conditions were set in such a way as to prevent smaller practices from entering (although this was later changed, after complaints), and engineers, however creative, were excluded, unless they were also registered as an architect. The contest was in essence a beauty parade to set up an arranged marriage between the winner and WSP, but was formatted as a design contest, with each competitor preparing designs to be judged, but not necessarily selected for further development.

Probably the contest's worst feature was that the evaluation was to be made on a quality/price split, with 60% of marks for quality of the design, and 40% on the basis of a lump sum fee quotation. This gave SCC some assurance that they would not be screwed in post-contest negotiations over the architect's fee, but it set up the possibility that a poor designer could be selected on the basis of being cheaper than better contestants, or that a good designer could lose out due to a slightly higher fee.

It was far from clear what SCC were really seeking, but the whole competition seemed to fly in the face of best practice.

My comments were echoed by others, with several criticisms reported in the Architects' Journal the following month. Much of the criticism focused on the arranged marriage element, which is not the way most successful collaborative teams normally come together.

The competition organisers selected five competitors in October 2016: Foster + Partners, WilkinsonEyre, Knight Architects, Marc Mimram, and a team of Adamson Associates / Ney and Partners / William Matthews Associates (WMA). The observant reader will note that three of the five (Foster, Mimram and Ney) have substantial engineering expertise of their own. At this time I commented: "The financial element will work against certain entrants, I think, as my experience is that architects' fee levels can vary significantly." 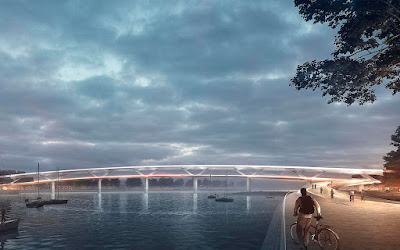 In March 2017, the winner was announced as Foster + Partners, which was interesting as they were one of the competitors I would have expected to have been disadvantaged by the price element of the evaluation. I doubt that many clients select Foster because they are cheaper than the alternatives.

I expressed the feeling that perhaps Suffolk were being over-ambitious, and I also noted the way that what had supposedly been a contest to choose a design partner had subtly slipped into being a contest to identify the best design.

And that was that, until the Architects' Journal returned to the fray a couple of days ago with an exhaustive investigation of the Upper Orwell Crossing procurement process.

Now, I must say I don't really trust the AJ on bridge procurement. They have played a key role in exposing the shambles of London's ill-fated Garden Bridge, but they have also manufactured some completely nonsensical controversy with regard to the Canary Wharf to Rotherhithe crossing.

Nonetheless, their take on the Upper Orwell Crossings does not make for happy reading. I'll pick out only a couple of the key points.

First, the AJ draws attention to the scoring of submissions by the judges, and they include an image of the scoring sheets in their article. What jumps out here is that judges Michael Hopkins and Patty Hopkins each scored the Foster + Partners submission 10/10 not only on every criterion, but for all three of the bridge spans presented (there were three spans required, A, B and C). For those who don't follow architecture closely, Michael and Patty are husband and wife. Michael Hopkins was, of course, also one of Foster's close early associates, both having worked together on the Willis Building in Ipswich, Suffolk.

Here are the evaluation criteria set out in the original invitation to tender document (which is helpfully archived online): 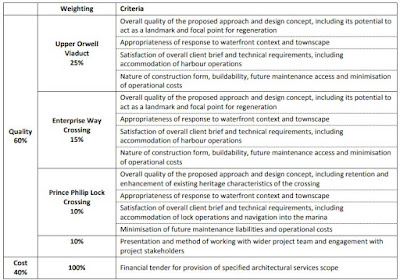 What is notable here, in the quality marking, is that 50/60 of the marks are for the quality of the designs submitted, and only 10/60 for "method of working", despite this supposedly being a contest to select a design partner, not a design.

As did all the contestants, Foster + Partners submitted two designs for each of the two main spans. Looking at the score sheets provided by the AJ in their article, Michael Hopkins did not even bother to mark the second design (it appears that all the other judges did). Patty Hopkins did mark it slightly lower than the first design.

Some of  the other judges appeared more critical. In comparison to the two Hopkins judges, Kevin Drain, the lead WSP engineer responsible for the project and who is presumably now working with the architect to take the project forward, awarded Foster's designs 102 out of the maximum possible 120 marks. Jonathan McDowell, the member of the jury with perhaps the greatest experience as a bridge architect, gave only 79 out of 120.

Here is the jury panel as originally announced in the tender invitation:

The AJ remarks on the notable absence of Patty Hopkins from that list. 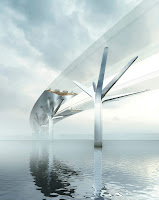 The designs of the other competitors have not been made public, so it's impossible to comment on their relative quality. I note that the Foster design for the main highway bridge (all the images used in this post) shares some distinctive design elements with their Chateau Margaux Winery, tree-like supports designed for a small building roof and here adapted for a much heavier highway bridge. It will be interesting to see whether the competition-phase design is taken forward.

Second, this extract from the timeline put together by the AJ makes interesting reading:

The original plan was for a winner to be announced in December 2016. By the time of shortlisting, the timetable had slipped, and the announcement was then scheduled for January 2017. The timeline shows that instead, Suffolk sought "financial clarifications" from bidders, delaying the announcement until March.

The AJ reports that the amendments to tender prices may not in fact have been legally appropriate: the "restricted procedure" (shortlisting followed by tender submission) under EU law does not normally permit post-tender negotiations. It is intended to be used by clients where their requirements are clear, such that bidders can price the scope of work fairly.

The AJ has uncovered the range of prices submitted, with the lowest being £537,202, and the next lowest £1.1m. The highest was around £2.63m. This seems an extraordinary range of prices (even in light of the range of bidders involved), and suggests that the scope for the architectural services was not clear at all.

The winning competitor, Foster, is reported to have submitted a price around £1.4m. According to the AJ, the scoring system used to compare prices was that the lowest bidder received 100 points for price; with others receiving 100 minus one point for each percentage point by which their price exceeded the cheapest. Under this system, unless prices are close, most bidders (including Foster) would have received negative scores for the price component of their bid.

However, in February 2017, Foster wrote to Suffolk proposing a reduced fee of £845,000. The following month, they were declared the winner. 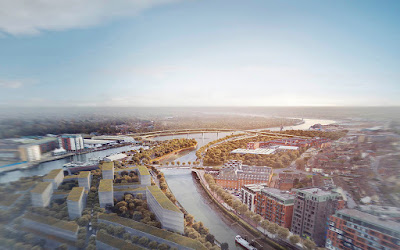 The overall impression created is clearly not good. No doubt the process has been entirely above board. The same, of course, was claimed in the Garden Bridge's notoriously skewed procurement which appointed Heatherwick Studio instead of seemingly better-qualified competitors. On that occasion, the winning designer's fee was more than three times as high as either of the other bidders, yet they alone were given the opportunity to reduce their price and ended up being awarded the job. It's hard not to see the distinct similarity in the Upper Orwell Crossing procurement.

I don't have any reason to think that the judging was unfair: the two Hopkins partners were perfectly entitled to show enthusiasm for whatever they thought was best. They were not the entire judging panel.

However, the root of the mess clearly lies in the way the original tender evaluation scoring was set up, which would be shame had it not been utterly predictable. Set up to give the impression that price was secondary to quality, the scoring regime instead made certain that price was all, and eliminated the possibility of making a sensible judgement primarily on quality.

As always, the project will be one to watch as it moves forward. I very much doubt that the designs shown at competition stage will be what is built, and in the absence of any meaningful cost or buildability evaluation, it's entirely possible they are beyond what Suffolk County Council can actually afford.
Posted by The Happy Pontist at 8:09 PM

Thanks for the writeup! What's wrong with 60/40% split for evaluating design and cost? I thought this was typical for competitions and tenders.

It's reasonably normal for tenders. For competitions, which are normally intended to procure either the best design or the best designer, it can grossly distort the overall scoring so that good design is no longer valued. That's especially the case where the price scoring system is so exaggerated as here (i.e. the scoring *range* for price is much higher than the scoring *range* for quality). In this instance, it's not really 40% at all, price is made to grossly outweigh quality.