I can only scratch the surface of this exceptionally complex and sorry saga. Long-time readers may recall that I wrote about the Johnson Street Bridge project in Victoria, Canada, back in October and November 2009. I haven't really followed it in any detail since then, but I've been missing out on a fascinating story.

Back in 2009, the controversy was over Victoria's decision to replace a highly historic Strauss heel trunnion bascule bridge, a rare and complex structure (pictured, courtesy Cacophony via Wikipedia). In April 2009, the city had identified that the bridge was in poor condition and vulnerable to potential collapse in a seismic event. They commissioned engineers MMM and architect Wilkinson Eyre to develop options for a replacement span. An unusual and very interesting design was selected, a $63m rolling bascule bridge with a ring girder which rotates about its centre point (visualisation from WEA shown below).

Controversy centred on whether the new bridge was actually necessary, or whether the historic structure could have been refurbished rather than lost. There was plenty of discussion, and the debate was well publicised and well informed.

Things have moved on considerably. The span replacement project has continued, with PCL appointed as contractor and Hardesty and Hanover added to the design team. The structure is currently on site, due for completion in March. The budget for the project is now reported to be $105m.

Before you read any further, you may wish to find a comfortable chair, and pour a very large glass of whisky. Or two.

The people at johnsonstreetbridge.org were key in opposing the original intention for a bridge replacement, and have since kept a close eye on the project. They have links to a whole series of key documents which describe the scheme's often shambolic progress, which taken together make for very painful reading. 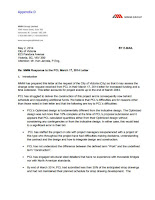 A particular classic is MMM's letter to the City of Victoria in May 2014. MMM were (and still are) appointed as Victoria's bridge design consultant; this is not a design-and-build project. PCL had a peculiar contract which covers construction but which obliges them to propose value engineering ideas with a view to reducing the cost of the project (clearly, this strategy has been a big fat failure!) Despite this glorious aspiration, PCL had written to Victoria in March 2014 requesting both an extension of time and an increase in their payment for the works. They argued that it was impossible to stay within their original price, and that they were entitled to more.

MMM's letter advised Victoria on whether to accept PCL's claim. It cannot be considered in any respect objective, as MMM were also defending themselves against a series of faults alleged by PCL. Read all 30 pages of it with a very large pinch of salt. However, it's a frankly terrifying read: an appalling saga of poor performance, buck-passing, and what must be one of the worst procurement arrangements I've ever seen.

I can't bear to give even the edited highlights of it here: go and read it (only if you really did pour that big glass of whisky) to see how this project was spiralling rapidly downhill. The real root of the problems is never mentioned, however, which is the absurdity of the procurement arrangement.

MMM had prepared a reference design for the City, although this was only quite preliminary in scope at the time when PCL were appointed (on what was supposedly a lump-sum contract). PCL were obliged to develop a value-engineered design as part of their bid, and appointed Hardesty and Hanover to assist with this. This was also not undertaken to any great level of detail. Despite this, PCL were obliged to stick to their agreed lump-sum, while Victoria and MMM retained full responsibility for the detailed design.

Yes, read that again, and weep if you wish. PCL could not properly control the design (and hence the extent of their construction work), yet were held to a fixed price. Indeed, PCL's designers, Hardesty and Hanover, were then novated across to join MMM's team in developing the detailed design. I don't think I've ever heard of such an arrangement before - the more obvious setup would have been to novate MMM to PCL so that the contractor could control the design-and-build process as an integrated exercise in order to mitigate their risks. This would at least have given Victoria complete clarity as to where any further problems lay. The whole arrangement is utterly bizarre.

Beginning to recognise that the project was in serious difficulty, Victoria appointed independent consultant Jonathan Huggett to report on what was going wrong, and recommend how it should be put right. His report was issued in July 2014, and sidesteps the obviously flawed contractual arrangements but highlights a complete lack of project leadership, the complete lack of collaborative behaviours, failure to properly identify and address key risks, and lack of independent dispute resolution, amongst other problems.

Huggett's report was clearly taken quickly to heart by the City of Victoria - even before he had finished writing it, he had already been appointed to take charge of the project going forward.

Somewhere in all this, it's worth noting that Wilkinson Eyre's original design has been substantially watered down in the ongoing effort to contain the ever-escalating costs. We can only guess how much higher the project budget would now be if the original design was still being built!

There are a few more reports worth reading if you poured a second glass of whisky, not just one.

Online news site Focus on Victoria has been a dogged pursuer of the project's difficulties. An article earlier this year on issues with the bridge's fendering design is a splendid example of how easily the project seems to have blundered into difficulty.

The latest reports from Focus cover issues with the bridge's steel fabrication. They highlight the discovery of a problem with the steelwork, which appears to have been covered over with a truly awful looking bolted plate, a real bodge if ever you see one (photos are from Focus, with permission). The steel ring girders had to be cut open for repair work, although the reason has not been made public in any detail. The contractor's QA firm reportedly found a "design flaw" while steel was under fabrication in China. 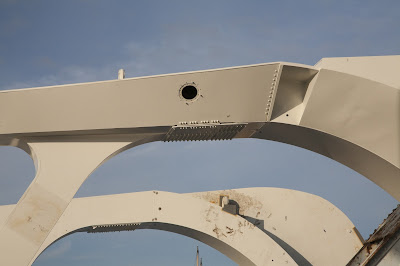 This doesn't really make sense: QA firms are not there to validate design, they are there to ensure compliance with the design during construction. Indeed, Focus's lengthy article may well be making a mountain out of a molehill, suggesting a cover-up and conspiracy to the extent of malfeasance. It's difficult to judge the seriousness of the issue without further information being made available. However, Focus is quite write to criticise the detail. It's clear from the photographs that nothing this awful should be considered acceptable as part of the finished structure. 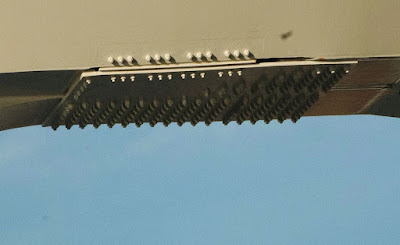 Like a dog with a bone, Focus won't let this one go, returning with a second article wondering quite why the (presumably exasperated) City Council won't make public all the details. What have they got to hide? Perhaps on a project so bedevilled with disaster they simply lack the energy for further exposure. Who could blame them? On the other hand, Victoria has been exhaustively open about what else it releases, down even to copies of supplier invoices.

This is a complex and innovative bridge, and it's hard not to think that further problems will occur before the project will be complete. Some of that is inevitable with such a bespoke, pioneering design. I certainly wouldn't bet against mechanical problems during the commissioning stage. Teething problems are, however, normal, and I hope that any further press coverage is balanced rather than sensational.

If all goes well, in a few months time we can look forward to seeing the completed bridge, and comparing it against the original vision. Hopefully it will be something that everyone involved can be proud of. However, the tale of woe that has bedevilled the project from the outset will continue to offer many lessons to be learned for others involved in bridge procurement, long after the dust eventually settles.
Posted by The Happy Pontist at 11:25 PM