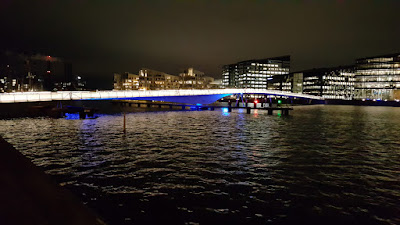 The previous four bridges in this series of posts have all been moveable bridges, and Bryggebroen ("Quay Bridge") doesn't break that trend.

Built in 2006, it connects two quaysides across the Copenhagen inner harbour, hence the imaginative name. The east side is mostly a residential area, with the Gemini Residence, apartments built around former grain silos, dominating the area immediately adjacent to the bridge. The west bank features offices, residences, and a large shopping mall.

The bridge was designed by Dissing + Weitling with Carl Bro as engineer. The contractor's engineer for the D&B phase was COWI. The 190m long bridge is a steel spine-beam structure, with the spine box dividing cycle and foot traffic. The structural form was a consequence both of the traffic segregation and the desire for a low construction depth from floor to soffit.

The opening element is an asymmetric swing span (44m navigation span and 23m back span). Deep boxes sag below the walkway floor to provide sufficient strength and stiffness, and the pivot is tucked away between two sides of the box. As with the similar arrangement on the Inderhavnbroen, it is visually massive, and out-of-keeping with the rest of the bridge.

The designers acknowledge that this was never meant to be an "iconic" structure, but given its prominent position, I think too little effort was made to render it visually attractive. The piers are thin tubular trestle legs, which feel awkward next to the width and scale of the bridge deck.

The spine beam, particularly seen up close, is lengthy and somewhat morose. I'm puzzled as to why nothing was done to prevent people walking, skating or riding along its top: perhaps these things simply don't happen in sober Copenhagen. 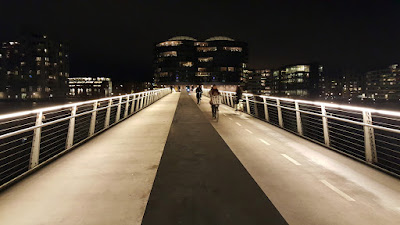