I was in Copenhagen recently, and got a chance to wander past a few of the city's more interesting bridges. I'm going to post here about six of them. 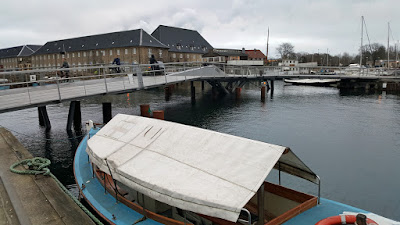 The first is the "butterfly bridge", designed by Dietmar Feichtinger Architectes with WTM Engineers. The bridge is the result of a 2009 design competition, and was completed in 2015. It is reported to have cost €4.7m, which feels like a lot for such a small structure.

The bridge is sited at a "T-junction" in the canals near Copenhagen's inner harbour. It forms a key pedestrian and cycle connection, especially improving links northwards to the city's new opera house. The chosen design is a three-way bridge, connecting three quaysides together.

Two of the bridge's three spans are opening bascules, allowing cyclists and pedestrians low-level connections across the structure while also allowing watercraft unrestricted access to the canal basins, which are heavily used to dock small boats.

The two opening spans are 23m long steel spine beam structures, with a 4m cycleway to one side of the trapezoidal box girder spine, and a 3m footway to the other. The box girder varies in depth from 0.5m to a maximum of 1.7m, with much of the depth concealed below deck. The deepest section of the beam is directly above a pair of hydraulic cylinders, which open the deck. There is no counterweight system: the deck is small and light enough that it's not required.

The tripartite configuration of the bridge appears awkward in some ways. You don't need three spans to allow passage in all directions across a T-junction, you only need two, so the plan arrangement of the bridge has a slightly forced air.

One result of this is a very constrained platform area in the middle, a triangular tabletop which seems too tight for the cycle paths, and which inevitably increases conflict between cycle and pedestrian movements. If there had been only two spans, it would have been possible to create more space to manoeuvre at the ends.

I'm also puzzled by the decision to use a box girder with a flat, rather than steepled top. It seems purpose designed to encourage people to ride up onto it, which won't be safe for others around them. Perhaps the sensible Danes never do such things.

Perhaps the Danes also admire the greyness and furrow-browed restraint embodied in the design. Other than the butterfly-wing motif (which is displayed only for a tiny fraction of the time), this is really quite a boring bridge. For me, it completely lacks charm, and more importantly any sense of fun. This is a shame for a structure which by its nature ought to be more demonstrative.

Perhaps it's a good thing that infrastructure should be modest and expressionless, but I think this bridge is a missed opportunity, an opening bridge which closes down rather than opens up space. It feels "tight", constrained, unnecessarily spartan.

Posted by The Happy Pontist at 7:58 PM

I think your analysis is very accurate, I had a bike accident on that bridge a few weeks ago and it was mainly due to constraint middle area that makes passages complicated and dangerous. Also, hard to detect which way to go and do it without being hit by another bike. Especially, on busy summer days in CPH.