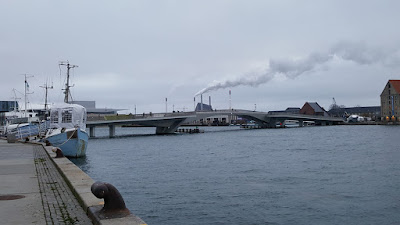 All the bridges I visited in Copenhagen either span the city's inner harbour, or run close by it. The third in this set, the Inderhavnsbroen, is named simply for what it is: the Inner Harbour Bridge. It's the most recent bridge to span these waters, completed in August 2016.

The bridge was designed by COWI and Studio Bednarski, adopting a rare bridge typology and making it even more unique. It carries pedestrians and cyclists across the waterway, and is a double leaf retractable bridge. Structurae only lists seven retractable bridges worldwide, and I think only 4 of those are still in use, although that's certainly an incomplete list.

The Inderhavnsbroen is distinctive in a number of ways. The general arrangement is unusual, with two approaches each arranged in a tuning-fork layout, allowing the retractable decks to slide back and forth between the prongs of the fork. Plan curvature adds significant complexity, with the bridge overall adopting a gentle S-shaped curve.

The bridge had a troubled gestation. This is an understatement, to say the least! The contractor Pihl and Søn was appointed in 2011, with a price reported to be significantly below that of other bidders. As the project progressed, problems were reported with the steelwork not meeting requirements, and later with cracks and other defects in the concrete supports. Errors were reported in design drawings showing supports 0.6m higher than they should have done.

In August 2013, Pihl and Søn collapsed. I believe all the bridge steelwork already fabricated was scrapped, and during the wait for a new firm to be appointed, storm flooding damaged electric motors which had already been installed. Independent engineers were brought in to review the works, reporting inadequate reinforcement in some supports. The new contractor appointed in 2014, Valmont SM, had to undertake extensive remedial works to parts of the structure already completed. 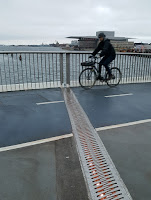 Progress improved, but new problems were still encountered. The wire rope system which pulls the bridge open and closed was found to be faulty. Close to completion of the construction, it was found that the two arms of the bridge did not meet properly in the middle, with locking bolts misaligned. This was attributed to twisting under differential temperature effects, caused by temperature variations across the width of the bridge deck, not allowed for in design standards.

By the time the bridge was complete, it was claimed to have taken twice as long as planned, and cost 50% more than the original budget. The design team went on record to criticise their own client, the City of Copenhagen, who have also gone on record criticising the design engineer. For the most part, the design team's complaints related to the client's procurement and project management process, which led to a number of "unauthorised" or bodged changes to the original design.

Problems during design and construction are often forgotten and forgiven once a bridge is complete. Unfortunately, the Inderhavnsbroen has experienced considerable public criticism even once in service - more on that in a moment.

It's worth commenting on the way in which the bridge was funded, along with three smaller structures including the nearby Butterfly Bridge. It was not funded by the City of Copenhagen, but by the A.P. Møller Foundation, to the tune (in the end) of 241 million Danish Krone (about £29m, or €32m). These are not in my view excessive sums when compared to other expensive and complex spans such as the millennium bridges in Gateshead or London. However, I do wonder whether the lure of private money can subvert normal sound governance, public accountability, and good decision-making. Would the municipality have approached the project differently if it had been entirely their own money?

The basic concept for the bridge has a lot of merit. The arrangement chosen allows pedestrians to get much closer to "the action" when the bridge opens than is often the case with opening bridge. Bascule spans rise up to block the river from view. Swing bridges leave waiting users stranded. The Inderhavnenbroen concept uses the side spans as balconies so that those waiting can have a closer encounter both with the movement of the main span and with any ships that pass through.

The arrangement has some unfortunate visual side effects, however. Moving bridges often suffer from a loss of visual continuity associated with unavoidable breaks in the structure. Here, however, the offset from the side spans to the main spans creates a significant disjuncture in both form and scale, which I felt was quite jarring from many viewing positions.

This is then accentuated further by the design of the moving spans. The side spans are all girders below deck, while the moving spans have massive edge girders which not only sag below deck at the point of support, like the wings of a robotic manta ray, but also rise up above floor level at the same point. This leads to a very distinctive change in level of the edge of the deck at the position where the opening and fixed spans meet, and it has also introduced a complex twist into the opening span balustrades.

Generally, the moving spans seem far too deep to me, giving them a feel of heaviness rather than the lightness that a moveable bridge normally embodies. The design of the edge girders also determines too many other elements of the design. They are angled outwards, leading to some mildly gruesome complications along the join-line between moving and fixed spans: the bridge balustrades are forced to be tilted outwards on the fixed spans, as are gates which prevent access to the main spans when the bridge opens. However, the balustrades on the moving spans are vertical at this point, tilting inwards above the support girders, and then becoming vertical again at midspan. It's all extremely awkward.

The rising barrier gates reportedly became a problem late in the bridge's development, with short segments of triangular barrier added next to them as an afterthought.

The whole area of the ends of the moving deck is troublesome. A median barrier is used to separate pedestrian and cyclists, although they have no barrier on the rest of the main span. Cyclists are obliged to negotiate rapid chicanes to pass from the internal to the external spans, and this has been the source of much criticism, expressed most pitilessly in an article for ArchDaily, and physically embodied by the addition of red and white striped warning stickers on various parts of the bridge.

The bridge appears quite steep, and the chicanes are clearly too tight to negotiate on a bicycle without slowing down. A series of rubber skid-marks attests to the inevitable outcome: cyclists struggling to brake and avoid headfirst impact into the glazed balustrades which form the ends of the moveable span.

The slope of the deck was probably unavoidable given navigational requirements and the general topography of the harbour area. However, the dead-end facing oncoming cyclists was eminently avoidable: the chicanes could have been made less tight, and the ends of the deck angled so that errant cyclists are at least spared head-on impact.

It's hard not to wonder whether the twin-girder solution is also partly to blame. A spine-beam deck would have kept cyclists and pedestrians separated throughout, avoiding the risk of impacting the end of the median barrier. It may also have allowed the visual depth of the opening span to be better integrated with the side spans.

The separation of cyclists and pedestrians also generates a great deal of dead space on the bridge. The balcony on the pedestrian side of the bridge may get some use, but matching balconies on the cyclist side presumably see very little use most of the time: I certainly didn't want to risk crossing the cycle path to get to it.

Perhaps it's not the done thing in Copenhagen, which is criss-crossed with cycleways, but adopting a shared-space approach would have had the advantage of both slowing down cyclists tremendously as well as giving all bridge users better access to all parts of the bridge. With the current arrangement, pedestrians are essentially barred from the north half of the structure.

On the positive side, the bridge clearly fills an important gap in the city's connectivity; I visited both at night and in daytime, and it was always well used. It also escapes the greyness which is characteristic of too much Scandinavian infrastructure, even though only a little. The blue and yellow glazed panels contrast well with the rest of the bridge, and are a nice touch. One panel is currently cracked, but I don't know whether a cycling accident or vandalism is to blame.

The choice of design was ambitious from the outset. The numerous problems encountered during design development and construction are to some extent the result of misfortune and mismanagement. However, some are inherent in the design concept, and others are the sort of thing which is inevitable with any highly complex, pioneering structure, especially where bespoke mechanical engineering is involved. That's an inevitable consequence of a challenging, uncompromising design.

I was very glad to visit the Inderhavnsbroen. It's a very interesting structure, and everyone involved no doubt feels a great sense of accomplishment for its (eventual) completion. It will be interesting to see whether the Copenhagen municipality can find ways to address the design flaws other than simply sticking on red-and-white warning markers. I would hope that there are more creative solutions better in keeping with the rest of the design intent. 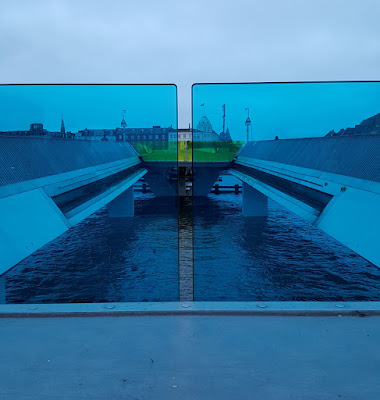 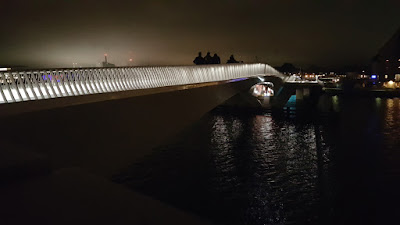 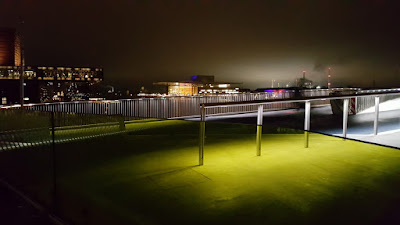 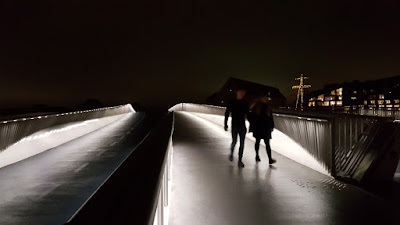 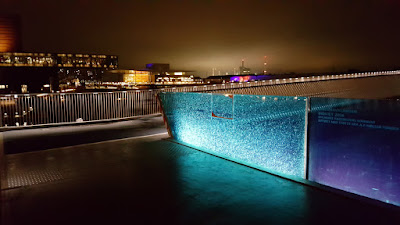 Posted by The Happy Pontist at 8:12 PM

Are there any videos of the bridge opening? I haven't been able to find one so far, not even a photo.

I thought I remembered seeing a retractable bridge in France, but the St Nazaire one must have been demolished long ago. It was bothering me, and finally I found it was at St Malo:
https://goo.gl/maps/AqbyNiTJrdP2

There are no barriers at all for pedestrians at the sliding end. Once the bridge is open, the parapets block the footpaths, but you can stand right next to it to watch. I have a memory of a man just about to step onto the bridge when it started to move, at which he nonchalantly walked off in a different direction. They don't seem to do "health and safety" in France!

The selection of blue and yellow glazed panels seems provocatively Swedish, given the lack of colour elsewhere - at least the red and white warning stickers echo the colours of the Danish flag.

A video of the bridge opening and closing can be found here: https://www.youtube.com/watch?v=vJafdcHP73k