I've been thinking for some time about writing a few articles about unbuilt bridges, but it turns out there's so much good material elsewhere on the internet that I'm better off directing you appropriately.

The best online resource for this is the "Ian Visits" blog, which has uncovered a cornucopia of unbuilt London architecture, including bridges.

A feature on Victorian railway stations that tried to span the Thames discusses unbuilt railway bridges (and stations) at Pimlico (pictured) and Waterloo. These early proposals came to nothing, and it's only with the recent remodelling of Blackfriars Railway Bridge that a railway station has finally been extended to span both banks of the River Thames.

The Victorians were also responsible for an 1852 proposal to run a railway viaduct not across the Thames, but along it. This structure was proposed to run between Westminster and London Bridge, and can be seen as a forerunner of what is now the District Line, built in a  tunnel below the north bank of the Thames.

At the end of the 18th century, a number of proposals were invited for the replacement of Old London Bridge. The scheme eventually selected would not be completed until 1831, but some of the alternative designs are interesting. Thomas Telford proposed a 600-foot span cast iron arch (pictured), which would have been a tremendous technological achievement if built. Creating suitable foundations to withstand the arch thrust in London Clay would have been a significant challenge! "Ian Visits" also discusses George Dance's proposal for two parallel bridges.

Thomas Dunn was the engineer behind a proposal for a remarkably modern looking iron footbridge at Ludgate Hill in 1863. Before traffic signals brought order to the city streets, Dunn's design was for a walkway-in-the-air, allowing pedestrians to cross a busy road junction without the inconvenience of having to cross overcrowded and dangerous highways.

Over the years, there have been various proposals for a new bridge across the Thames near St Paul's Cathedral (see my previous posts for some examples). "Ian Visits" documents a 1909 proposal for a road bridge, and the amusing 1997 design from FAT for a kitsch garden bridge in tribute to the late Princess of Diana (pictured). This one was ahead of its time, I think, the market for ironic monuments to celebrity has surely expanded further over the last two decades. 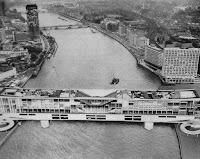 There have been plenty of proposals for inhabited bridges across the Thames over the years (again, some of which I've covered in the past). It's a perennial theme from incurable nostalgicists blithely unconcerned with the visual impact of what they design. One such proposal was the Crystal Span Bridge, a 1963 proposal to replace the Vauxhall Bridge with a seven storey monstrosity complete with gallery, roof garden and ice rink.

Further curiosities include a proposed elevated viaduct along Oxford Street, to allow the area below to be pedestrianised, and a high-speed travelator for London Bridge.

What unites most of these unbuilt bridges is simple: we can be glad they were never built, given the number of potential eyesores avoided!

See also Unbuilt London: Bridges To Nowhere And Mad Masterplans at the Londonist.
Posted by The Happy Pontist at 8:47 PM

On the subject of the 1909 St Paul's Road Bridge proposal, would it accurate to assume the road leading up to the south side of the Thames onto St Paul's Bridge (had it been built) would have originated at Elephant & Castle?