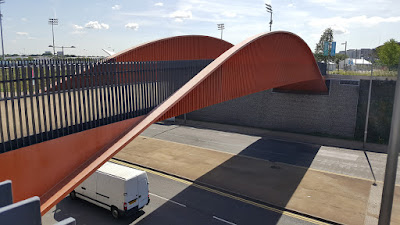 I've covered most of the interesting bridges built for London’s 2012 Olympics on previous occasions, but there are two structures that I’ve been waiting for a chance to visit for some time. Now, that chance has come, and the first of the pair is the excitingly named "Footbridge L01", designed by Atkins and Allies and Morrison.

This bridge carries a foot and cycle path above the busy Ruckholt Road, a major highway in the east of London. To the south, the path leads to the Olympic Velodrome, and to the north, the playing fields of Hackney Marshes.

I don't know how well the path was used during the Olympics, but it was not a popular route when I visited, mid-morning on a sunny weekday. For a while, I wondered if I would be the only person to cross it!

The bridge spans 42m clear across the highway, and is in the form of two tied arches. The arch ribs are single steel plates, some 90mm thick, while the deck consists of ribbed steel plate (topped with concrete) spanning transversely between small box section tie girders. The tie girders are suspended from the arches by 25mm thick steel slats.

When I go to visit bridges, I often have a number of questions in mind. These are sometimes the 5 Ws of basic journalism: Who? Where? When? What? Why? When applying these to bridges they can be informative e.g. What is it actually for? The additional sixth question of "“How?" is often more useful when considering engineering and design: How does it address its purpose? How does it stand up? How does it articulate?

For me, this is a "Why?" bridge, although this question is deeply entwined with the "What?" and "How?" As originally conceived by the designers, the bridge was a tied half-through arch, with the arch ribs passing below the deck level at the bridge's ends. Why it was conceived this way, I certainly don't know, it would seem to have made more sense for the arch and tie-girder to meet at the span support points, as is normal in half-through tied arches.

It was clearly not a straightforward bridge to design, as set out in various interesting technical papers by Atkins. The close spacing of the hanger slats (at 135mm centres) means that their aggregate in-plane bending stiffness is significant, enough to act as a Vierendeel girder restraining the arch rib against in-plane buckling. This inevitably leads to complexity in the structural analysis.

Below deck level, the arch rib was originally proposed to fly clear i.e. unconnected to the deck. However, the designer’s analysis showed this would not be feasible, as the arch rib would be too slender and would buckle in compression. The obvious solution is to use the vertical slats in these end zones, but as compression struts rather than as hanger plates. Again, however, the vertical slats would buckle, as they are too slender to carry any useful compression loads.

This answers one of the bridge's several "Why"s, the question of why the end-zone elements below the bridge deck are in solid plate – this internally stiffened plate can carry vertical compression, and it's there to prevent the below-deck elements of the arch rib from buckling.

Before visiting the bridge, I anticipated the effect of both these engineering compromises would be awkward. This is, I think, true only to an engineering eye expecting a single clear structural rationale. I think in practice that the arch can be seen as springing not from its end supports but from the nodes where arch and tie-girder connect i.e. the main piece is held aloft in mid-air by giant orange corbels.

Another way to see these compromises positively is to see them as framing the central part of the bridge, while allowing the bulk of the structure to be visually transparent. In short, it’s an oddity, but not a complete failure.

Transparency on this bridge is only ever relative. Seen from the highway below, the hanger arrangement is reasonably transparent, with only the horizontal bar of a handrail indicating that this is as much a balustrade as a structure or a screen. While crossing the span, the bridge user exists within a local "bubble" of transparency, able to see clearly to left and right, but with their view obscured when looking at an angle. This "bubble" stays with the observer as they pass across the bridge. This louvre effect is something that can be exploited usefully where there is a need to balance issues of privacy screening and transparency, neither of which apply on Footbridge L01.

Setting aside the overall structural form for a moment, the bridge is well detailed. In particular, the approach parapets use the same slat type and spacing, albeit painted in black rather than in blazing orange. This is highly effective, and the simple continuity of the handrail element plays a positive role as well.

The substructure adopts the robust finish used elsewhere in the Olympic park: prison-style gabion baskets, here hiding a concrete support structure which is integral with the steel superstructure. Mountainous earthworks behind the grey retaining walls were hopefully used to avoid off-site disposal of spoil from excavations, as otherwise their scale is quite unnecessary.

I've left the most significant "Why?" for last, which is to ask: Why this, rather than something else?

Here I find it harder to quell a persistent nagging feeling that there was simply no especially good reason to adopt this peculiar hybrid of tied-arch and Vierendeel slats. An arch bridge is certainly an appropriate solution for the span, where a gateway structure will initially have acted as an entrance signpost to the wider Olympic site. A slender arch rib is an admirable aim, but could as readily have been achieved with, for example, a network arch design.

I suspect here that there is a degree of both affectation and of muddle: a specific notion taken to its logical conclusion, however difficult the resulting structural engineering, and a notion that is something of a muddle between architectural and engineering aspiration. There's a phrase in one of the papers on the bridge which I think may be revealing and which certainly suggests a certain kind of design relationship: "The key challenge of the design was resolving the structural integrity of the bridge without compromising the architectural vision".

Nonetheless, I enjoyed visiting Footbridge L01. In particular, the bold juxtaposition of orange and black seems quite apposite for what will for most tastes be a marmalade and marmite experience. I like the use of colour, I like the bridge detailing and I admire the willingness to depart from what might otherwise have been quite a humdrum, conventional solution.

Posted by The Happy Pontist at 7:55 PM