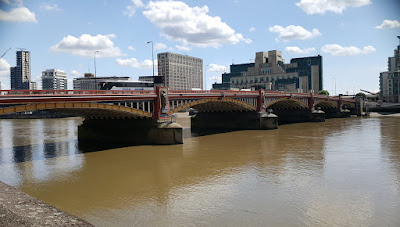 This is the third and last in this latest series of posts on the bridges of London.

Vauxhall Bridge sits on the site of a pre-Roman structure within the River Thames, only discovered in 1993 when shifts in the riverbed exposed its wooden piles. From that structure's demise until 1816, the only crossing of the river at this point was via ferry.

In 1806, engineer Ralph Dodd campaigned to build a new bridge at the Vauxhall site, leading three years later to the passing of an Act of Parliament and the creation of the Vauxhall Bridge Company. Dodd's 13-arch bridge design was, however, rapidly dropped in favour of a 7-span stone arch design by John Rennie. This then proved too expensive, and approval was obtained via a further Act of Parliament to construct an iron bridge instead. Rennie proposed an 11-span iron bridge, but a 9-span cast iron proposal from Samuel Bentham was preferred.

In its turn, Bentham's design also fell out of favour, and the bridge eventually completed in 1816 comprised nine cast iron arches supported on stone piers, designed by James Walker. This bridge proved highly successful, and was eventually taken into public ownership in 1879. However, by this time, the bridge foundations were in increasingly poor condition, and in 1895, permission was granted to replace the structure.

The new bridge also went through several incarnations before being built. Alexander Binnie's initial steel design was not popular, and he then proposed a 5-span granite-clad concrete structure. Work began on this, but problems during construction of the foundations led to a change in plan: it was decided that the concrete bridge was too heavy. The granite-clad concrete foundations and piers were completed, but Binnie and Maurice Fitzmaurice designed a steel arch superstructure instead, which was finished in 1906. This is the bridge that can be seen today. 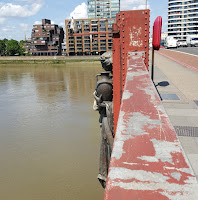 The new bridge attracted further controversy even before it was complete. Complaints about the engineer-led design led to a decision to install statues on the bridge piers, four on each side of the bridge. The downstream statues by Alfred Drury represent the themes of Science, Fine Arts, Local Government and Education. On the upstream side, statues by Frederick Pomeroy illustrate Agriculture, Architecture, Engineering and Pottery.

Many users of the bridge will not even realise the statues are there: they face outwards to the river. They are visible from the river bank, but for a close-up view you either need to get into a boat or lean over the side of the bridge.

The bridge originally had wrought iron railings on each side, but these were replaced in 1973 with the squat parapets seen today. These are at least shorter than the original railings, which were some 8 feet tall! This was before the bridge achieved Grade II* Listed status, which only came in 2008, as part of a group of London bridges.

Apart from the parapets, Vauxhall Bridge is an attractive structure when viewed from the river. I think a large reason for this lies in the paintwork, which has been arranged to highlight a hierarchy of elements, with the riveted steel arch ribs in yellow, spandrel stanchions in white, and red, white, blue and yellow all used in different parts of the stringcourse and parapets.

There are thirteen arch ribs in each span, and the span dimensions vary from 45.6m in the centre span, via 44.0m in the intermediate spans to 39.8m in the end spans.

What struck me most about the bridge was its sheer width. It accommodates two footways, a two-lane cycleway, a bus lane, and a four-lane highway.

This is a major traffic artery, and there are further major highways running along the river at both ends of the bridge.

The result is a bridge that makes it easy cross the river, but which also plays its part in creating division, as it's almost easier to cross the river from north to south than it is to cross the bridge from east to west. Seen from the river, it's like a giant staple connecting the two river banks. Seen from above, it's like a giant pair of scissors, helping to subdivide London into smaller and more navigable city blocks. 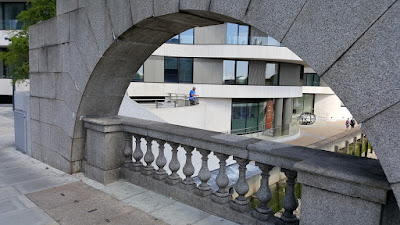 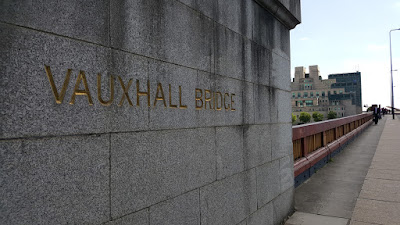 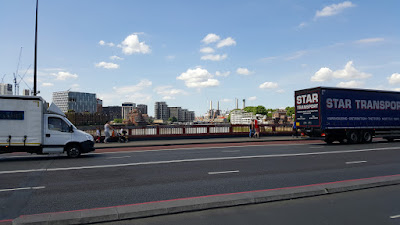 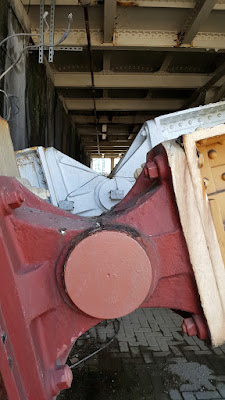 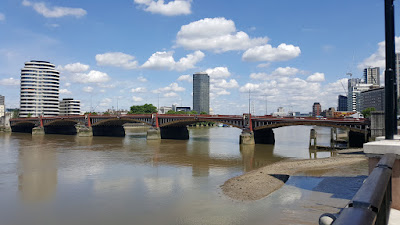 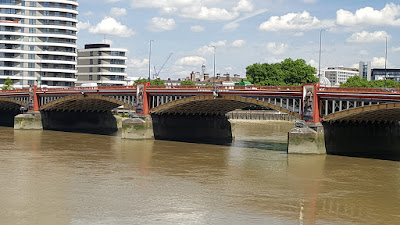