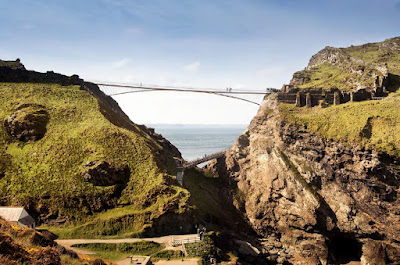 An application has been made for Planning Consent for a new footbridge at Tintagel Castle in Cornwall.

The last time I featured this project was to discuss the six shortlisted competition entries back in December 2015. In March 2016, the winner was announced as Ney and Partners with William Matthews Associates. The scheme is for a new bridge to take visitors onto the Tintagel Castle promontory, a beautiful and deeply historic site. The bridge will provide access for the mobility-impaired for the first time.

You can find the full planning application online, but I've extracted some of the pertinent material to share here. 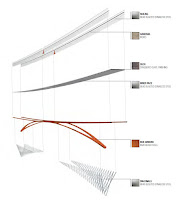 The bridge gives the appearance of being a very slender arch structure, but in fact it is formed of two giant steel cantilevers, each shaped with a parabolic curve in elevation. In theory, this means that the lower rib carries a constant force when the bridge is subject to a uniform load, allowing for an efficient use of structural steel. In practice, things are never so simple.

The lower and upper ribs each comprise two weathering steel fabricated box girders. These span 66.7m in total. The cantilevers are not quite symmetrical.

The upper ribs are parallel, with the 3.0m wide structure supporting a 2.5m wide walkway. At midspan, these ribs are a mere 175mm deep, impressively slender by any standard. The lower ribs converge towards their foundations, and are also exceptionally small, being only 140mm deep over most of their length.

The structure's strength comes from the depth of the twin cantilevers, which reaches 4.4m near the supports. The upper and lower ribs are connected by what the designers refer to as a "Thomas Telford" detail, for reasons which should be obvious. These spandrel lattices are formed from solid stainless steel bars varying in cross-section from 30mm square to 65mm square.

The structural dimensions illustrate a peculiar talent that Ney and Partners seem to have for exploiting design standards to their absolute limit, and creating structures of astonishing slenderness. The total weight of the steel structure is stated as 66 tonnes, which is quite amazing for this span. It's no surprise given the slenderness to read that the bridge's first natural frequency is 1.6 Hz (well into the vulnerable area for pedestrian excitation).

The bridge deck consists of slates placed on edge in a sand bedding layer, carried on stainless steel pans supported between the primary structural ribs. The pans have drainage scuppers in the soffit, and there is an air gap between the deck pans and the main ribs to ensure the weathering steel can weather properly.

The bridge foundations are proposed as rock anchors for both the compression (lower rib) and tension (upper rib) elements, with additional rock anchors used to stabilise the exposed cliff faces. 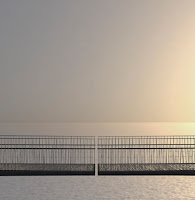 The gap in the middle of the bridge is nominally 42 mm, reducing to 5 mm under maximum temperatures, and increasing to 85 mm under minimum temperatures. There's clearly a degree of controversy to this particular detail, given the risk of a trip hazard or simply the discomfort caused to visitors already made anxious by height and exposure. 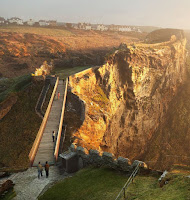 At competition stage I observed that significant differential deflections could also be expected when one cantilever was loaded more than the other (by pedestrians or by wind), but the planning submission makes clear that the two cantilevers are in fact connected by shear pins, in a similar manner to a twin-bascule bridge.

I think the poetic idea behind the gap justifies the problems that it creates: the intention is to make intensely apparent the sensation of stepping from the present into the past, of the division between the Tintagel Castle and the mundane world. 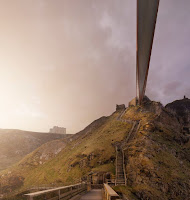 The designers have also sought to address the other major objection raised at competition stage, which was to the adoption of weathering steel at an exposed coastal site, where the wind will blow salt spray high above the sea. They have instituted a series of corrosion tests on steel plates exposed at the project site, and the planning submission documents make clear that if these are unsuccessful, the weathering steel will simply be substituted with conventional painted structural steel.

However, there seems to be little acknowledgement of the bimetallic corrosion issue created by the use of so much stainless steel and weathering steel connected together. This combination will tend to lead to accelerated corrosion of the weathering steel at connection points, especially if moisture and salts are present.

Results of the on-site salt spray corrosion tests were due to be completed in June 2017 so it would be very interesting to see the results. 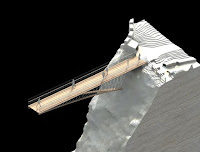 An article in The Guardian focuses on what appears to be increasing opposition to the entire idea of a bridge and captures some of the key issues. If you visit the planning consent website, it's clear there are numerous objectors.

One that's particularly worth reading is from Cornish bard, Bert Biscoe, arguing that whatever the merits of the particular bridge design, they cannot outweigh the damage that will be caused to a site of major archaeological importance. The argument is not about the physical impact of the bridge, but about the very desire of the site's custodian, English Heritage, to increase visitor numbers in such a sensitive site. This is an argument about the merits of preservation over the merits of public access - it is intrinsically anti-populist, but perhaps necessary.

I have been to Tintagel and my initial feeling about the bridge was that the improved accessibility would be very welcome. The promontory is currently accessed via a low-level bridge and a series of awkward steps, which are very difficult for some visitors to traverse. The planning submission notes that some 15% of visitors who buy a ticket for the Castle never actually make it up the existing steps onto the promontory.

However, the bridge is no panacea for this, as there will still be areas which are only accessible via steps or very narrow paths. It's therefore legitimate to consider whether the adverse impacts of such a major intervention are justified by the benefits.

I will be very surprised if the bridge fails this initial planning consent hurdle. However, Scheduled Monument consent will also be required, and I expect opponents of the scheme will petition central government to call in the entire planning application for further review, such is the sensitivity of the site

I think the designers involved have done an excellent job in addressing the site constraints, within the limits of their brief, and this will be a very interesting project to follow, especially if it proceeds all the way to be built.
Posted by The Happy Pontist at 11:40 PM