From Tomatin, we drove north towards Inverness. Our Scottish bridge tour's first day was drawing to a close, although Inverness itself had at least half-a-dozen more bridges lying in wait. 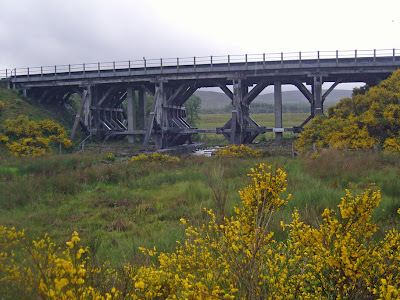 The railway to Inverness passes over a small stream on the Aultnaslanach Viaduct. Opened in 1897, this was built as an all timber trestle structure, supposedly because of difficulties with foundations for a heavier bridge. The ground is certainly quite boggy here, and it was difficult to walk even the short distance from a nearby minor road across to the bridge. 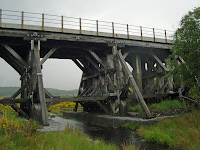 I visited this bridge several years ago, after first reading about it in Gillian Nelson's excellent Highland Bridges. It's a very rare survivor, as most timber railway bridges from the Victorian age were rebuilt long ago, most obviously Brunel's timber viaducts in Cornwall. Several still survive in Wales, although they are slowly falling prey to "progress" (e.g. Pont Briwet, approved for demolition earlier this year despite its protected  heritage status). 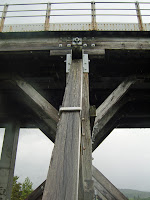 The bridge's five spans are each about 20 feet long. The four trestles each have four vertical posts, and two raking posts, supplemented by raking outriggers, and they are further connected to the longitudinal beams with knee-braces, resulting in a distinctive series of octagonal bays when viewed on elevation. The trestle posts are fixed to timber piles penetrating 25 feet through a layer of peat to underlying gravels. Like the Broomhill Bridge visited earlier, it's a primitive design, robust and delightfully un-pretty. There's an excellent archive drawing to be found online which shows the bridge's layout in detail. 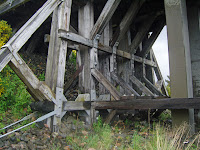 The bridge was found in the mid-1990s to be suffering from wet rot, with a number of timber samples showing moisture at levels well above the 20% rotting threshold. Actual removal of timbers from the bridge failed to confirm this finding, and a structural assessment found the trestles to have sufficient strength for the railway loads applied. Indeed, monitoring of the bridge while trains passed showed only minimal deflections, less than 2mm at the top of the timber posts. At that time, it was proposed to remove individual timbers thought to be suffering most from rot, and to replace them. 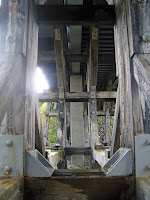 Sadly, the powers-that-be decided that repair was not the best long-term answer, and a £2.6m project was undertaken to "refurbish" the bridge in 2002. By this time, it was reported that rot was causing some timber members to suffer from up to 40% section loss, and a 40mph passenger traffic speed restriction had been in place for several years. The work essentially consisted of gutting the bridge, replacing its previous corrugated metal deck with a conventional steel girder railway bridge, and supporting this on concrete support piers. An image of the bridge under reconstruction shows what was done. Clearly, whatever foundation problems had troubled the original builders were no match for the modern railway engineers. The new bridge was inserted in the middle of the existing bridge, allowing the vast majority of the timber frame to be left in place surrounding it. A German firm was brought in to inject the timber with a new chemical preservative treatment. 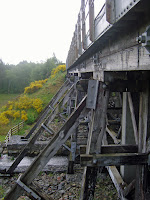 The new bridge piers were positioned midway along the 2nd and 4th spans of the bridge. While this eliminated the need to modify the main trestles, it has the unfortunate effect of ruining the bridge's appearance in elevation. The timber elements are essentially now redundant, and it's hard not to imagine that deprived of their load-bearing function, they will receive less maintenance in the future than if they still carried the trains.

The project won a series of awards, most notably a National Railway Heritage Award, a "conservation" commendation from the Saltire Awards, a British Construction Industry Award, and it was a finalist in the Prime Minister's Better Public Building Awards. From one point of view, it is ingenious how they have hidden the new bridge in the belly of the old, thus preserving as much of the original fabric as possible.

From another perspective, this was a catastrophic intervention, turning the historic timber structure from a heroic survivor into a mere decoration. Looking at it, I find it very hard to believe it could not have continued to carry railway vehicles, with the original timbers replaced individually where necessary. It looks to me like the railway saw an opportunity to be rid of a long-term liability, short-term expediency triumphing over any serious desire to preserve an exceptionally rare historic structure.