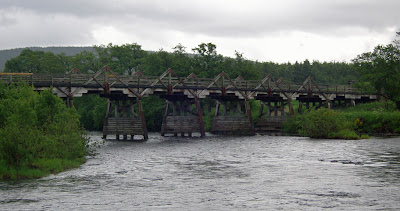 The first day of our Scottish bridge trip was still fairly young. From Dunblane, we had been to Callander, then Aberfeldy and Pitlochry. We then drove further north, up the A9, past Aviemore, and on to Speyside. The next bridge on our list was Broomhill Bridge, described in John Hume's seminal 1977 book 'The Industrial Archaeology of Scotland' as "the finest wooden bridge surviving in Scotland". 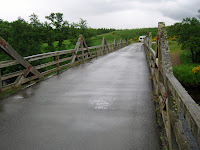 Built in 1894 to replace an earlier bridge which had washed away, the bridge carries a minor road over 15 spans across the River Spey. The engineer was John MacKenzie and the contractor was Charles MacKay. It's remarkable that an all-timber structure has survived this flood-prone river for so long, although the bridge was partly rebuilt in 1987.

The bridge has an interesting combination of superimposed structural systems. 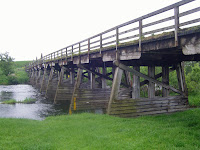 The trestle piers are fairly straightforward - each has five posts, with the outer ones raked for stability and to resist water flow. Overall stability is assisted further by cross-brace members. Planking prevents debris getting trapped between the legs, and metal covers protect against debris impact on the upstream posts. 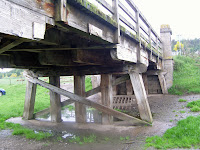 The piers are topped with timber crossheads which support the five main longitudinal timber beams of the deck. Over the piers, the five main beams are doubled, cantilever-style, so that the effective span is reduced. 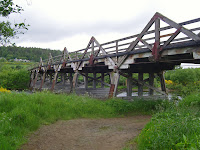 For the main river spans, a third doubler beam is added, and the whole thing supplemented by triangular king post trusses on the outer faces of the bridge. These are built in line with the timber parapets, and essentially serve only to suspend a further point of support for the span.

The central truss post holds an underslung crossbeam which passes the full width of the deck. Thrusts from the main truss members are resisted by a simple iron "bowstring" bar. 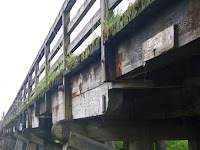 The bridge is clearly an antique, and much of its charm comes from the "thrown-together" appearance of its various components. In some ways it has more in common with American timber bridges, or even Bhutanese timber cantilever spans, than anything else to be found in Britain. Equally clearly, it was a carefully thought out design. I doubt whether an equivalent in steel would have survived so well. 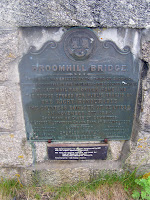 One thing that is particularly pleasing to see is how little altered the bridge has been. Council engineers have resisted the temptation to bring it in line with modern standards (which, in particular, would prohibit the use of main structural trusses as part of the bridge parapet, in case they are hit by vehicles, bringing down entire spans).

While this may just seem like common sense, such pragmatism is often in short supply amongst the jobsworths of the engineering profession. In about 5 bridges time, I'll be featuring another Scottish timber bridge which has fared far less well at the hands of modern engineers.

Posted by The Happy Pontist at 9:44 PM

Broomhill bridge used to be more elegant.
I have 1933 photo of it, looking downstream from the Nethybridge side.
I'll be happy let you have a jpg of it if you tell me where to send.
Regards,
John Blomfield