The village of Tomatin is dominated by the presence of two massive viaducts which cross the valley of the River Findhorn nearby. This photo shows them both visible from the nearby Findhorn Bridge. 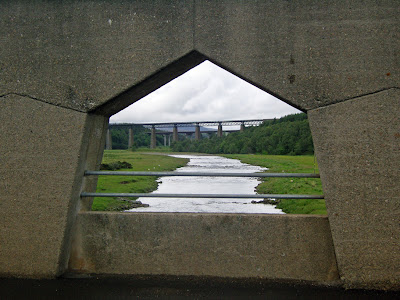 The first of these is a railway viaduct, variously described as the Tomatin Railway Viaduct or the Findhorn Viaduct. I've gone with the latter as that is after all what the bridge was called on an original drawing from 1890. 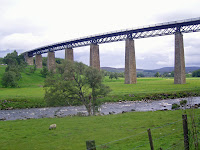 The bridge opened in 1897 as part of the Highland Railway. The engineer for the railway was Murdoch Paterson, and the bridge engineer was John Fowler. The bridge's nine spans total 405m in length, and the viaduct is up to 44m tall above ground level. 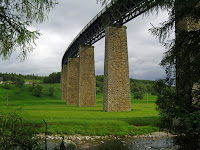 The bridge deck comprises two "double-Warren" steel trusses, which sweep across the valley on a gentle but dramatic curve. John Fowler, of course, is best known as the designer of the Forth Railway Bridge, and the Findhorn Viaduct has several similarities, both in the use of the double-Warren arrangement (two superimposed sets of "V"s making up an "X" arrangement), and the use of tapered stone masonry piers. The approach viaducts at the Forth have both these features.

In November 1898, the Inverness Courier described the bridge as follows:


"The Viaduct across Findhorn Valley and river, of which it commands magnificent views, is 1335 feet in length, and its maximum height is 140 feet. It has a rise of 1 in 60 from north to south. The superstructure is of steel, resting on native granite piers, of massive and towering proportions, which have their foundations on immense blocks of concrete, those in the river bed being also supported by deeply-driven wood piles. The Viaduct has a graceful curve of a half-mile radius". 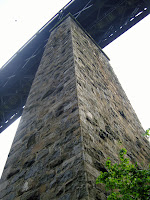 I think it's a remarkably elegant bridge. The tapering piers may have a structural rationale (the weight of the pier itself increases vertical loads at the bottom, which should therefore be larger in cross-section if it is to carry equal stress to the top), but are also visually very attractive, helping to emphasise the bridge's height. The uniform linearity of the deck makes it feel less heavy overall than a haunched design would. It's a remarkably modern-looking design.

In fact, I think it's one of Britain's finest metal railway viaducts.

Hello, I like the first photo of the framed image.

Yes, I've been to the Culloden Viaduct before. Not on this trip, though.