I was in Liverpool recently, and visited the Prince's Dock Footbridge (pictured below).

Built in 2001, this was the winning design in a competition run jointly by the Prince's Dock Development Company and the Liverpool Architectural Society. The contest was won by architectural student Eduard Ross, aged 23 at the time, who teamed up with his tutor Ian Wroot and structural engineers Arup to bring the design to fruition.

It's a very unusual, assymetrical design, comprising a steel wishbone arch spanning 30m, supported at one end on curved rib members, T-shaped in cross-section, with a bowstring tie hidden behind perforated cladding panels. The ribs also support the bridge deck. It seems almost impossible to understand how it works just by looking at it, but perhaps the various design details I've included will help (all taken from a 2001 Architects Journal feature). 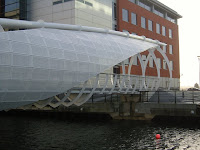 The arch members are 406mm tubes, with the deck spanning transversely between 168mm tubes. The 2.55m wide deck consists of aluminium planks, and the cladding is powder-coated aluminium. It all looked in good condition when I was there, perhaps it was refurbished when it was recently altered to ensure that boats could pass underneath as part of the Liverpool Canal Link scheme.

There are aspects to the design that I definitely enjoy. The overall structural form, the wishbone arch both hung from and hanging curved ribs is clearly reminiscent of some great cetacean skeleton, although I don't think Prince's Dock was historically home to Liverpool's whalers. I like the opportunities that the assymetrical geometry gives to vary the ribs, it makes the bridge a more dynamic experience, and with a directionality not always found in bridge design. 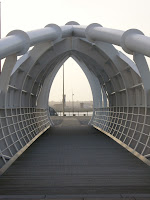 The bridge only really makes sense as a portal onto the Mersey estuary (shown left). Is the inspiration a whale's rib cage? A mediaeval ogival arch? Or perhaps something more sexual? Whatever, the bridge seems to prefer one-way traffic, with the raised wishbone also providing a clear pointer as to which way to go.

The reverse view is closed down, narrowing, darker (shown below right). It's more a tunnel than a gateway, an effect clearly accentuated by all the 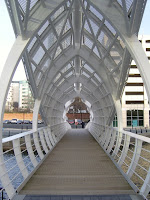 cladding panels, perforated or not. I find these odd - they are in no sense functional (neither sheltering against rain nor protecting against wind), but it's hard to imagine that the bridge would look better without them. I think they look pretty good, although as a structural engineer I also think it's a shame that they help to hide how the bridge actually works (by obscuring the arch's bowstring tie). 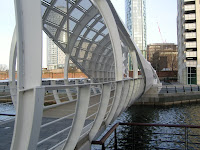 I'd love to know more about how the design came to be. I'm fairly certain that both structurally and visually, it's unique, and I guess that may have been something to do with the naivety of an architectural student unconstrained by having a structural engineer looking over his shoulder. While that approach quite often leads to poor designs, in this instance I think it has proven a success. 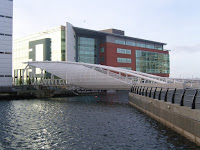 The initial concept has also clearly benefitted from careful detailing, and close attention to the geometrical logic of the structure. The only real oddity is the absence of some of the ribs below deck level at one end. I believe these have been cut off when the bridge was recently modified to allow boats to pass below as part of the Liverpool Canal Link. That's a shame, but the alternative of raising the entire bridge would have required more extensive and hence expensive modifications of the dock banks.

The bridge was clearly built to help facilitate development of the dockside, but from what I could see on my visit, development stalled, with a number of office and hotel buildings completed, and a couple of apartment buildings looking very isolated. One side of the dock is occupied by waste ground in the guise of a surface car park. All this despite being only a few hundred metres from the Royal Liver Building. A bridge like this needs to be the centre of the action, and there was very little of that when I visited.

Posted by The Happy Pontist at 8:53 PM