From the delightfully-named treehugger.com, I read about Norwegian artist Vebjørn Sand's contribution to the culture-fest surrounding the current Copenhagen climate talks.

It's a bridge spanning 15m and reportedly made from Antarctic ice: the idea being that while delegates squabble, they can look out the window and watch "Antarctica" melting. It's the artist's fourth such Ice Bridge (others having been erected in Greenland earlier this year, outside the UN building in New York in 2007, pictured above left, and in Antarctica itself in 2006, pictured right).

I think it's a great idea, very beautiful, and made all the more effective by its necessary ephemerality.

Leonardo's sketchbooks (not just the one extracted here) show that he had a sound intuitive understanding of how an arch behaves, but his proposals came two centuries before any recognisably modern theory of arch analysis was developed (Philippe de La Hire's method of 1695 being perhaps the first). The span was also ambitious to say the least: the longest arch before da Vinci's time was the 72m Trezzo sull'Adda bridge, and that was unusual, with very few arch bridges of the period exceeding 30m to 40m in span. That record wasn't broken until 1903 (Paul Séjourné's Adolphe Bridge, at 85m), and even today, the largest masonry arch bridge remains the 146m span Shanxi Danhe Bridge in China, a little over half the span proposed by da Vinci. 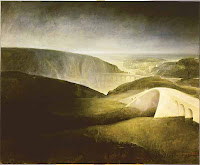 So Leonardo's proposal (artists impression pictured right) was more than merely ambitious, it was truly fantastical. In 1502, even to build the timber centering required for such a bridge would have been impossible, and it seems unlikely that foundations could have been created to contain the gargantuan horizontal thrust and hence prevent the Golden Horn design from collapsing.

Nonetheless, the Golden Horn bridge has an undeniable romantic appeal, much of it entangled with the myth of da Vinci's genius. For Vebjørn Sand, seeing the Leonardo sketch inspired him to try and make it a reality, to see whether renaissance imagination offered a bridge between art and technology that remains relevant today. Since his artistic project's inception, the idea of the bridge as a cross-cultural symbol has taken on added resonance (designed in Europe to be built in the Islamic middle-east, the Golden Horn design could be seen either as an ecumenical hand of friendship, or a symbol of Western ideological imperialism, perhaps). 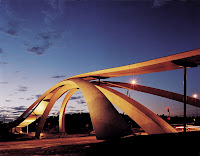 Sand has proposed to build one new version of the Leonardo design in every continent of the world, but other than Antarctica (and the temporary ice bridge in New York), the only one completed so far is at Ås, near Oslo in Norway, built in 2001 (and pictured, left). Costing £930,000 (about £3,000 per square metre of deck) this bridge was built from laminated timber, and spans 40m across a highway. It's 109m long overall, and 2.8m wide between handrails.

It's not a scale model of Leonardo's design, but an interpretation of it. The central, and both lateral supporting arches, faithfully reproduce the lines and proportions of Leonardo's sketch, and appear to mimic his design intent, with the bridge effectively widened at its springings to permit a more slender crown to resist lateral wind loads. 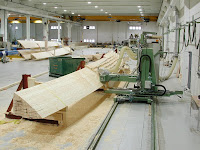 The arches are made from glulam beams, milled to achieve a triangular cross-section, while the deck is of stress laminated glulam. It looks a little like a stressed ribbon structure, but it isn't really: the deck spans continuously between the intermittent steel supports.

There's some concern over how durable it will be: the timber has multiple preservation systems, including the use of sacrificial boron inserts near the foundations, but some fissuring below the wearing surface was apparent even in 2003.

Although in many ways it's a beautiful bridge, especially when lit at night, from many angles it seems to me to be visually confusing, and the pale timber does not look quite so spectacular in the day time. Nonetheless, it's a remarkable structure - there can't be many (if any) other instances where a five century old bridge design has been given new life in this way. 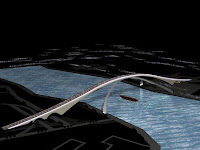 Although Sand has so far failed to get any other permanent "Leonardo bridges" built, plans are reportedly afoot to build the da Vinci bridge at its original Golden Horn site. The Turkish prime minister has given his blessing to the idea, stating that plans would be launched when Istanbul becomes European City of Culture in 2010 (the City of Culture festivities will also premiere an opera, The Leonardo Bridge, by Daniel Nazareth). Architect Bülent Güngör of BDesign has been appointed to develop the bridge design, with a concept that talks about "pre-stressing steel girders" "covered with sandstone". That sounds more than a little unfortunate when set next to the Ås bridge, and BDesign's concept images (see above right) also lack inspiration.

I suspect the Turkish scheme may come to nothing, but if it goes ahead I hope they go for a design with a little more in the way of structural integrity. I also hope that Sand does make progress with his Leonardo Bridge Project, as both the ice structures and the Ås footbridge make it clear that da Vinci's design has plenty of potential when treated as an inspirational template.