Both the charities profiled in the last two posts have made good use of technical support and advice from Swiss NGO Helvetas. Founded in 1955, Helvetas operates a number of aid programs in 18 of the world's poorest countries, principally aimed at rural development, drawing on a mixture of government and private funding (they have an annual budget of about 59m Swiss francs).

In Nepal, they support a number of activities promoting modern agricultural technology, expanding irrigation systems and employment training. Over two-thirds of the 27 million Nepalese live on less than US$2 per day.

Of interest here at the Pontist is their Trail Bridges Sub-sector Project (TBSSP), which has supported the construction of over 2000 rural bridges throughout Nepal since its inception. In the monsoon season, up to 50% of rural Nepalese roads are severed due to the lack of bridges, so these structures are a vital ingredient in supporting rural communities and building a more resilient economy. The image on the right is courtesy of féileacán at flickr, as are the other images below where not credited otherwise.

Nepal of course is famous along with Bhutan for their cantilevered log bridges (like this one), but these can span only a relatively short distance and can be vulnerable to damage when rivers rise.

The idea to use more modern bridges did not originate with Helvetas: in the early part of the 20th century, a number of metal suspension bridges were designed by Scottish engineer Louis Harper, and shipped from Scotland to Nepal (see image on the left borrowed from the excellent Harper Bridges website). As is acknowledged in a potted history at the TBSSP website, only a small number of bridges could be built this way. 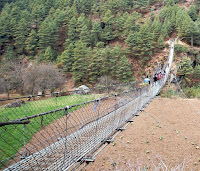 The TBSSP's dedicated website has plenty of information on their activities including a detailed database of completed structures. At present, between 140 and 180 new bridges are built every year, which puts the activities of Bridges to Prosperity and Bridging the Gap into perspective. Key to the TBSSP's success is that it is less about building bridges, and more about fostering the capability for the local people to do so. Over 30 colleges teach skills related to the programme, and bridges are to a large extent now designed and built by local consultants, fabricators and contractors. This is the culmination of many years of effort: this kind of infrastructure hasn't appeared overnight.

The TBSSP now largely concentrates its efforts on enforcing a national strategy on which types of bridge to build and how, promoting proper maintenance of the existing bridge stock, and developing new bridge types which could support road as well as foot traffic.

I was pleased to find that the British connection to building Nepal's bridges hasn't entirely vanished, with financial support for TBSSP being provided by the UK Department for International Development (see interesting blog piece at DfID from where I've borrowed the photo on the left).

The Helvetas bridge designs rely on standardised lightweight metal components both for their catenary suspended bridges, and their larger suspension bridges. The shorter bridge types, without conventional suspension towers, are documented in manuals (available at the Bridges to Prosperity website), which combine detailed technical information with practical advice on how to build the structures, such as the fence weaving illustration shown on the right.

I find these to be a mine of interesting information, and although the Helvetas bridges are notoriously prone to bouncing, I keep wondering whether better use of this technology could be made in the rural parts of the developed world. There was a time when suspension footbridges were in vogue (as well as Louis Harper, the likes of David Rowell and others installed large numbers of essentially similar designs). 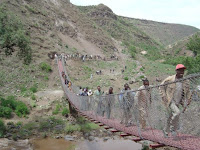 Helvetas are expanding their bridge-building programme into Africa, specifically Ethiopia [PDF](image, left, taken from Helvetas), since 2005. I think that's great news, especially as they are again concentrating on developing the institutional capacity to build bridges.

I'll return to this topic shortly, but will take a break from it for now, as I'd like to take a quick look first at a little bridge design competition currently underway in Calgary ...
Posted by The Happy Pontist at 11:02 PM