How have I never seen these bridges before?! Thanks to Dark Roasted Blend for bringing them to my attention (although they've been featured on what looks like dozens of other websites and blogs).
Here's a photo of just one of these incredible bridges in Cherrapunji, India, made by training the aerial roots of the ficus elastica banyan tree. But there are losts of even more amazing photos at DRB and elsewhere. 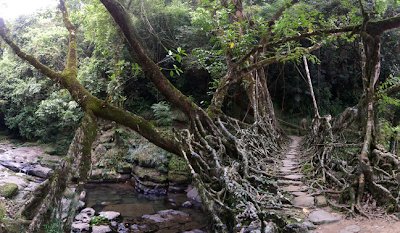 What I like about them is not just their incredibly bizarre appearance, the ingenuity involved, or their negative carbon footprint, but the fact that they get stronger over time, the opposite of most man-made bridges.
And, you can visit them too!
The Dark Roasted Blend article also has several other truly astonishing things, including the vine bridges of West Iya in Japan. Go take a look!