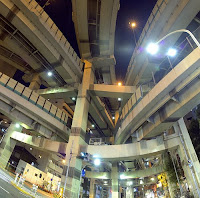 First, I'd recommend paying a visit to Dark Roasted Blend, who put up an entertaining posting just before Christmas with some spectacular images of Japanese bridges and highway interchanges, mostly along the lines of the crazy maintenance nightmare pictured on the left (image courtesy of Ken Ohyama).

There should be announcements of the winners in several bridge design competitions: River Liffey (result was due last month), River Soar (March), Foryd Harbour (May), Diglis Basin (no idea) and no doubt a number of others. Several of these haven't featured here at the Happy Pontist previously, largely because the authorities involved have kept the shortlists confidential and the publicity minimal.

A number of interesting new footbridges in the UK should open for use, including Forthside, Infinity and Tradeston. I feel fairly sure we haven't heard the last of the ever-more complicated sagas at Calgary and Sunderland either.

2009 should see the use of Eurocodes finally become mainstream for bridge design, although there's a very good chance that won't really happen until 2010. I don't think there will be many visible consequences to this in the short term (apart from a windfall for the providers of training courses), certainly not for the lay public.

For my part, the next post to appear here will be a review of an excellent book on a very singular bridge. I'm also considering a series of posts on criticism of bridge structures: how could you review a bridge itself? How would that be different from purely architectural criticism? Why is there so little public criticism of the engineering design of bridges?
Posted by The Happy Pontist at 9:00 AM