A couple of weeks ago, the architectural trade press reported a controversy on the procurement of Transport for London's proposed Canary Wharf to Rotherhithe crossing.

Following a detailed feasibility study, which looked at options for a ferry, tunnel, or opening bridge for pedestrians and cyclists at this location, TfL identified the opening bridge as their preferred solution. They undertook a public consultation, which ended in January. Meanwhile, they elected to push appointment of a design-and-build contractor to build the bridge back down the track. Instead, TfL are now looking to appoint a design team to develop a reference bridge design capable of securing consent under a Transport and Works Act Order. 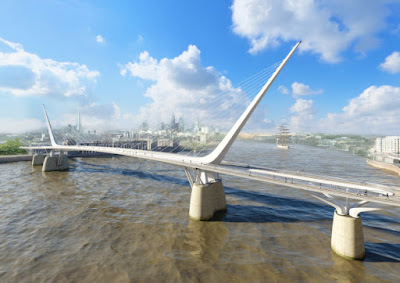 The project has a history which in some ways brings to mind the Garden Bridge fiasco. It seems that the Rotherhithe scheme was not originally TfL's idea. Back in 2013, a bridge was proposed by reForm Architects, working with engineers Elliott Wood. ReForm's concept was for a double-leaf cable-stayed bascule structure (pictured), and they devoted quite considerable effort to promoting the concept and developing it further.

ReForm teamed up with cycling charity Sustrans to undertake a feasibility study, which demonstrated clearly that a bridge at this site could be highly valuable (although it is notable that the 2016 Sustrans report makes no mention of the reForm concept design). Ever since, reForm have remained tenacious in promoting the project, even setting up a "Save Rotherhithe Bridge" website, and asking Buro Happold to join their team to add credibility.

Recognising the merits of the proposed pedestrian and cycle crossing, TfL set out to investigate options for themselves, appointing consultant Arcadis from their engineering services framework. Arcadis teamed up with ubiquitous bridge specialists Knight Architects. The outcome of their study forms part of the public consultation material, with a clear and sensible report which evaluates the various issues without settling on a definitive solution.

The Arcadis/Knight report does however take against the reForm/Elliott Wood proposal, noting that a 150m span double-bascule bridge would be a world record-breaker (by some margin), while swing and lift bridges are more proven forms at this span length.

TfL are looking to appoint a team to produce a reference design (and take it through the Transport and Works Act process) from the same framework panel where they found Arcadis. At this point, reForm and Elliott Wood have cried foul, stirring up an utterly unmerited controversy in the press.

Construction News reports that there may be a "conflict of interest", on the grounds that Arcadis recommended against the bascule solution, and have therefore developed a brief which prevents competitors from participating.

It's hard to know where to begin with this nonsense. Reading the Arcadis report, it's clear that a bascule solution is not favoured, but nor is it ruled out. ReForm's problem is that they are not on the TfL framework. However, there is absolutely nothing preventing them from teaming up with one of the consultants who are on the framework. The real problem is their unwillingness to depart from their original design. TfL appear to be seeking a team who will properly evaluate the options and take forward the best one: not a team who are so committed to a single idea that they may tie TfL to an unsuitable outcome.

Indeed, the bascule design hardly seems like the best bet. 75m long bascule cantilevers will be a problem to operate in high wind conditions. The cable-stayed arrangement means that the centre of gravity is remote from the centre of rotation, with the result that energy requirements during operation are higher than for a better balanced design (such as a swing bridge or lift bridge).

Should TfL have opened up bidding beyond their framework? Again, this seems ridiculous: their framework consultants are generally large firms with plenty of expertise, and who are free to supplement their teams with niche specialists where they need to. Arcadis have no particular advantage as the incumbent, as the skills required for the previous phase may not be those needed going forward. TfL have made clear that they are looking at this stage for the right team, not a single design.

ReForm's complaint is that as a small firm, they are disadvantaged, but there is no reason whatsoever why TfL should not follow its existing procedure for procuring appropriate expertise. Presumably all the firms on their consultancy framework have already demonstrated that they can comply with TfL's general commercial and quality requirements, and will be providing further appropriate detail if they bid for the next stage.

Imagine if reForm had been appointed in place of all these firms to develop this project. Is it not overwhelmingly likely that those who had already bid for a place on the framework, jumping through multiple prequalification and tender hurdles to do so, would then be crying foul?

Indeed, if TfL were to bend over to create a way in for reForm Architects, they would be accused of exactly the same failures that allowed Heatherwick Studio and Arup to win the Garden Bridge contract in the face of better-scoring opposition. As with reForm, Heatherwick already had a concept design, and no real interest in evaluating alternatives to it.

If TfL genuinely want to do the best for their London taxpayers, then they should instead be applauded for the transparency and openness of their approach, carefully evaluating alternatives, gathering evidence, and making sure that the case for building the Canary Wharf to Rotherhithe Crossing is properly merited. Having done so, they are quite right to be considering all the options in more detail before settling on any specific design.

There is no conflict of interest here, and no real controversy.

Move along.
Posted by The Happy Pontist at 11:23 PM

Totally agree with your assessment of the situation.
It’s worth noting that Ramboll carried out the initial feasibility studies for Sustrans, starting back in 2005, that helped garner support for the bridge, determined its location, and made recommendations for the bridge type. They advised against a double bascule for a number of reasons, including those raised in your article.
Certain pockets of the architectural press appear to be pushing along reForm’s own agenda regardless of the technical merits of their proposal.

Notwithstanding the framework system does severely inhibit the ability of SMEs to win public sector work in the UK, despite successive governments saying they will tackle the problem.

The tight hold of the ever-bigger international firms on this sector denies public bodies access to specialist expertise and stifles innovation.