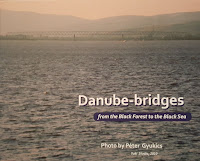 I was delighted recently to pick up a copy of "Danube-bridges: from the Black Forest to the Black Sea" (Yuki Studio, 330pp, 2010) by photographer Péter Gyukics. This is the English edition of a book also available in Hungarian and in German, which depicts every single bridge along the River Danube from source to sea.

Gyukics has two previous books of bridge photography, 2005's "Hidak Magyarországon" ("Bridges of Hungary"), and 2007's "Hidak mentén a Tiszán" ("Bridges along the Tisza"). I haven't had the good fortune to see either of those, but I am impressed by "Danube-bridges" and I would certainly like to do so.

The Danube is 2860km long, passing through or along the border of ten European countries. It winds through four capital cities: Vienna, Bratislava, Budapest and Belgrade. It has been significant both as a boundary and as a transport corridor, and today it is also an important source of hydroelectric power.

Gyukics took two years to photograph every single bridge on the main river, and the book features them in sequence from the confluence of the Brigach and Breg rivers where the Danube begins, down to the river delta where it empties into the Black Sea. He also includes bridges on the navigable side-channels of the river (such as the Danube canal through Vienna), for a total of 342 bridges shown in 962 photos. All the bridges are those that carry traffic of some sort, which is a shame as it means that utility bridges such as the spectacular gas pipe suspension bridge at Smederevo are not included.

The book is one-of-a-kind, as a combination travelogue and encyclopaedia. It's not the only photographic record of a journey down the Danube, but it is the only complete record of the river bridges. 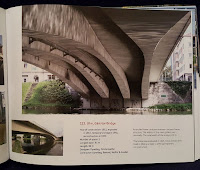 The photographs are accompanied by text from bridge experts Ernő Tóth and Herbert Träger, giving whatever factual information has been gleaned on each structure, such as year of construction, key dimensions, designer, contractor, and a description of interesting features or historical aspects. Ernő Tóth is a prolific writer on bridges in Hungary, and those interested should check out the Első Lánchíd website for more.

The book features useful maps, a detailed index, and a series of useful introductory sections, including a detailed and informative description of the river written jointly by a geologist and a hydraulic engineer.

The smallest bridge spans only 9m; the largest 351m. The bridges date from 1146 to the present day, although the majority have either been built or rebuilt within the last 75 years. This is a book of contemporary photography, so although older bridges on each site are described, there are no historic photos or images. Those can in some cases be found elsewhere, for example, the bridges in the Hungarian stretch are covered in more detail in the excellent book "Duna-hídjaink", which is freely available online. One of the oldest and longest bridges across the Danube, Constantine's Bridge, is an absentee (because it no longer exists), while the famous Trajan's Bridge is represented only by its remaining ruined foundation. 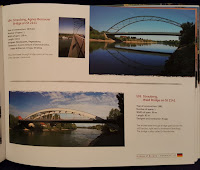 Gyukics has done well to find good vantage points to see the majority of the bridges, some of them photographed from the air or from boats on the river. The journey starts out slowly, with many pages of spans which are undistinguished although not entirely without interest. These are mostly fairly anonymous highway, rail and footway bridges in rural Germany. There are a few oddities to be found this high on the river, but what strikes me most is how much variety there is within the mundane. There are almost no two identical bridges, even where the same river crossing problem is solved again and again. Minor features of the context, and differences in approach by individual engineers, lead repeatedly to subtly different outcomes. There is plenty here for anyone who mistakenly thinks engineering is a science, rather than an art.

Although the photos focus upon the bridges, there is plenty to see in the countryside, as well as those who use the bridges. As the book proceeds, the possibilities in structural engineering steadily expand, while the scenery shifts gradually. Flip forward a few pages at a time and what is initially imperceptible becomes clearer, as the river increases in volume and comes steadily to dominate the landscape. 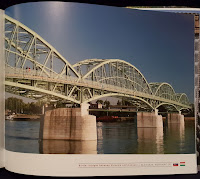 There are several bridges which are frankly dull, at least to begin with, but interspersed with cute little covered timber bridges, and more than a few interesting and unusual concrete and steel designs. Moving downstream, there is an increasing number of steel trusses, which accumulate until they become the Danube's dominant bridge form. It's tempting to try and pick out highlights, but there are so many structures that any bridge enthusiast should find something that delights or surprises. You can find thumbnail samples for most bridges at the publisher's website. Along its way, the Danube features some world-famous spans and well known designers, as well as a number of bridges which are structurally or architecturally remarkable.

There is a box girder bridge with a secret railway passing inside the box; a cable-stayed bridge with a cafe at its top; several arch bridges so thin they appear unstable; bridges with legs that look like inverted pyramids; an Austrian variation on Sergio Musmeci's thin-shell experiment in Basento; a twin-deck structure which lifts its lower deck when boats pass, like hitching up a skirt; and plenty more which are weird, wonderful and amazing. 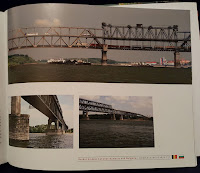 It's impossible not to begin to spot one key reason behind the variety of structures, and the explanation why there are so few older structures. Many of the bridges are described as having been damaged or destroyed in the Second World War, and having been rebuilt since. The same is noted for bridges in Serbia, many of which were affected by NATO's air strikes in 1999. In times of war, access to river crossings is key, and the history of the Danube's bridges provides a reminder that bridges often play a  key role in peaceful trade and cooperation, and hence become particularly vulnerable in times of conflict.

The text is not always well translated into English, but it's quite good enough. Knowing that "permanent height" should instead be "constant depth" and that "belt" should be "chord" will resolve most of the more peculiar captions.

Copies of the book are available directly from the publisher, priced at €20 plus postage. For the UK, that worked out for me at €35 total, which is very good value for a full colour book of this size and length, although I had to pay bank transfer fees on top of this.
Posted by The Happy Pontist at 11:16 AM

Will this book ship to the USA?

Thank you for your interest in, we send little patience. We ask for a precise postal fee. Best regards: Péter Gyukics,
Hungary, Budapest

Would like to focus:
In the middle of paragraph 12:
"…. an Austrian variation on Sergio Musmeci's thin-shell experiment in Basento; …”
Here he writes about the Erdberger Brücker. This was also built in 1971 as the Bosento river bridge, but was dismantled in 2015. Instead, a new reinforced concrete bridge has been built, which is the central element of a road node. The junction also includes two smaller new bridges. As a Hungarian headlamp I noticed and I photographed this facility for the first time. (Vienna, Danube canal) I called for the construction dr. trager Herbert engineer's attention. He has published on the construction site illustrating my photos and web imagery.
The professional magazine link:
http://fib.bme.hu/folyoirat/vb/vb2016_4.pdf. p.76-79

Many thanks Péter, that is very interesting! It's a real shame that the old bridge was demolished, it was a very unusual structure. It is good to see that the new bridges, although not so unusual, are also very attractive designs.