This is the third and last of a set of "souvenir" books I'm featuring which document recent major UK bridge projects. 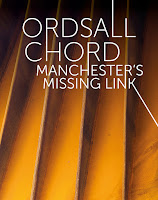 The Ordsall Chord is quite a different beast to either the Mersey Gateway or the Queensferry Crossing, with the largest bridge span a relatively modest 89m. The Chord is a new railway connection linking Manchester's Piccadilly and Victoria stations, and although there were evidently plenty of bridge works involved, the nature of this book makes clear that it was more of a multi-disciplinary project in nature. The civil engineering construction accounts for only 38 pages, with substantial chapters given over to other topics such as railway signalling, track and overhead electrification.

The Ordsall Chord - Manchester's Missing Link (Mercury Group Limited, 2018, 168pp) was written by members of the project delivery team, and this gives it quite a different slant to either of the other two books I've featured, with a strong focus not just on the project objectives or the construction efforts, but more material on how the project was procured and organised. I think this book is therefore potentially of more interest to professionals than the general public, although I'm sure there are many railway enthusiasts who'd enjoy it.

The foreword to the Mersey Gateway book is by a politician, while the Queensferry Crossing book has multiple forewords from different perspectives. The Ordsall Chord book is introduced by the lead director from the delivery organisation, who introduces a theme that runs throughout the book, "great people working collaboratively". I think it's a interesting that this needs to be highlighted - it suggests that the construction industry is often populated by not-so-great people, not working collaboratively, so that anything else is an anomaly.

The main part of the book opens with a short chapter explaining the history of the site (the project runs right across part of the historic 1830 Liverpool and Manchester Railway), and the need for the new railway line.

The heritage theme continues into a chapter exploring the project's constraints and how the design was developed. This is a better attempt at explaining design issues than in either of the other two books, crediting and naming specific individuals rather than submerging them in corporate anonymity, exploring the challenges of working amongst numerous protected heritage structures, explaining how visual sense was made from a disparate variety of structural forms, and of how the architecture and engineering work in conjunction. The focus is very much on the architecture, but that's a relief after seeing it largely ignored in the other books.

A thorough chapter discusses the Northern Hub Alliance, a contractual partnership which brought client Network Rail together with their contractors to deliver the scheme. My experience is that Alliance arrangements are unusual in UK transport infrastructure, and while I found this chapter very interesting as a professional, I can imagine some readers' eyes glazing over.

The main message I take away from the chapter on civil engineering is the difficulty of building a project of this sort in a constrained urban environment. This is reflected in the way a large number of smaller structural elements were constructed in a "piecemeal" manner, with plenty of off-site fabrication and precasting.

The text never delves into the level of detail that would satisfy a bridge engineer, and I was left with a large number of questions, while recognising that I'm not really the main audience for such a book. The word "success" is used relentlessly, but fortunately leavened with a few short acknowledgements of real problems encountered during the project, such as issues with the stressing of the network arch bridge hangers.

The remaining chapters cover the other railway disciplines and (briefly) the project's outcome and legacy. I'm no trainspotter, but I think I did learn a few new things from reading these.

It's very well-illustrated throughout, with plenty of photographs, mostly from Matt Nichol, and many of these can also be seen on his website linked below.

The book is available for £25 plus £5 postage from a dedicated website, or from Amazon.

Posted by The Happy Pontist at 9:04 PM