My reader Patrick Sparks has drawn my attention to a presentation from the FIU Bridge designer which makes an interesting read in light of the recent OSHA report.

This is the presentation given by FIGG at the FDOT office just prior to collapse. It goes into some detail about their analysis.
— Patrick Sparks (@psparks1960) June 21, 2019


The linked PDF comprises the minutes of a meeting held to receive a presentation from the bridge designer Figg at 9am on 15th March 2018, just a few hours before the bridge collapsed, plus a series of photos capturing the presentation slides*. Figg were present at a meeting along with the Florida Department of Transportation (FDOT), the contractor MCM, the university FIU and their construction representative BPA. The aim of the meeting was to review cracking which had arisen in the bridge during construction.

(*Is this a normal thing to do in US engineering meetings? It feels very odd to me.)

It is clear that despite the very severe and unexpected cracking which had occurred, nobody present considered it necessary to take any immediate action other than to proceed with re-stressing of the cracked truss diagonal.

The designer "assured that there was no concern with safety of the span suspended over the road". The client's construction adviser specifically asked if the bridge should be propped but the designer stated that it was not necessary.

The actions discussed were mostly take-aways: the construction adviser would review the designer's analysis over the next few days; the designer was working on a scheme to "capture" the cracked truss node; there was agreement that the engineering peer reviewer should take a look at the situation, but no clear action or timescale for them to actually do so.

A re-stressing procedure was due to take place within a few hours following the meeting, but the designer left site rather than stay to observe, and the client's construction representative had not received details of the procedure prior to the meeting.

Reading the notes from the meeting what strikes me is a total lack of clarity from everyone present. Some actions are implied, but none are clearly recorded. Nobody was present who could provide meaningful comment or review of what the designer had to say. Those present accepted that there was a serious and unexplained issue, but felt it appropriate to push on with re-stressing the truss end diagonal even through the cause of the cracks was completely unknown. There is no sense in the minutes of a forensic approach to the failure.

Some of this is not unexpected - I have sat in similar meetings where there is no clear leadership and the approach to solving a problem appears to be unstructured. It is, however, something for other projects to learn from.

There are inconsistencies between what the designer presented, and what the OSHA investigation reports. 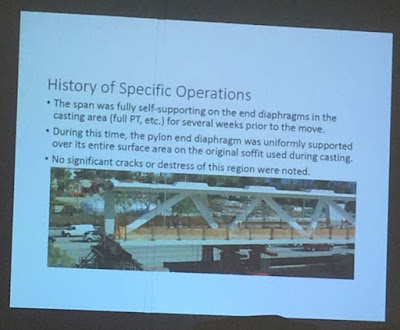 The first of these relates to the stage when the falsework supporting the concrete truss was removed, leaving it sitting on temporary supports before transport to the bridge site. The designer's presentation states there were no significant cracks at this time, but the OSHA report reveals that a cracking or popping sound was heard and several cracks were then visible in exactly the same part of the structure that led to later concern.

Much of the presentation is given over to a re-calculation of vertical transverse bending in the end diaphragms of the bridge. It isn't clear why, as the visible cracks were not characteristic of vertical bending.

A key part of the designer's re-analysis starts on page 27 of the PDF, headed "Total Nodal Shear Stability". This is their check of whether the truss end node can fail by punching out of the end diaphragm. Differences to the OSHA analysis are readily apparent: OSHA calculated shear on a horizontal plane in line with a casting joint, while the designer considered shear on two vertical planes through the diaphragm either side of the node. 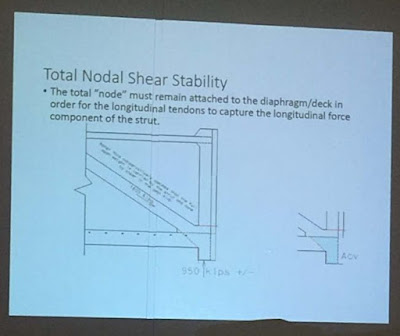 OSHA's calculations show the horizontal plane to have had insufficient strength: the concrete area was relatively small, the construction joint was a plane of weakness, the area of reinforcing bar passing through the plane appears to have been small. The designer's calculations showed the vertical plane(s) to be ok: the concrete area was relatively large and doubled (two shear planes either side of the truss diagonal), the area of reinforcement was large, and transverse prestress provided a "clamping" force which enhanced shear strength.

The discrepancy indicates that the designer did not re-calculate shear on the horizontal plane, which was later found to form part of the observed failure mechanism. Both shear planes should have been checked (and any others which might be identified as being potentially weaker).

The designer considered in detail the changes in support of the truss from the initial temporary supports to the permanent supports, with a different shim arrangement, and concluded that it was unclear how this change could possibly create the cracks that were observed. The cracks were described by the designer as "spalls", seemingly not recognising that the end node was in fact in the process of gradually moving and becoming detached from the body of concrete.

The designer's conclusion was as follows: 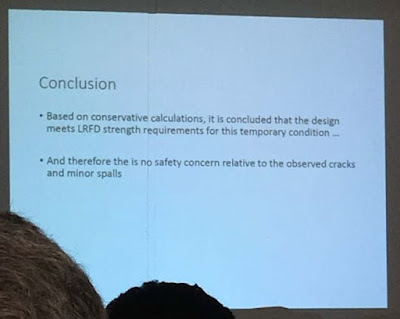 In hindsight, this sounds obviously faulty reasoning, but we should be wary of hindsight bias. With the evidence clearly laid out before us, the significance of the cracks may now seem obvious. However, with the cracks unexplained, the designer was using their familiar tools to try and understand what had happened. Although OSHA has been quick to blame everybody involved in the project for their alleged failures, I think there will be many designers who will wonder whether they would have done any different.

Another cognitive bias may have applied back in March 2018. Here's what Wikipedia has to say about confirmation bias:


Confirmation biases contribute to overconfidence in personal beliefs and can maintain or strengthen beliefs in the face of contrary evidence.

Is this what happened? Were project participants willing to ignore the evidence of progressive failure because it simply did not fit in with their mental model of how the structure should behave? The designer is likely to have had considerable experience of computer modelling, and of structures that behave in a manner that doesn't contradict it. It's easy in that situation to think that the computer modelling is right (in fact, errors and omissions may be made in computer modelling from time to time, but usually structures behave well enough for this not to become evident).

Groupthink may also have had an influence on the outcome. Here is Wikipedia again:

The minutes of the project meeting show that the designer's viewpoint was challenged, but it seems that challenge wasn't pursued with sufficient firmness - the designer's recommendations (to re-stress the truss diagonal, and not to prop the structure) were followed without giving time for alternative views to inform these decisions. The minutes are unclear who was responsible for the decision anyway: the word "safety" appears only once in the minutes, and it is not clear from the record who took the lead responsibility for safety of the actions taken.

Everyone is vulnerable to confirmation bias, groupthink and similar irrational judgements. The evidence is that cognitive biases in general have a big impact on how individuals and groups operate in many widely varying contexts. Recognition of this has driven the entire field of behavioural economics, but it's not something you hear much about in the engineering context.

I hope that the official incident investigation digs into some of these issues, as I think they are in many ways of wider relevance than issues of calculations and concrete strength, the specifics of which will always vary from project to project. It would be foolish for designers of steel bridges to think that the FIU bridge incident is not relevant to them, for example. The factors (including, often, commercial pressures) which lead to poor analysis of evidence and hence poor decision-making cut across all types of project and many types of error.

I feel the issue of identifying effective behaviours and putting in place processes and a culture which encourage rather than discourage them is the key area where attention should be focused.
Posted by The Happy Pontist at 7:46 PM