"The Queensferry Crossing - Vision to Reality" by David Watt

This the second of three "souvenir" books about recent major bridges in the UK that I'm going to feature here. 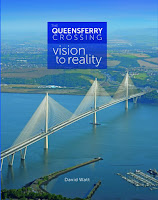 The Queensferry Crossing - Vision to Reality (Lily Publications, 224 pp, 2017) is a hefty, coffee-table tome, documenting Scotland's latest big bridge in exquisite detail. Grab the hardback if you get the chance, but the reprint softback is good value at £18.95 (both editions can currently be found on amazon.co.uk at reduced prices).

The author, David Watt, was for six years the Communications Manager for Forth Crossing Bridge Constructors, and brings to the book a combination of thoroughness and clarity. Compared to the Mersey Gateway book that I discussed last time, this is a much more in-depth document, diving much further into the detail of how the project was delivered.

As with the Mersey Gateway, the Queensferry Crossing is a three-tower cable-stayed bridge, but at a significantly larger scale, with a longest span of 650m compared to 300m. The towers at Queensferry are some 207m tall, and the bridge deck sits much higher above much deeper water. The scale and location mean that several aspects of design and construction were very difficult.

A key design challenge for a multi-span cable-stay bridge is how to provide adequate stiffness, as only a limited number of cables are effectively anchored to the ground through end piers or abutments. The Mersey Gateway relies on the stiffness of the bridge deck to reduce demand on the towers, while the Queensferry Crossing adopts a more innovative solution, with crossover of cables at midspan providing the necessary rigidity. Queensferry is not unique (see for example the Viaduc sur la Rocade Sud in Rennes, France), but I think it pioneered this solution at such a large scale.

The Mersey Gateway was constructed with the help of a temporary access bridge, but this was not feasible for its Scottish cousin. Accordingly, one of the bridge's biggest challenges was logistical: where to fabricate and assemble the components, and access to the mast positions via boat. Many of the components were produced overseas (in Poland and in China, for example), and fortunately the project benefited from the proximity to the bridge of Rosyth Docks, a large area of which was taken over by the contractor and used as a storage, assembly, and casting yard.

The book is split into nine chapters, topped and tailed with discussion of the need for a bridge, project development and procurement, and sections on community engagement, environmental issues, and the bridge opening celebrations. There's a lengthy credits list for firms involved in the project, but I did find it extremely odd that the book nowhere mentions the bridge's architect, Dissing + Weitling, who seem to have been largely written out of the project's history.

The core of the book covers the bridge's design and construction, although the challenges of writing about design are apparent in that it gets only 10 pages while construction gets 118 pages. Every section of the book is well illustrated, often with spectacular photographs, and the construction section also has plenty of detail - even down to an image of the cable strand wedges!

As a record of the project, it's fantastic, but after a while the level of detail does get a little numbing, and I can't admit to having absorbed it all.

The book goes out of its way to recognise some of the many people involved in the project, with lots of images of members of the project team, and interviews with five of them.

Posted by The Happy Pontist at 8:28 PM