"The Mersey Gateway - A Bridge To Prosperity"

It's not unusual for major bridge projects to mark their completion with a souvenir booklet of some kind. I've recently got hold of three examples where they have gone a bit further and an entire book has been published to celebrate the occasion. 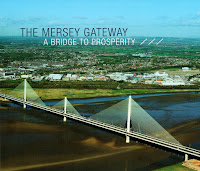 The first of the three is Mersey Gateway – A Bridge to Prosperity (118pp, 2018), published by the project's client and bridge owner Halton Borough Council. The Mersey Gateway connects the towns of Runcorn and Widnes across the River Mersey and Manchester Ship Canal, providing a new route for highway traffic, bypassing the Silver Jubilee Bridge built in 1961.

The new river crossing is a three-tower cable-stayed bridge with an unusual configuration, having a central tower visibly shorter than the two other towers. The new structure has been built to provide improved traffic capacity, reduce reliance on ageing infrastructure, and improve travel times not just locally but for nearby areas, particularly Liverpool and its surroundings. 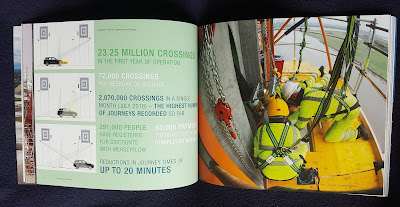 The book concentrates on the client's view of the scheme. There is very little information on the engineering or architectural design of the bridge, not even an explanation for why the central tower is shorter, to give just one example. However, the book makes up for this with its strong coverage of the bridge's economic and social benefits.

The structure of the book is not chronological, but instead sets out to grab attention from the start. A description of the project's history and development doesn't start until page 77. Instead, the first chapter documents key features of the construction phase: the temporary trestle bridge, foundation cofferdams, the moveable scaffold systems (MSS), deck construction, cable stays, traffic management, and the opening ceremony. It's a well-chosen selection of highlights from the project's construction timeline.

There are short interviews with two people involved in the project: tower crane operator Peter McDonough and visitor centre volunteer Evelyn Edwards. I'd like to have read more of these, as my own experience of major projects is that a huge number of people contribute, and they often have plenty to say. 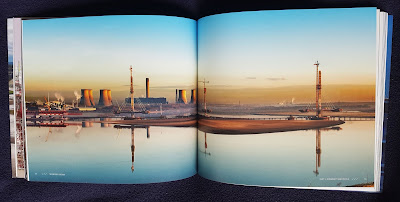 The second chapter emphasises community and people, including education outreach, local training and apprenticeships, recognition of women in engineering, community volunteers, and also the work of the Mersey Gateway Environmental Trust. This really shows what matters to the project client on a project such as this: it's not just all about quantities of steel or traffic statistics.

The third section, on design, environmental assessment and other aspects of the development phase, is weak by comparison – perhaps it's because I'm a designer by trade, but I feel this was a lost opportunity to tell this part of the story. It reads pretty much as if nobody involved in producing the book had actually spoken to anyone involved in design. The weakness continues into the fourth and final section, which attempts to credit the main project participants but which I think will leave most readers little wiser about what some of those involved actually did.

This reflects the nature of the book as the celebratory record of a very substantial achievement: Halton is a small local authority now responsible for two of the UK's largest bridges – they are right to be proud and to emphasise the benefits of the scheme beyond the bridge as a structure. This also means that the book (like most souvenir publications) has a uniformly optimistic, positive narrative – if anything went wrong along the way, if difficult challenges were overcome, those stories are absent. 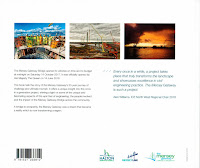 The bridge's graphic layout is excellent, and there is a wide range of excellent photographs of the bridge and its construction (taken by David Hunter, and some of them reproduced here). The author or authors are uncredited, but the writing is very clear, and particularly good at explaining engineering and construction issues in lay terms – much better at this than I would normally expect.

It isn't the easiest book to get hold of – I wasn't able to locate anyone selling it online, and I got my copy by contacting Curiosity Bookshop in Runcorn directly – if they still have it in stock, they can take an order over the phone and post the book out (it costs £9.99 plus postage).

Posted by The Happy Pontist at 3:14 PM