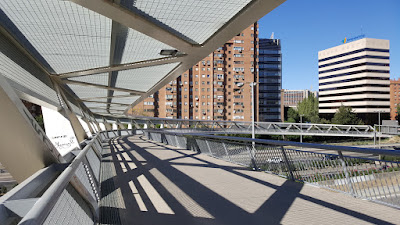 In October, I joined a trip to Madrid to see various interesting engineering structures. I've picked three of the footbridges to feature here.

The first is the Paloma Footbridge, a remarkable structure which carries pedestrians across a busy urban motorway. The 191m long bridge was designed by Cesma Ingenieros, with construction engineering by Ines Ingenieros. It was completed in October 2010 at a reported cost of only €2m.

The bridge is fascinating from a structural engineering viewpoint, but what is most immediate about it is its sense of drama. Its four spans sweep through a 90° curve to address a huge change in ground level, rising 8m in order to clear the motorway. The form is highly unusual, a group of two horizontal trusses and one inclined truss arranged in a 4m tall "C" cross-section.

It takes some time to understand quite how the structure works.

The bridge spans are supported on giant "Y" shaped columns, the upper arms of which also form part of the main load-bearing truss. This truss is then subject to a series of lateral forces which are resisted through the roof and floor trusses.

The lateral forces arise from three types of structural behaviour.

Secondly, the loads are eccentric to the shear centre of the overall cross-section. For any channel-shaped section, the shear centre is outside the area enclosed by the section, on the outside of the vertical element. All loads therefore establish a further torsion acting towards the inside of the piers.

Finally, there are compression and tension forces in the horizontally-curved upper and lower chords of the main truss. These introduce lateral destabilising forces, the magnitude and direction varying according to the position along the main truss. The two horizontal trusses provide lateral stiffening to the main truss chords, and carry the out-of-balance forces back to the support piers.

The bridge is structurally ambitious but each element also fulfils an architectural purpose, with sun-shade elements on the (south-facing) main truss and also on the roof truss. These are very welcome on such an exposed site in central Spain.

The detailing of the bridge is, for the most part, excellent, and I especially like the way the Y-shaped columns are combined with, but stand out from, the main truss.

I also noted that some of the screening in the side of the structure has an enhanced density in one area, where the bridge overlooks some apartments, enhancing privacy. This has been cleverly done, so that very few bridge users will even notice it's there.

Design of the support piers cannot have been straightforward, as they need to be strong enough to resist the complex loads applied to them (I'm not sure whether they are also designed for highway impact loads), but also flexible enough not to experience undue stress when the bridge experiences thermal expansion and contraction.

There is one feature of the bridge design that I certainly can't commend. The sun screens are a welcome feature, but with an unintended side effect, which can be seen in the first video below.


There's a pronounced light flicker which can be clearly seen as you traverse the bridge. It's caused by the orientation and spacing of the screen slats, as can be seen in this second video.


If the slats were oriented the other way, or were angled or spaced differently, the flicker would be reduced or eliminated (although obviously it will vary anyway according to the direction and elevation of the sun).

I think most bridge users will hardly notice, but I can easily see it being a significant issue for people with photosensitive epilepsy, or visually dependent vertigo. As a bridge designer, it's yet another thing to add to my list of things to consider for accessible design. Many designers seem to think that just providing a shallow gradient is enough to accommodate disabled or less able bridge users, but of course disability takes many different forms.

Another aspect which detracts from the general high quality of the bridge is the parapets, which have over-sized handrails (again, not good from an accessibility point of view), and inadequate detailing at the expansion joints. As you can see in the photo, there appears to be some kind of painted duct tape over the sleeved top rail, and an intermediate element has been damaged due to poor alignment.

On the whole, however, the Paloma Footbridge is a bold, carefully considered design. Trussed footbridges are often the least-cost, most mundane solution to crossing a motorway, but nothing could be further from the truth in this case.

Further information:
Posted by The Happy Pontist at 11:05 PM