This was the final bridge I visited on my September trip to Vancouver. The Port Mann Bridge was completed in 2012 as a 10-lane replacement for a steel arch highway bridge spanning the Fraser River. It is the centrepiece of a much longer highway improvement project. 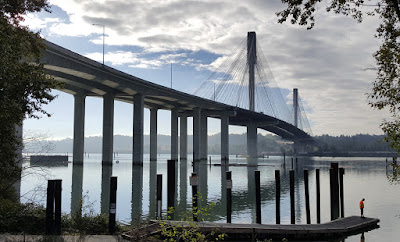 With a 470m main span it is reportedly the second longest cable-stayed bridge span in North America (behind Mexico's Baluarte Bridge), but it doesn't even dent the top 50 worldwide. It was also briefly the world's widest long-span bridge (67m wide), before being overtaken by the San Francisco Oakland Bay Bridge (79m wide) in 2013.

I can't confess to being a great admirer of the new cable-stayed bridge span.

The choice of single pylons sitting in between twin deck sections seems at first sight to be aesthetically wise (cf. Stonecutters Bridge, Millau Viaduct, Queensferry Crossing). However, due to the bridge's tremendous width, four planes of cable stays are required, leading to quite a dense, confused appearance.

This also directly leads to the over-sized upper pylon sections, which are as large as they are solely to have enough space to accommodate the huge number of cable anchorages. Nonetheless, it is reported that this arrangement is less expensive than the alternative A-frame, H-portal or multiple mast pylons, and cost was the primary driver for the whole project.

Cable-stayed bridges often suffer from an imbalance between tower profile above and below deck, as out-of-balance longitudinal thrusts in the deck are restrained at the towers. The Port Mann Bridge has avoided that particular peril, with well-proportioned lower tower sections. T-shaped crossheads support not only the deck, but also anchor stability cables for the upper towers.

The span arrangement appears odd, but is rational. The south pylon sits well on land, while the north is in the middle of the river. The cause for this is the spacing of various obstacles: a railway yard requiring a significant span at the south end; a requirement for the adjacent tower to be on dry land to prevent any risk of scour to the riverbank protecting the same railway yard; and the position of the main and secondary navigational channels in the river.

The bridge is well known for the troubles it developed shortly after opening, with ice forming on the main cables and falling as "ice bombs" onto terrified car drivers below. This has since been treated with a mixture of hydrophobic coatings and ice-removal collars which can be slipped up and down the cables. I'm only guessing, but perhaps the controversy explains why the main bridge designer TY Lin doesn't feature the bridge on their website project gallery.

My main interest in sharing this bridge, however, is not for the main span but for the northern approach viaduct. I believe this was designed by Californian firm IBT (now part of Systra), and it's a classic post-tensioned box girder viaduct, a form in which IBT have considerable expertise. IBT are certainly happy to have the project on their website.

The arrangement is highly economical and also very beautiful. Three prestressed box girders sit on simple rectangular concrete piers. The girders are trapezoidal in cross-section, with the bottom face lightly arched. The bottom face therefore varies in width, adding interest to what is otherwise very plain.

It doesn't seem in any way unusual, but I think the detailing is excellent, with only a few lighting column and sign supports appearing as an afterthought. The concrete construction is also of excellent quality, and it's a tribute to how attractive a simple and economical engineer-led solution can be when it's delivered with such splendid clarity. 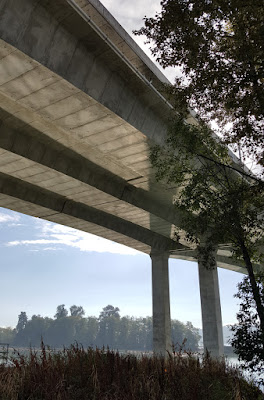 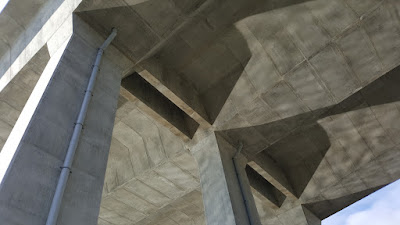 Posted by The Happy Pontist at 9:46 PM

You will have to go back to Vancouver and see the winners that you didn't have time for this trip. For instance, Golden Ears, Pitt River, Coast Meridian overpass, Skybridge, Pattullo Bridge and North Arm Bridge.

While the northern approach viaduct has the maassive superstructure, the piers looks very slender. Could it resist seismic loads? The designer might have thought seriously about that, and carried out special analysis to ensure it is strong enough. The design looks great