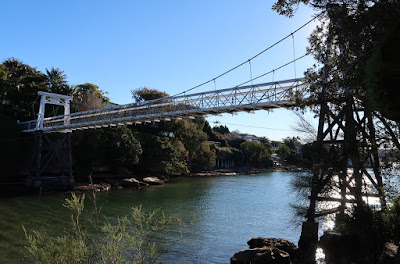 This charming suspension footbridge is tucked away in a quiet eastern Sydney suburb, little known to most of the city's residents let alone anyone else.

According to a history published online by the local municipal council, plans for a bridge across the beautiful Parsley Bay were first discussed in 1906, with the structure in place by 1910.

The bridge was designed by local town clerk and engineer Edwin Sautelle, and cost the tidy sum of £500 to build. Reportedly, it was built to improve access to ferries via the nearby Point Seymour.

The bridge is predominantly a timber structure, with the towers, deck and parapet rails all timber. The other parapet elements are in metalwork.

The towers are A-frame in form, which provides good stability in the longitudinal direction, but the bridge is evidently less stable laterally. Tie-back cables have been installed on all four corners, presumably to reduce lateral sway. 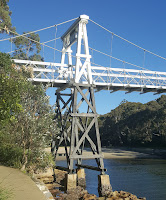 The bridge appears to have changed very little over its lifetime, judging from old photographs, although an image in Pictorial History Eastern Suburbs indicates that lamps or ornaments once sat above the bridge pylons. The same image doesn't appear to show the tie-back cables, although these can be seen in a postcard from circa 1930.

The other main change over time appears to have been the steady growth of surrounding vegetation.

The bridge was repainted and repaired in September 2003, and a further refurbishment was completed by GPM Constructions within the last couple of years.

The bridge's main asset is its beautiful setting. The Parsley Bay reserve features a fine sandy beach with water protected by shark netting, as well as a small patch of rainforest towards its rear. Views from the beach and from the bridge are both very attractive.

It seems to be a popular spot for bridge-jumping, although signs on the bridge make clear this is prohibited. 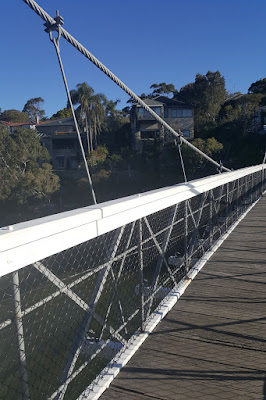 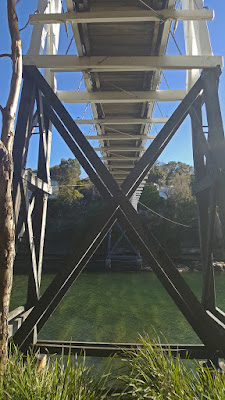 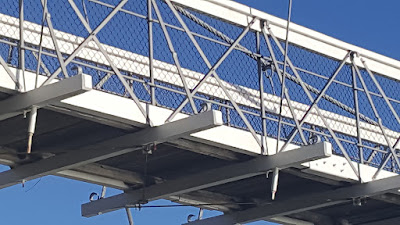 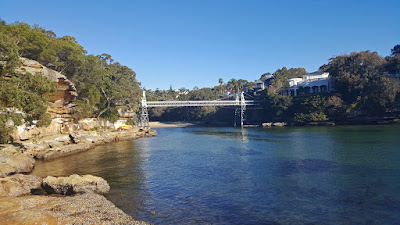 Posted by The Happy Pontist at 8:54 PM