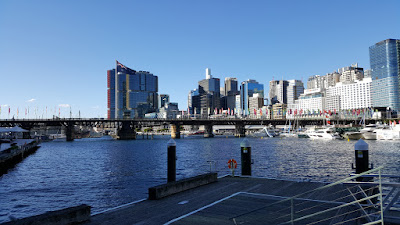 My next few posts will cover a handful of bridges in Australia.

The best known bridge in Sydney is clearly the Harbour Bridge, but it's not the only historic engineering landmark in the city.

The Pyrmont Bridge is designated a National Engineering Landmark by the Institution of Engineers of Australia. It is a bridge rich in history and technical interest, and I can only scratch the surface here. I'd particularly recommend the original paper on the bridge in the ICE Proceedings (1907) and a series of articles in The Engineer (1917), the latter of which include excruciating detail in the form of description, drawings and photographs. There is an excellent history of the bridge in the document proposing the bridge as an engineering landmark, all links can be found at the end of this blog post.

A timber toll bridge crossed the Darling Harbour, dating from 1858, operating at a lower level than the present structure and incorporating a swing span. The replacement bridge was completed in 1902 to a design by Percy Allan, and was built at a higher level. Allan designed the bridge for the local public works department after a design competition had been held and all 41 entries had been rejected.

It was built as a highway bridge, being closed to highway traffic in 1981 following the construction of new highway viaducts nearby. The bridge was partially refurbished in the 1980s, reopening as a pedestrian boulevard in 1988. The bridge carried the Sydney Monorail from 1988 to 2013. The paper by Trueman linked below describes the refurbishment work.

The bridge is generous in proportion, originally accommodating a 40-foot wide carriageway and two 7-foot wide footways. The two central spans comprise cantilevering steel truss girders supported via an array of roller bearings on a central caisson pier. The steel was supplied from Belgium, with Australia lacking any significant steel industry at the time. However, all the approach spans are built as a variant on Howe trusses using Australian ironbark timber, primarily to save on construction cost, with the total price being roughly half what an all-steel bridge would have cost. 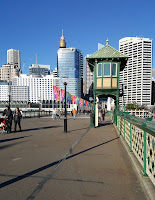 When built, the bridge was immediately recognised for its engineering significance. The opening spans were larger in area than the vast majority of moveable bridges built previously, and it was thought to be a pioneer in the use of electric power for its operation. The bridge is operated from a single control cabin at the centre of the opening section, with power supplied by cables running below the harbour bed. The cabin appears largely unaltered, although it was relocated to the edge of the bridge when the monorail was added.

The main perception at deck level is of generosity of space. It's unlikely a pedestrian promenade this wide would ever be built as new, it's purely a legacy of the bridge's historic use as a road bridge. Now there is space for banners, for people to admire the views of the harbour to either side, and for walkers, cyclists and roller-skaters to coexist reasonably happily.

Seen from below, the bridge appears in good condition, although I understand it is subject to an ongoing maintenance programme (BIM-empowered). When it was converted for pedestrian use, an extensive study into its defects and repair requirements was made. The engineers proposed the use of preservative treatment for the timber, but this was not immediately undertaken due to cost. The bridge was reassessed and only those repairs strictly necessary for safety reasons were completed: other damaged timber was left to continue to deteriorate. During a subsequent ten-year maintenance programme, timber preservatives were installed, both diffused into the timber core and applied as a barrier to the timber surface.

The timber trusses appear to have been overpainted at some stage, a largely cosmetic treatment for such a structure, I would think. The various connections are clearly visible. I believe some of these were altered during the 1980s restoration in order to locate connecting bolts in less damaged parts of the timber.

The west end of the bridge appears largely unaltered, with impressive stone approach structure. The east end has been more significantly altered, presumably because the bridge was cut short when the Western Distributor Highway was built. There are now escalators down to quayside level, and a cable-stayed footbridge provides a higher-level extension for those wishing to continue over the highway.

Overall, it's great to see that a bridge which was originally built as a cut-price alternative to other designs has survived so well, and I don't think engineers at the time of construction would have expected it to last so well. It has survived a variety of major changes in use, and its continued value as a key link in the Darling Harbour surrounds should hopefully ensure it survives for a long time to come. 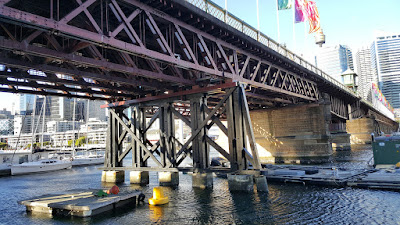 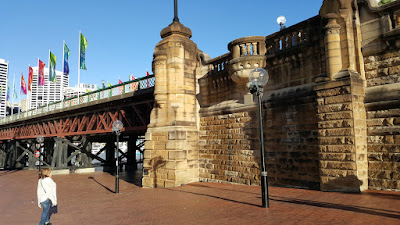 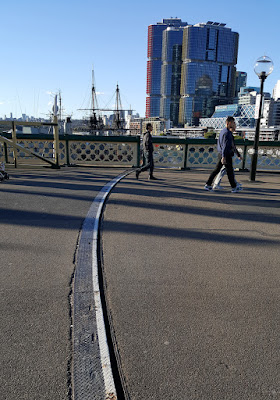 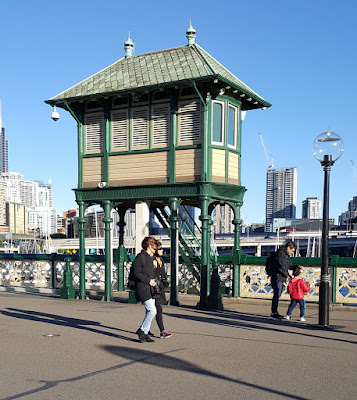 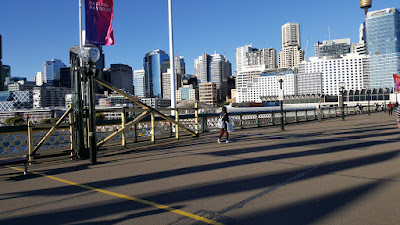 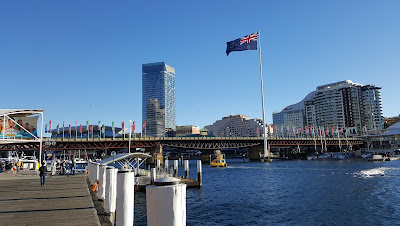 Posted by The Happy Pontist at 8:46 PM

Dear HP,
I also wrote several blogs about Sydney (and Brisbane) bridges.
The first posting on the Pyrmont Bridge is at: http://www.bridgeofweek.com/2011/03/australia-bridges-pyrmont-bridge-in_24.html
Mark Y