While visiting the Rotherhithe Tunnel footbridge, I spotted this span through a gap between some buildings, and decided to take a closer look. 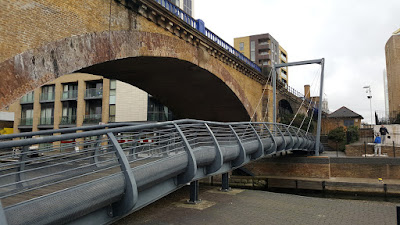 I don't know who designed or built this bridge, or when, and indeed that's probably for the best.

The bridge spans the canal right next to Limehouse Basin, just below the Commercial Road Locks. It provides a key link in the footway around the canal basin (now part of the Jubilee Greenway), spanning Regent's Canal.

It's a steel cable-stayed bridge, with a portal frame tower supporting the deck via an asymmetric fan-type cable layout. There are three pairs of main span cables, and one pair of back-stay cables. The bridge deck consists of steel edge girders supporting curved steel parapets and a timber plank deck.

At first sight, it's a slightly clunky but unobjectionable bridge, noticeable mainly for being awkward in height relative to the adjacent railway viaduct. There are two landings on the span which would have been better eliminated as they put ungainly kinks into the otherwise smoothly curving alignment of the main bridge steelwork.

Approaching more closely, two other features stood out for me.

The first is that the support arrangements are odd, with the deck bolted directly to steel supports at both the pylon and at the "tip" of the cable-stayed deck. With an asymmetric cable-stayed bridge, the normal arrangement is to fix the span at the position of the back-stays, and have an expansion joint and sliding bearings at the tip, so that the deck is loaded only in compression, and thermal expansion and contraction is catered for.

The second thing of note is that not only are all the support cables pretty slack, one has a pronounced kink in it, showing that it has failed inside a turnbuckle connection. Slack cables are not unusual on poorly designed short-span cable-stayed footbridges: it's often difficult to get sufficient weight in the bridge deck to ensure that all the cables remain tight. But it's unusual to find that none of the cables are tight, as this indicates that the entire deck is gaining no support from the cables.

On closer inspection, I spotted a half-joint in the main deck girders towards the tip end of the deck. This explained the fixed support at this end of the bridge, as any movement can take place in the half-joint instead. However, I was completely unprepared to then find a second half-joint on the other end of the span, closer to the mast, between the first and second pairs of stay cables.

This is a truly bizarre design. If the bridge deck has a genuine half-joint at both ends, then it presumably cannot transmit axial loads in either direction. However, a cable stayed bridge cannot function without axial loads in the deck, as these are necessary to balance the horizontal component of forces in the inclined cables.

The conclusion is therefore simple: none of the cables are in fact carrying any load from the deck, nor are they designed to do so. This accounts for their slackness. All four pairs of cables, and their supporting mast, are structurally redundant, just an affectation.

One positive thing about the slack cables is that this allows them to be threaded through the parapet railings in order to be connected directly to the deck stringers. Truly, this has to be one of the oddest arrangements I've seen on a bridge like this.

This is not the first time I've encountered "fake" cable-stay bridges (see, for example, this bridge in Salford). However, it is probably the most gratuitously stupid example that I've seen. There is, I think, sometimes a place for deceit in structural design – sometimes it may be necessary to give the visual impression of something rather than the reality because otherwise a structure may simply look wrong.

Here however, there is already a fine Victorian railway viaduct that can be admired – there was never any need for a short-span footbridge to try and compete for attention in this deeply ridiculous manner. 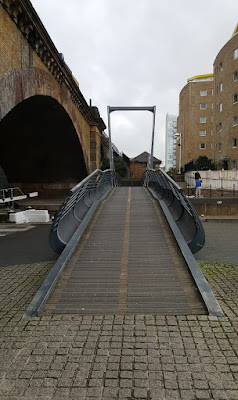 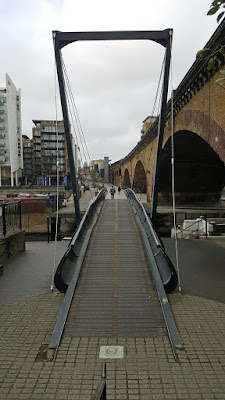 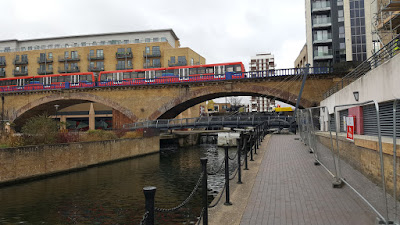 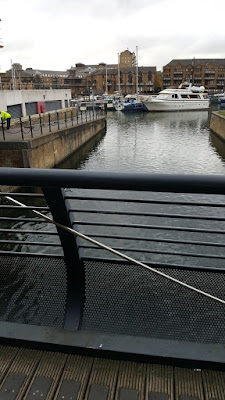 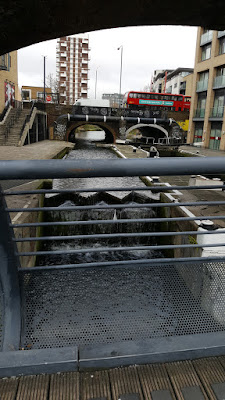 Posted by The Happy Pontist at 7:36 PM

How about some nice faux arches??