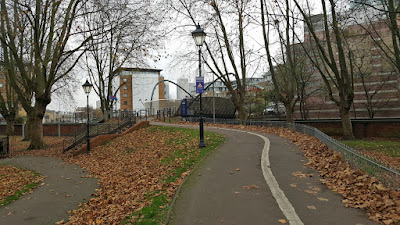 This bridge has been in place since long before I started writing this blog, so it's perhaps a surprise that I've managed to cover 41 other bridges in London before finally getting round to this one.

This footbridge spans across the northern approach road to Rotherhithe Tunnel in east London, providing a direct route from St James Gardens at its north end to various streets and housing at its south end. The south end spills onto a piazza behind the horrible post-modern ventilation building which sits over the west portal of another tunnel, the Limehouse Link, completed in 1993.

The bridge connection is useful but not vital. There’s an alternative route a short distance to the east, but that involves crossing the Rotherhith Tunnel roadway at grade, so the bridge is a welcome alternative.

The footbridge was built for £550,000 in 1998, to a design by Nicholas Lacey and Partners with Whitby Bird and Engineers and WS Atkins. It was reportedly nicknamed the "butterfly bridge" at the time. Obviously something was in the air as a similar twin inclined arch bridge also nicknamed the "butterfly bridge" was built in Bedford the year before, with a different design team.

Whitby Bird and Lacey also collaborated on the St Saviour's Dock swing bridge around the same time, and there are definitely some similarities.

The Rotherhithe span comprises two tubular steel arches from which a steel bridge deck is suspended by stainless steel cables. Each arch rib has twin sets of cables, arranged to form a triangular arrangement when viewed along the axis of the bridge. This has two benefits: by doubling the number of cables, each cable can be smaller in size, which may be considered by some to be visually preferable; and in addition, the angle of the cables ensures that the arch rib is stable against out-of-plane buckling, allowing the arch to be more slender. Nonetheless, it's not an arrangement normally seen on bridges of this type. For a relatively small span such as this, it's unlikely that the arch will be greatly reduced in size, and the effect of having more cables can be visually confusing, counteracting any benefit from their slenderness.

The bridge deck itself consists of stiff frames spanning transversely between the points of cable attachment and carrying the main loads from the bridge deck. These frames project laterally beyond the area of the deck, because of the triangulated cable arrangement. The deck is then stiffened longitudinally by means of a cable truss, additional cables running below the deck connecting the lateral frames. The frames themselves incorporate steel tie bars as their lower element, a pointlessly expensive indulgence.

It's difficult not to conclude that the longitudinal cable below the deck provides little or no structural benefit, and that the profusion of wires and metal is more confusing than elegant. This proliferation of metalwork is the point of similarity with the St Saviour's Dock footbridge, and it seems regrettable now.

Other than the structure, the most notable feature of the bridge is the chainmail barrier on each side, which is there to stop objects being blown, knocked or dropped onto traffic below. Considering their size, these are reasonably unobtrusive. My photos make them look more transparent than they feel when seen in real life, at least when standing on the bridge.

Generally, the bridge seems to be in good condition, although the paving slabs are coming loose and one section of handrail has gone missing.

Overall, this is an interesting, but flawed, little bridge. I have the feeling it is not very well known at all, and would be interested to see how many readers were already familiar with it. 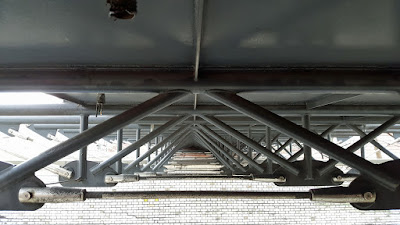 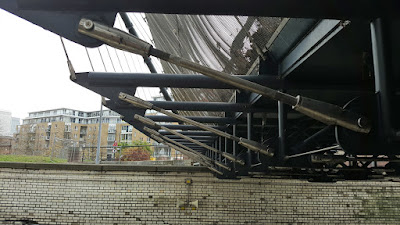 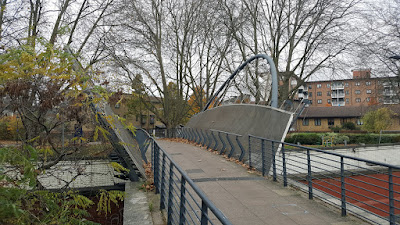 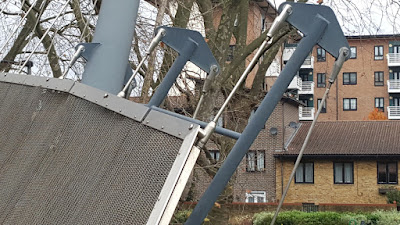