As I reached the end of my walk down Klara Sjö in Stockholm, heading towards the junction between this waterway and the larger Riddarfjärden, this was not the bridge I was expecting.

There has been a bridge here connecting mainland Stockholm to the island of Kungsholmen since 1672. At that time, less of the city had been built out into the water, and the bridge was apparently a 500m long pontoon bridge, called the Nya Kungsholmsbron. As the waterway was narrowed, the bridge was rebuilt on several occasions, including as a steel swing bridge in 1868.

That was replaced around 1919 with the present structure, which consists of a stone-clad concrete causeway punctured by shallow flood relief culverts, with a twin leaf bascule span. The bascules were fixed in place in 1949. In 2012, the bridge deck was completely replaced by a new single span structure fabricated in Poland.

Before reaching the Stadshusbron, I'd passed under the tall viaduct Barnhusbron, plus three other spans, each of which was significantly larger than the Stadshusbron, which resembles more of a barrier than a bridge. However, the adjoining ground levels here are lower than those I had passed, and the bridge is situated immediately adjacent to Stockholm's City Hall, the Stadshuset. Constructing a higher level bridge would have been inappropriate next to such an architecturally prominent building, and there was presumably little reason to provide a larger span opening.

It's interesting how this choice completely changes your perception of the area. It makes Klara Sjö feel like a broad canal ending in a cul de sac. It's a useful reminder that bridges should sometimes be distinguished only by their modesty. 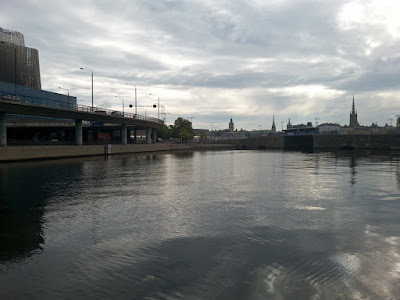 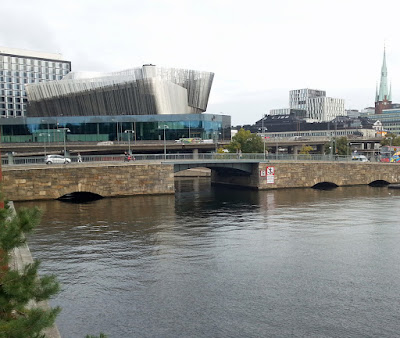 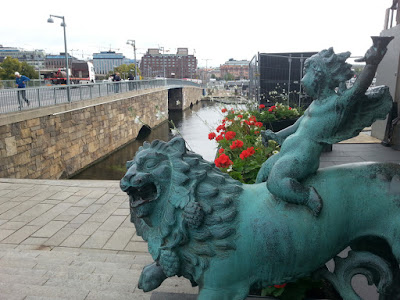 Posted by The Happy Pontist at 8:30 PM