I recently visited a handful of bridges built in or near the London Olympic Park. I've covered the park's central bridge last time, and will cover the remainder over the next few posts. 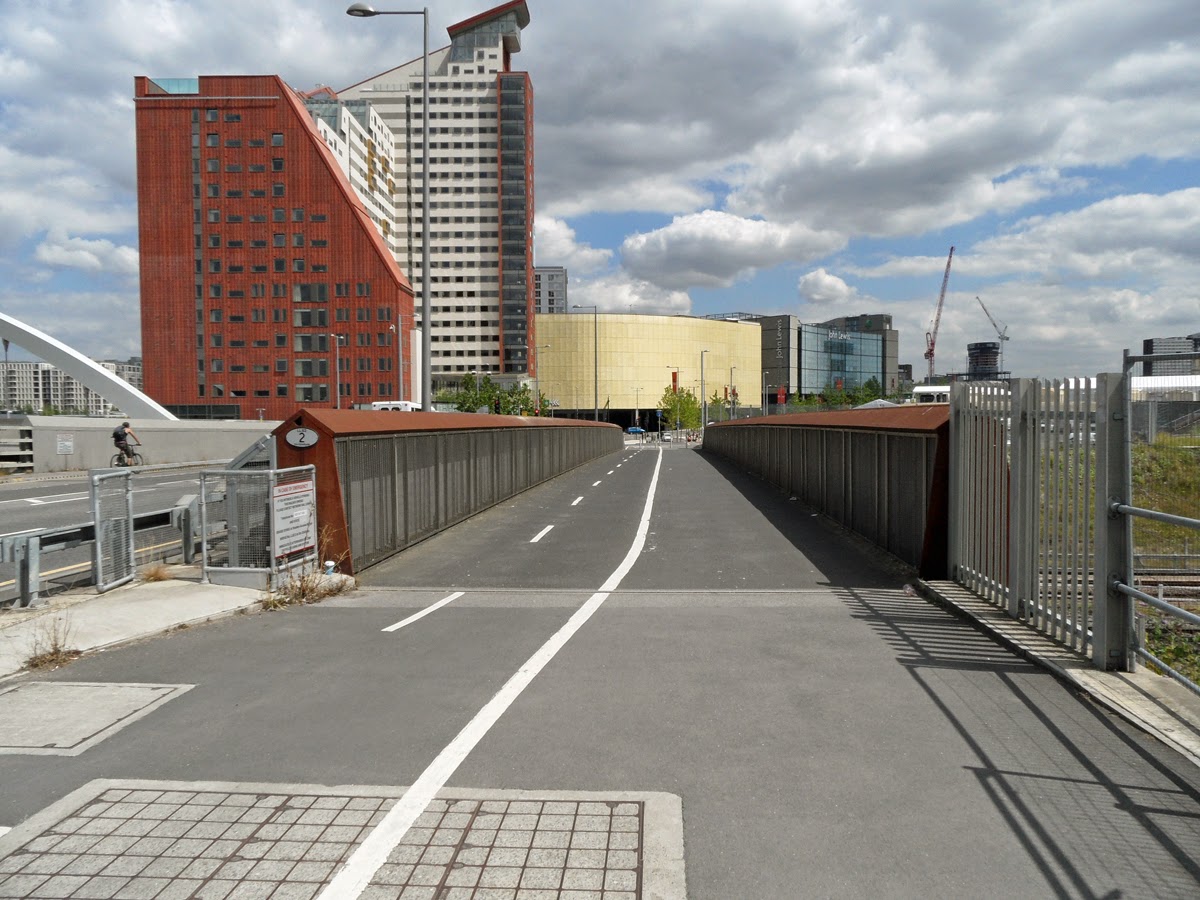 I thought I would be able to say little about Bridge 14, as for such an architecturally interesting bridge, it is almost invisible. It is a pedestrian and cycle bridge which sits alongside a highway bridge and spans over a railway line. 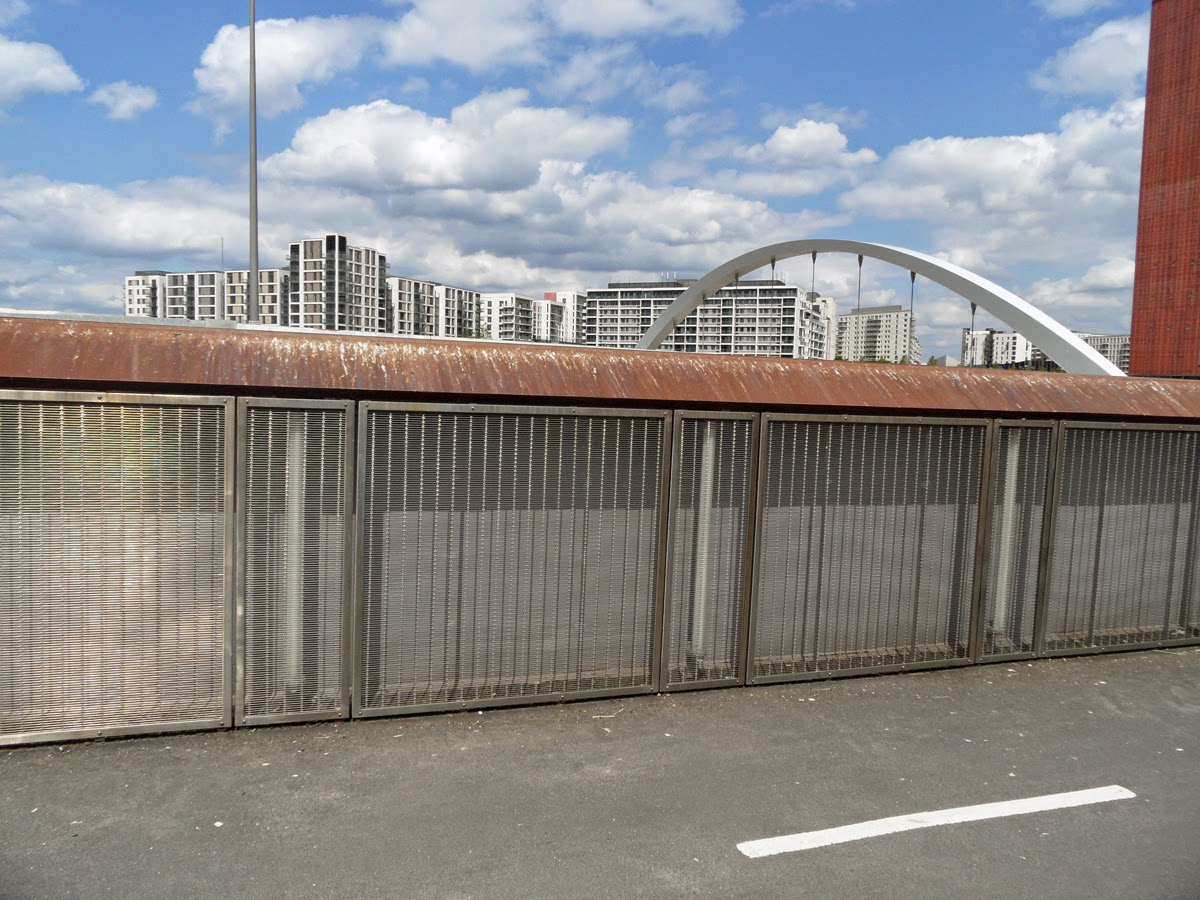 The facts are fairly straightforward: it's 57m long, 6.7m wide, and weighs 203 tonnes. It was designed by Arup and Knight Architects, and built by Morgan Sindall (the contractor only credits their own designer Benaim, and neglects entirely to mention the architect on their website, which is rather poor form).

The weathering steel footbridge girders are 1.8m tall, and double as the parapets. The height, and the solidity of the parapet, are standard requirements of Network Rail for an electrified railway line. 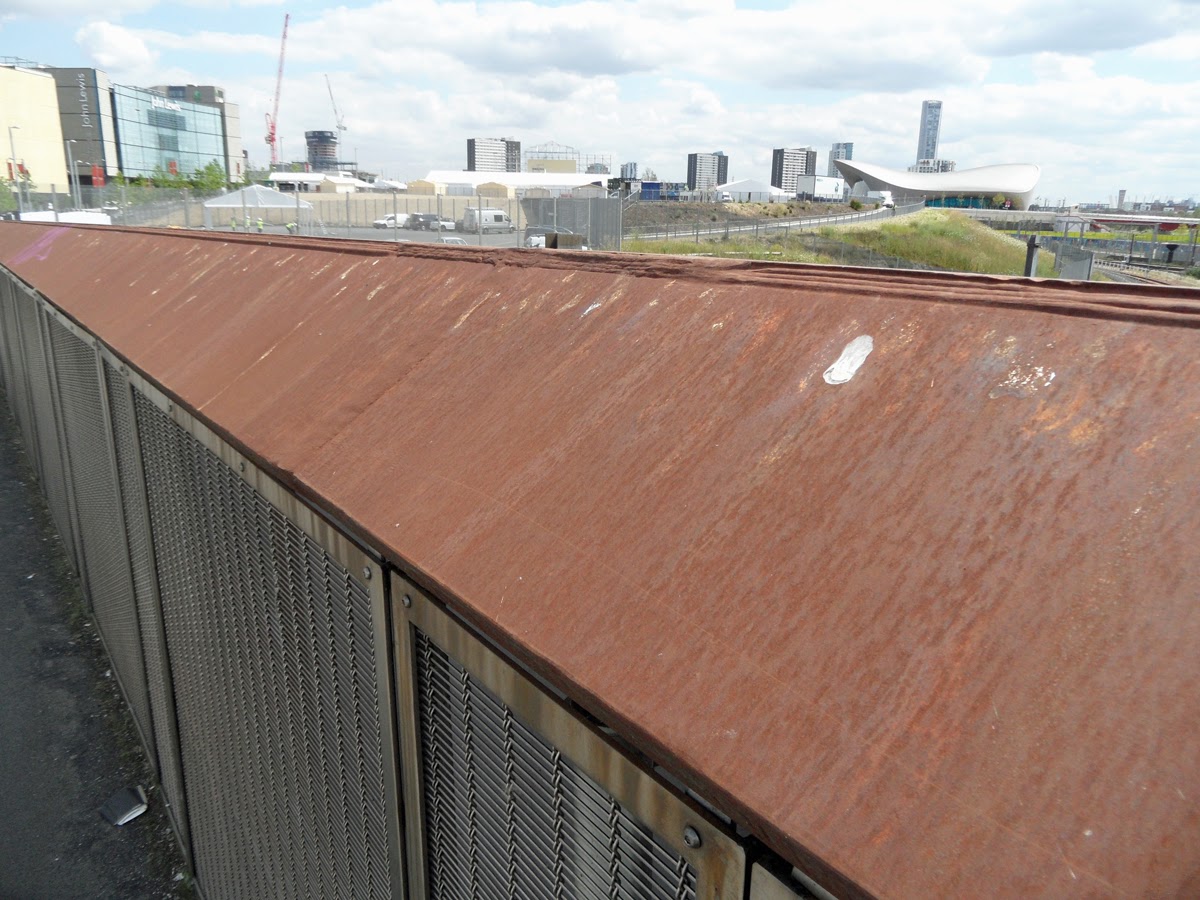 The bridge's most interesting feature is the architectural patterning to the web stiffeners on the external girder. The profile of the stiffeners is varied along the length of the bridge to create a "wave" effect. Anti-climb plates have been included unobtrusively.

Every third stiffener is required structurally to stabilise the girder against buckling, while the others are slightly thinner and entirely architectural, The wave pattern has no structural rationale to it, which I think is a shame, as the web and flange buckling effects are not constant over the span and therefore could perhaps have been used to inspire the stiffener geometry. 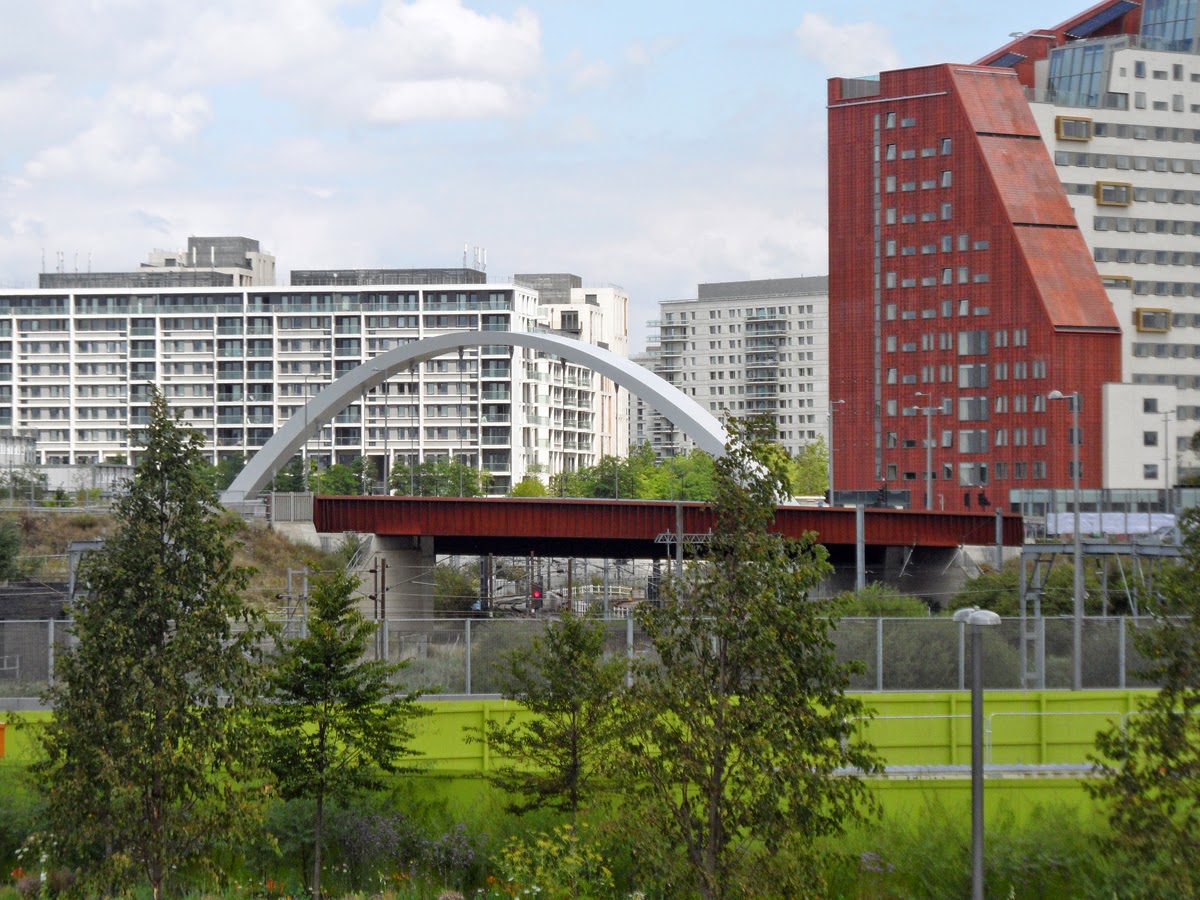 Unfortunately, this fascinating girder faces onto the railway, and areas of land inaccessible to the public. It can be seen from a distance, as in my zoomed-in photograph here, but not from close at hand. If you want to see what it looks like, try the Knight Architects website linked below. I am unclear whether surrounding developments will leave this highly sculpted facade permanently invisible to the public! 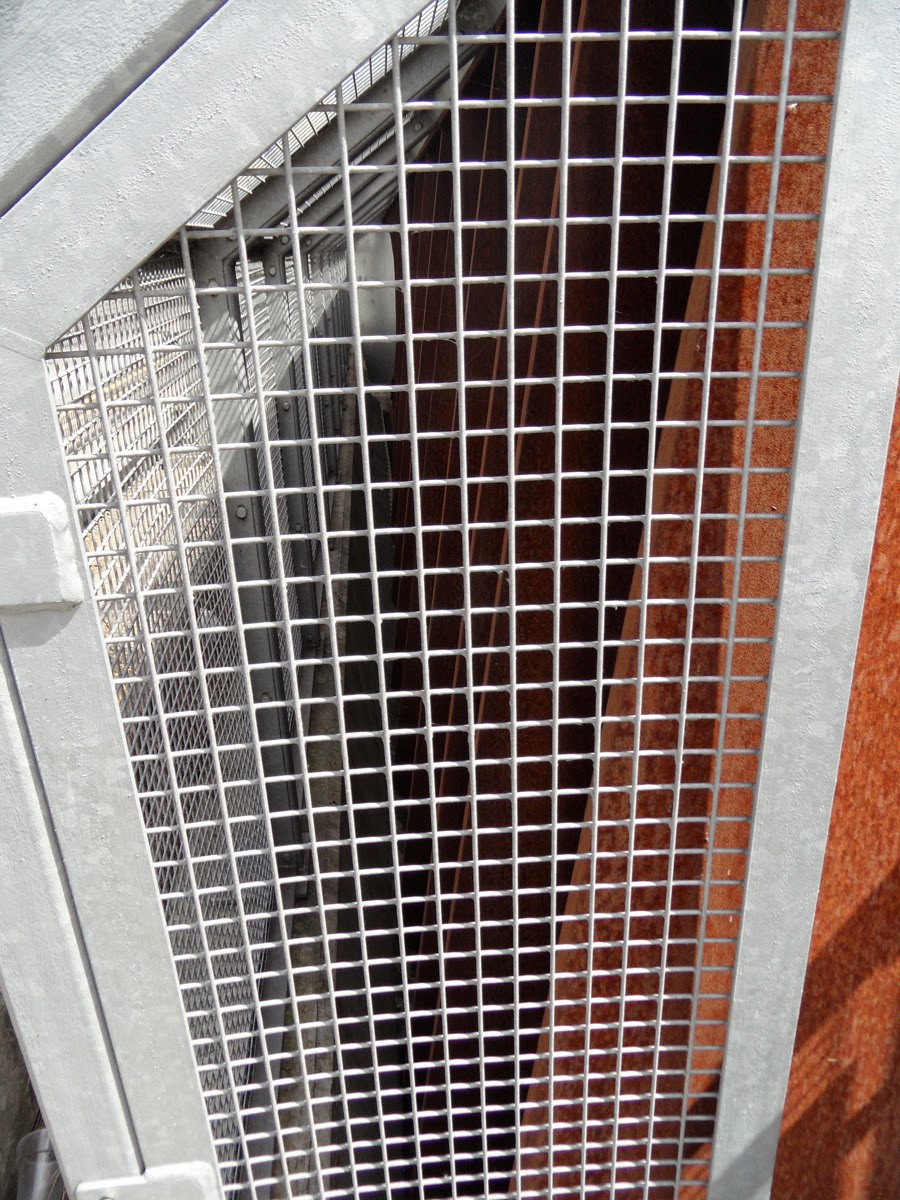 On the side where the bridge abuts the presumably pre-existing highway bridge, it has the same sculpted girder, except here the girder is hidden within a cage, perhaps to ensure its sheer visual awesomeness doesn't escape? 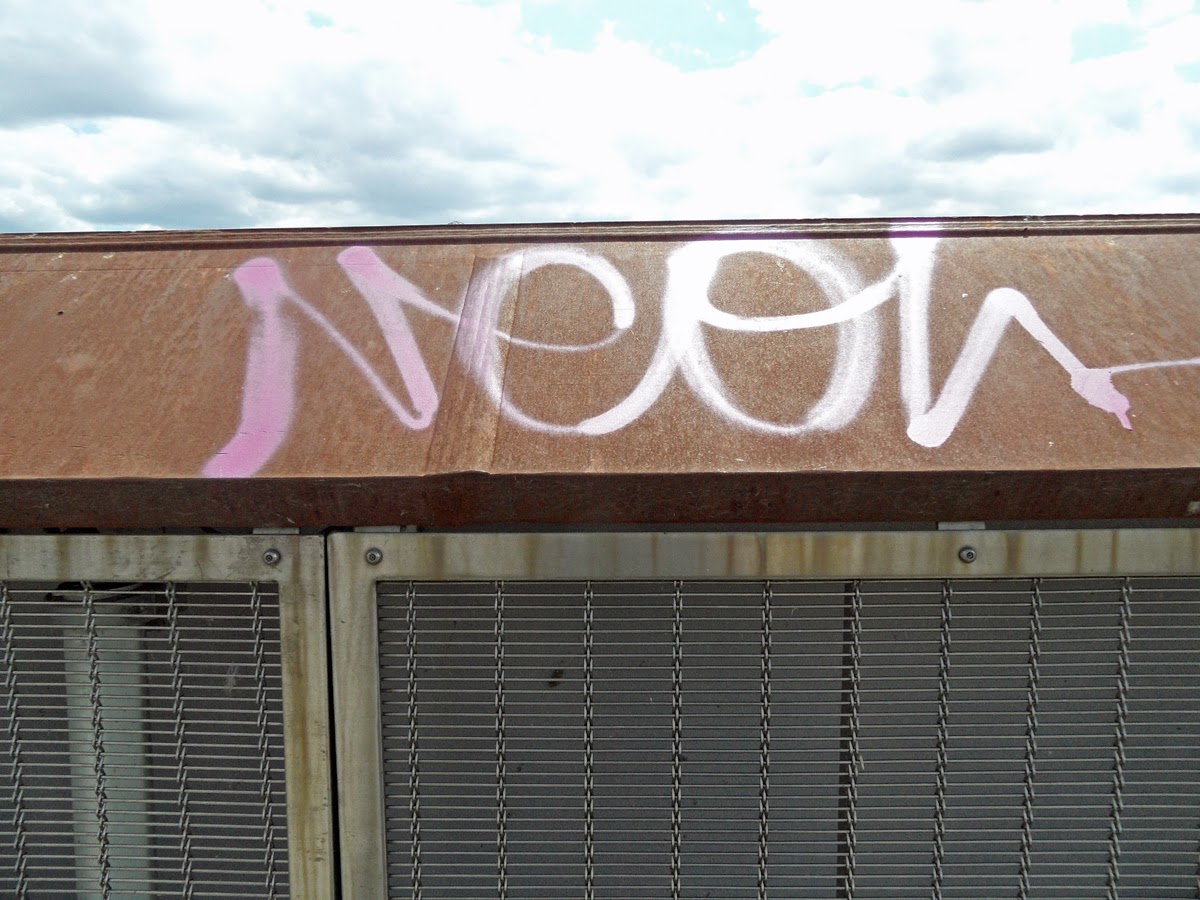 As I couldn't get a decent photograph of the bridge from its most interesting side, I've been reduced to offering close-ups of the inside face of the girders, in the hope that there are some keen students of weathering steel out there. The inside faces are protected by stainless steel mesh covers, with lighting accommodated behind. However, the upper part of the girder, a "steeple coping" intended to prevent delinquents walking along its length, has already suffered from graffiti, which will be tricky to clean off from this material. The upper girder weld also looks pretty awful. 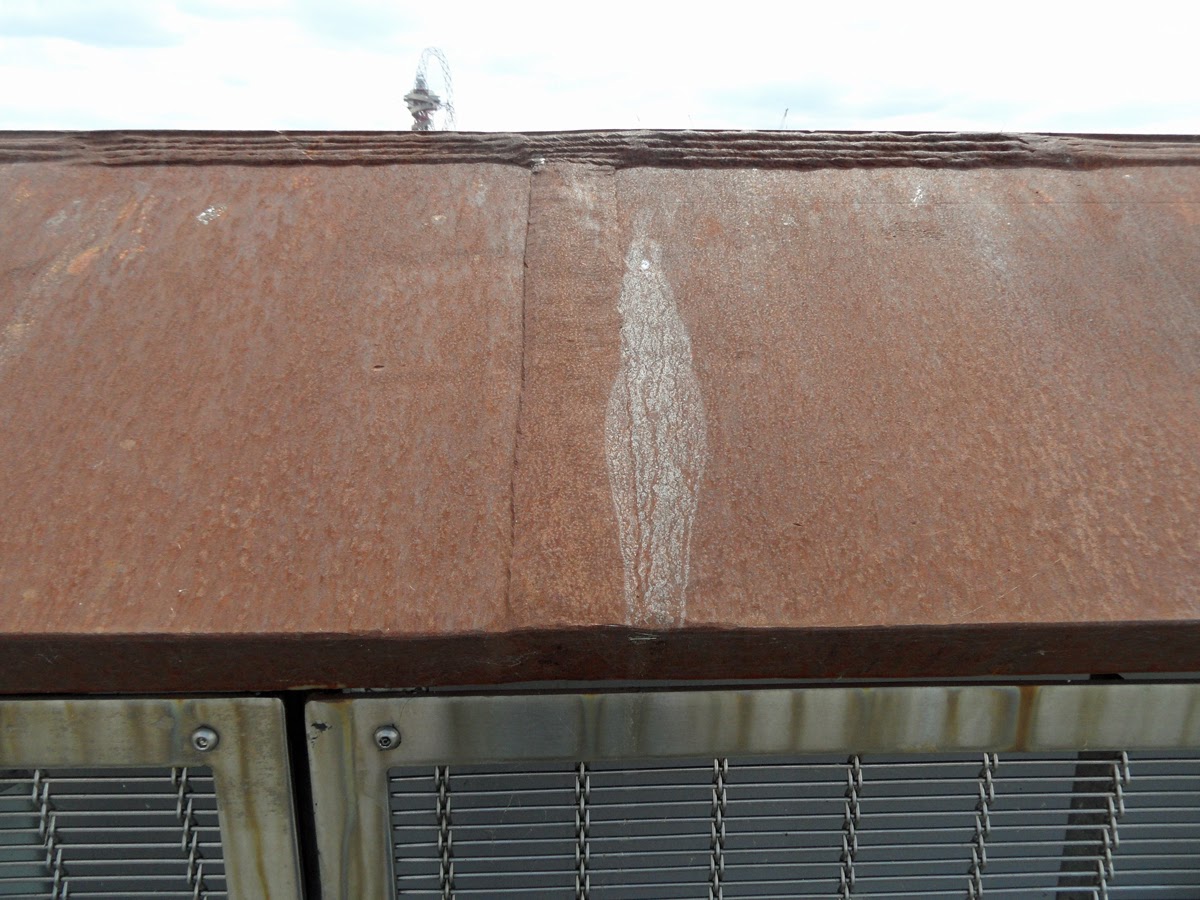 This poor bridge has been horribly compromised by the realities of its location, and worse, by the way it has been accommodated in the site. Ugly guardrails and palisace fencing at its end add to the impression that the designers have provided the concept for the bridge but been offered no involvement in how it integrates with its approaches.

For a structure with such interesting visual potential, it has been horribly mistreated.

Posted by The Happy Pontist at 9:08 PM

I see architects have fallen in love with the rusty steel plates all over the world. However, very often they forget practical implications of using it, as can be seen on this bridge, and e.g. at the recently opened Várkert Bazár in Budapest, which also suffers somewhat from the exaggerated use of weathered steel. (although I haven't been able to google up good photos about it, this one shows a "masterpiece" of a wheathered steel parapet at the site: http://hvg.hu/ingatlan/20140923_Lazar_csak_egyszer_adtak_at_a_Varkert_baz/)
Ironically speaking, such oarapets are good means of protecting and preserving our structures, since no one would lean against them. The drips of rusty runoff water also keep the cleaning and maintenance staff busy.

On the other hand, I really like the use of weathered steel where its use is really "thought-through", such as at the Gellért square metro station in Budapest: http://www.portfolio.hu/vallalatok/varoskep/vilagraszolo_sikert_aratott_a_negyes_metro.197311.html