Britain’s major cities can be divided into those with a strong connection to the underlying landscape, and those where the landscape has been obliterated or appears featureless, lending a decided lack of character to the urban fabric, which architecture and town planning struggle to rectify. In the former camp are the river cities, London, Bristol, Newcastle and Glasgow among them, where a major river was the reason for the city’s existence and continues to anchor its layout, as well as those with central parkland, such as London (again), or Edinburgh (the latter particularly well-blessed in this respect). In the latter camp you will find Birmingham and Manchester, city centres defined primarily by the relationship between their shopping centres and railway stations (or worse, by an inner ring road).

Manchester appears to have recognised this deficit for some time, with a long-held desire to shift commercial and leisure activity westwards, into the less economically sensitive Salford, in the process reconnecting to the city’s main natural waterway, the River Irwell (which defines the Manchester / Salford boundary). I’ve previously visited Santiago Calatrava’s Trinity Bridge, a typically elaborate structure which spans this river and which sought (with, I think, limited success) to trigger riverside regeneration.

There’s no real shortage of road crossings of the River Irwell, but successful development in Spinningfields on the river’s east bank, and the planned Greengate development on the river’s west bank, have triggered the construction of two new footbridges within the last year. These form part of a wider River Irwell masterplan intended to make it a far more central feature in city life, including the construction of new riverside paths and walkways.

In this post, I’ll cover the recently completed footbridge which forms a gateway to Greengate, and in my next post I’ll address the bridge at Spinningfields. 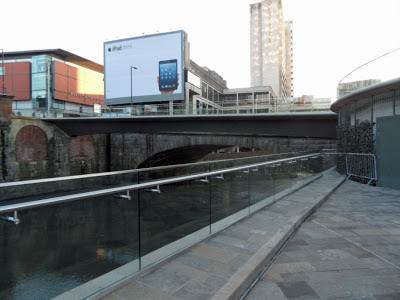 The Greengate footbridge has been built to the north of Trinity Bridge. Its east end sits close to Manchester Cathedral, and its west end spills out towards a new plaza area which I assume to be the first part of the as-yet unbuilt Greengate scheme. 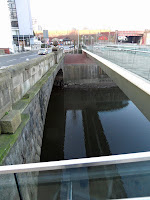 It appears to be something of an unnecessary indulgence, sitting as it does no more than 5m away from the existing Victoria Bridge, which already provides a perfectly serviceable foot crossing of the river. Evidently, the Greengate developers don’t see that as a suitable entrance to their grand scheme, and I can certainly imagine that the lack of a new bridge would enhance the sense of the development as peripheral to the city centre, rather than as a continuation of it (much of the area on the Manchester side was re-developed following the 1996 IRA bombing, but this stopped well short of the riverside, a missed opportunity). 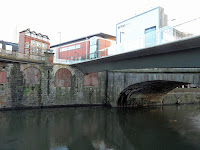 The river here sits deep below the surrounding streets, particularly the east bank, and consequently there is no structural rationale for supporting the structure from above. The designers therefore had to use other means to create the sense of a gateway, and these relate mainly to the quality of the finishes on what is, by any standards, a very minimalist contemporary design. 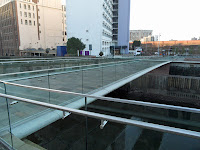 From many angles, the bridge structure seems almost to disappear, something enhanced by combining generous overhangs on the concrete bridge slab with inclined faces to its supporting spine girder. This means that you have to walk some distance beyond the bridge before you can see its primary structure at all.

The spine beam is a steel box girder, which supports a series of precast concrete deck slabs. The bridge abutments are hidden behind the existing riverside wall facing, enhancing the overall impression of minimalism. I can imagine the foundations to have been significant challenges, particularly on the east side where it can be seen that the riverside wall is actually voided in construction, with a series of arched recesses visible. 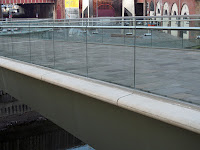 The bridge has structural glass balustrades topped by stainless steel handrails. The balustrading extends beyond the bridge at both ends, and defines it as merely the opening element in the plaza’s hard landscaping. The result is a very contemporary design. I guess that at night it may merit a “blade of light” description, although I haven’t been able to locate any night-time photographs.

A typical question with all-glass parapets is their susceptibility to vandalism, and the ensuing cost of occasional replacement panels. As a result, they are usually limited to well-policed internal use, in shopping centres and similar settings. Time will tell how well they survive in the Manchester / Salford city centre.

I haven't been able to find any information on the bridge's designer, contractor, or cost, so if anyone can provide further detail, please post in the comments.

The following links suggest that Arup and Grontmij might be involved, with Carillion as the contractor. The are some drawings attached as a pdf to one of the links. I dont know if these are up to date though.

Many thanks for those links, yes this PDF includes useful drawings of the bridge: http://www.legislation.gov.uk/uksi/2011/428/pdfs/uksi_20110428_en.pdf

This project has been through a number of configurations over the past few years, but for the most recent (as built), the overall layout was created by landscape architects Whitelaw-Turkington who were taken over by Grontmij. Arup designed the footbridge and did all the structural engineering.
Along with plans for creating pedestrianising streets around this area, the footpath on the main bridge may be removed as bus routes are rediverted.

It's ruined the northerly view of Victoria Bridge, being so close.