The modern bridge designer is only rarely a solitary individual. Most designers, however personally creative they may be, are part of a team, and in the case of the largest bridges, a very large team indeed. This is an inevitable feature of the complexity of both the structures designed and of the process whereby design is conceived, refined, and detailed. One result is that many fine designers are effectively anonymous – it’s rare to be able to point to a bridge and to know who the lead designer was, and particularly rare to imagine that even if you did, you have identified someone who was the key driving force behind all aspects of the design activity.

This is perhaps one reason why the Swiss bridge designer Jürg Conzett is such a significant figure. He is the descendant of a remarkable line of Swiss bridge nobility, most notably Robert Maillart and Christian Menn, men who married clear aesthetic vision to a deep intuition for structural principles, and a pragmatic taste for craftsmanship. It would not be unfair on the rest of the modern bridge design community to note that Conzett is a bridge design genius. I am sure he would be the first to admit that the bridges credited to him are also the product of considerable teamwork, but they do give the strong impression of the hands-on involvement of an auteur at every stage.

The Pontist has been fortunate enough to visit two of Conzett’s best known bridges, the Punt da Suransuns, and the Traversinersteg, both in the company of the man himself. These are lightweight, high-tensile structures, exploiting the anchorage capabilities of Swiss mountain bedrock to create undoubted masterpieces. The second of these was considered sufficiently noteworthy to be the subject of a marvellous photo-book by the excellent German photographer Wilfried Dechau, documenting its seemingly perilous construction high over an Alpine ravine. 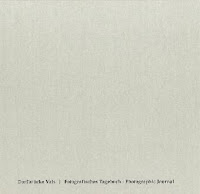 I have not had the pleasure of visiting Conzett’s more recent structures, which include a new highway bridge in the centre of Vals village, a place best known to architecture fans as home to Peter Zumthor’s thermal baths. Luckily, it too has been documented in another splendid Dechau photo-tome, Dorfbrücke Vals – Photographic Journal (Wilfried Dechau, Ernst Wasmuth Verlag, 144pp, 2010) [amazon.co.uk] 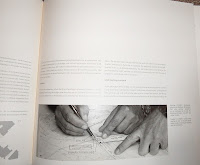 As with its Traversinersteg sibling, the book is a delight to hold, housed in a high quality slipcase and filled with marvellous photographs. These are accompanied by several illuminating essays. Klaus Siegele discusses the centrality of water to Vals, a village built on the banks of the Valser Rhine. As well as the thermal baths, the village is also known for its mineral water. However, it is the propensity of the river to flooding which led to a decision to replace the existing river span, a life-expired metal truss. 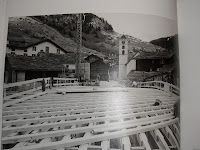 Patrick Hannay contributes an essay which manages to put the bridge in the context of other Conzett projects, of Swiss stone, and even of Tolkien’s bridge in the Moria caverns. Ursula Baus interviews the architect Zumthor , who chose the appearance of the flood walls and set the basic parameters for Conzett’s design – that the bridge should be an arch, and that it should use local Vals stone. Conzett himself discusses the bridge’s structural engineering, as well as that of two nearby footbridges, the Milchbrücke and the Rovanadabrücke, which formed part of the same project. 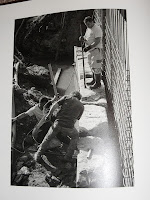 I will confess that I have a general understanding how the Dorfbrücke (“village bridge”) works structurally, but am not entirely sure I understand all the details. The deck is a reinforced concrete slab, spanning transversely between two concrete edge beams, which are post-tensioned. These form the tension member, or “bow”, in what must be the world’s least conventional bowstring arch bridge. The arch is formed of radially placed stone slabs, above the deck but resting directly upon it (there’s no gap between deck and arch, because these bridge side walls also serve to hold back floodwaters and prevent it from spilling it out onto the village roads). The deck is then hung from the stone arch by means of a series of concrete “fingers” which penetrate the stonework. 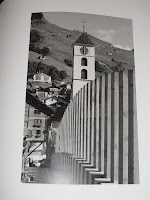 The result is a bridge of exceptional structural ingenuity, but not one which has immediate visual appeal. It is certainly not elegant, with the stone side walls towering above head height – there are no views of the river from it. It is a bridge as a confining corridor, rather than as a platform from which to admire its surroundings. It channels views towards the village church at one end.

Its visual appeal is not far from that of brutalism, the 1960s and 1970s architectural trend towards robust, unadorned concrete in stark, simple geometry. It is a blunt instrument, saved mainly by the attractions of the finely cut local stone, and the general sense of craftsmanship which is one of Conzett’s hallmarks. It won’t be remembered as his finest bridge, but it is as structurally remarkable as the others. 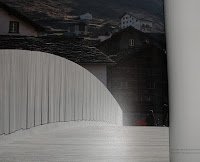 Dechau’s photographs depict the finished bridge, but concentrate for the main part on a record of its construction, including the demolition of the old bridge, and a number of photographs of the site workers and of curious onlookers. Several photographs range beyond the bridge to depict the mountain streams which feed the river, and a nearby dam, a towering concrete monolith.

Certainly, Dorfbrücke Vals – Photographic Journal is a book for collectors and connoisseurs only. The more casual reader may prefer to await a broader overview of Conzett's career. But it is a very well-matched companion to this otherwise inscrutable bridge, bringing to life the story of its construction, and I enjoyed it.