Opened in early 2001 at a cost of £1.8m, the Lune Millennium Bridge in Lancaster, was one of a rash of pedestrian bridge structures taking advantage of a loosening of development funding and the desire to attach the Millennial label to anything in sight. Lancaster's span across the River Lune formed part of a wider "Lune Millennium Park" project, an important link in a traffic-free coastal route. 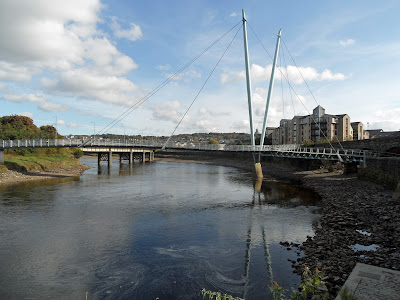 The bridge was designed by Whitby Bird (now part of Ramboll), and built by Henry Boot Construction. Its main deck is 114m long, with a longest span of 64m. It's basic form is that of an asymmetric cable-stayed bridge, with the main support on the south side of the river, where ground conditions were apparently better. However, it's clearly much more complex than that simple description suggests. 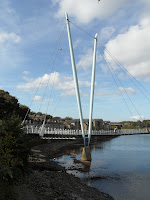 Twin masts are poised on a conical concrete pier. A cable ties the masts together, and stays support the main span. Further stays connect to the back span and also to a 30m long "gangway" side span. This arrangement is unusual but not unique - there are other British twin-mast examples at Lockmeadow, Newport, and Ashford.

In plan, the main deck curves a little like a boomerang, connecting a high-level footpath on the river's south bank to the the river's north bank. From the bend in this path, the separate gangway drops downwards to connect to the south bank quayside. The links to Google and Bing maps below will make this clearer (at the time of writing, Bing's overhead view dates from when the bridge was still under construction, showing temporary works in the river prior to mast and deck erection). 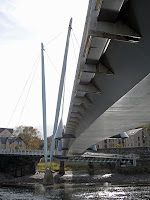 The main bridge deck is a 4m wide, 600mm deep steel box girder, which provides the torsional stiffness necessary for the cranked span. It is suspended from 40m tall cigar-shaped steel masts of maximum diameter 1.2m. A number of features of the structural configuration seem a little puzzling, and also led to considerable difficulties during construction (the first attempt to lift in the masts by crane, had to be abandoned for example).

The load on the mast "V" comes mainly from the river span, and tends to pull the V out-of-plumb. Along the main deck axis, this is resisted by the back-stays, which are tied to the very short south span back span, rather than directly to foundations on the shore. 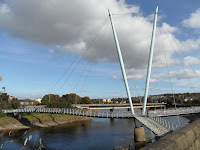 This results in a better balance of horizontal force within the deck, but must complicate the end-of-span support, where the south bearings have to resist uplift. Away from the main deck axis, the "V" is prevented from tilting by two cables which again are tied to the gangway rather than to the shore. Again, tie-down bars have been incorporated at the end of the gangway to resist what in this case must be a substantial uplift force. To me, it feels odd, as tying the masts directly to the foundation would appear much more straightforward. 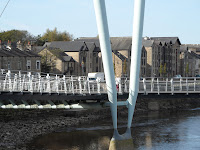 The main deck is supported at both ends, and by the cables, but also at two other points. Twin bearings take some of its weight directly onto the gangway's tubular spine beam (presumably to provide sufficient torsional stability), and an additional pier is required at the distant end of the main span some way in front of the main abutment. Looking at the bearing on this pier, it is yet another tie-down against uplift. Having a pier here rather than another cable support also helps reduce the height requirement for the masts, while still satisfying navigation requirements. Overall, it seems to me that the designers found it quite hard work to ensure adequate stability for what at first seems a fairly straightforward and elegant conceptual layout. 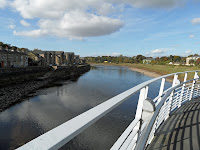 I visited the bridge in October this year, and was generally impressed. The overall scale and silhouette of the bridge is not inappropriate to the surroundings, which are sufficiently level and open to give the structure space. The masts are well-formed and the cable layout pleasingly uncluttered, and the bridge offers different views and vantage points from every direction. Sometimes with a bridge of this geometric complexity, you can find a viewpoint which is visually jarring, but I didn't find that here. 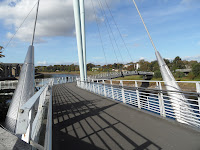 Vibration is perceptible when crossing the bridge, but its magnitude under normal foot traffic was too small for me to get a useful measurement on my smartphone accelerometer, so I guess it is not enough to pose any concern. The bridge was being very well used, so it appears to have been a sound investment. 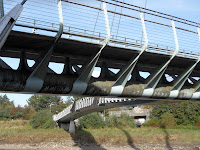 The gangway is quite different to the main span. It consists of an ovoid steel spine beam (presumably two circular sections split and joined by flat plates), supporting the deck via a series of folded-plate ribs. These give it considerable visual interest, more so than the relatively anonymous main span. They also result in significant pattern staining, where water has run through the perforated aluminium decking. 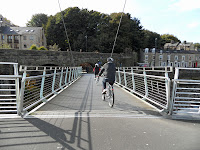 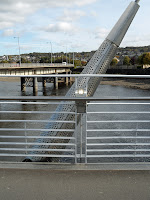 Another very noticeable feature of the bridge is the use of conical, perforated stainless steel shrouds at the lower end of each cable. From a distance, these are not very obtrusive, but from closer at hand they seem quite unnecessary. The only engineering justification I can see for their presence is that they reduce the risk of vandalism to the cables, but this can be achieved as easily with narrower steel sheaths.

On the whole, I like the Lune Millennium Bridge. It has a few peculiar details, but they don't significantly compromise its overall clear and slender silhouette. It's not as flashy (and certainly nowhere near as expensive) as some of its Millennial brethren, and that's no bad thing either. It will not be a straightforward structure to maintain, but the local authority could certainly start by considering giving it a bit of a clean.

This is a truly beautiful bridge to walk across.