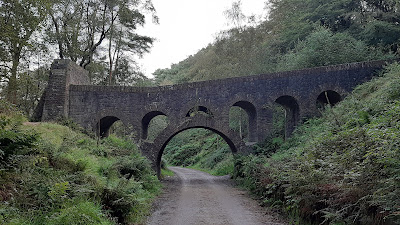 This is an interesting bridge that I stumbled across on a visit to Rivington Terraced Gardens, near Bolton in Lancashire.

The Gardens were built over a two decade-period starting in 1905, for industrialist William Hesketh Lever, also known as Viscount Leverhulme. Lever made his fortune with his family firm Lever Bros (later to become Unilever), selling Sunlight Soap. He had made a home, the Bungalow, at Rivington, and the surrounding estate was landscaped by Thomas Mawson, who later became the first President of the Institute of Landscape Architects.

Most of the Gardens then fell into ruin, but a Heritage Trust has been busy in recent years clearing vegetation and conserving the site's historic structures (there are eleven Grade II Listed Buildings within the site).

The Seven Arched Bridge carries a footpath over an access track, and was reportedly inspired by a bridge that Lever had seen while visiting Africa.

Historic England lists the bridge as part of a group of structures including a staircase, walls and a summer house, all of which proceed up the hill from the bridge. All these structures are built in a common style using thin slabs of gritstone.

Historic England's listing suggests that the design for the bridge was based on a bridge in Nigeria. Lever did source palm oil for his soap from the British colonies of West Africa, but he is also known to have visited Belgian Congo (now the Democratic Republic of Congo) in 1911 to set up palm oil plantations.

There is an image of a bridge in Albertville (now Kalemie, in the D.R.C.) from circa 1930 which might be relevant - I've certainly not found anything else online (there are further images of the same bridge on these pages).

In any event, this is not an elegant bridge, but it is interesting for its unusual architectural style, and the way its robust mass is built up from fine detail.

Posted by The Happy Pontist at 7:18 PM

I am just adding a few links after being inspired by your post. Should this be called the 8 arch bridge? The original picture shows 7 small arches above a single main arch. The story about the flight to Lagos, Nigeria looks unlikely to be true as Imperial Airways do not appear to operating until much later. The Pont des Abymes bridge near Albertville in France seems to be another bridge with some similarity.

Many thanks for the additional research, some interesting links there! I'm sticking with my Congo theory, though.