I suspect that for many people, Holborn Viaduct in London is known mainly as a street name rather than as a bridge: the street extends for around 425 metres (1400 feet) between Holborn and Newgate Street, but only a relatively short length of bridge is visible where the street passes above Farringdon Street. Elsewhere, most the street is hemmed in by buildings either side. 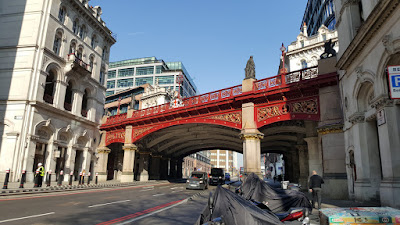 What can be seen today bears little resemblance to how this site looked in the past. What is now Farringdon Street was once the River Fleet, running north to south through a valley before spilling into the River Thames. The Fleet can be seen on the mid-16th century "copperplate map" of London, which also shows the old Holborn Bridge which then spanned the river.

Fleet Ditch was used as an open sewer, and was eventually covered over, section by section, and converted into a buried sewer. Today it remains there, running below the roadway down to the Thames.

Between 1863 and 1869, the entire valley was improved in a scheme designed by city surveyor William Haywood. The southern end of the scheme included the reconstruction of Blackfriars Bridge, while at Holborn, the old bridge was removed and replaced with what is now Holborn Viaduct. Haywood worked with engineer Rowland Mason Ordish on the viaduct's design.


A contemporary drawing (above) shows the full extent of the Holborn Viaduct construction. Most of its length consists of brick arch spans, enclosed on their ends to form chambers, and in addition to the Farringdon Street structure, there are special spans over other roadways and railways. A drawing made in 1941 reveals the structure, exposed by bomb damage to adjacent buildings (below).


Work on the new bridge started in 1867 and was completed in two years. The spans over Farringdon Street use paired cast-iron arched members supported on granite piers. The decking was originally constructed from cast-iron troughing topped in mass concrete. 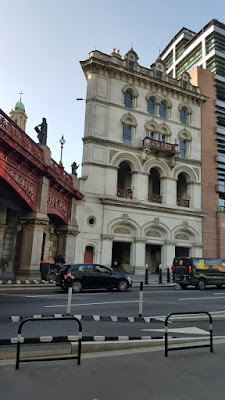 On all four corners of the bridge, a large building was constructed to house a staircase connecting the upper and lower roadways. The one shown in my photograph is a post-war reconstruction, as the two north buildings were damaged by bombs during the Second World War.

The visible bridge is spectacular and ornate, and does make me wonder quite how its construction was funded. It is adorned with ornamental lighting, four statues (representing commerce, agriculture, science and fine art), and the ironwork on the main elevations is finely detailed and highly decorative.

From below, entrances into the masonry vaults can be seen, and perhaps income from letting these spaces and the staircase buildings helped contribute towards the cost of construction.

It can also be seen that the bridge has been extensively altered. By the end of the 1980s, the deck was found to be in poor condition due to water penetration, and calculations suggested the bridge to be seriously under-strength for modern heavy goods vehicle loads. DHV Burrow-Crocker Consulting (since merged into the Waterman group) were appointed to examine, assess and design improvements to the bridge. 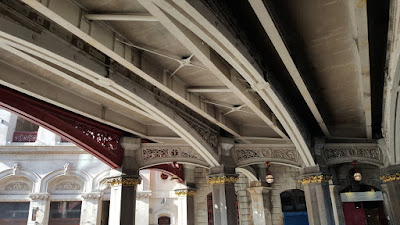 The altered arrangement is visible in the photographs and explained in a diagram below taken from a 1993 technical paper. The existing decking was completely removed, and new steel-concrete composite decks inserted in between the cast-iron arch girders. The existing piers were extended upwards in reinforced concrete to encase the ends of the cast iron members, and the new bridge deck was supported via bearings onto the concrete extensions. 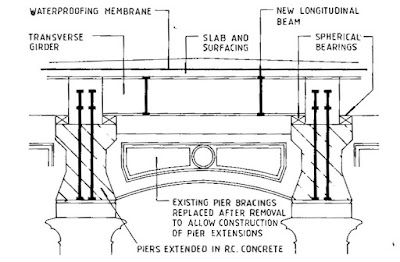 It's an exemplary piece of engineering, leaving the historic structure seeming largely unaltered from most point of views, and retaining most of the original fabric. The extensions to the piers are especially well-detailed, and I would not have noted them if I hadn't read the paper.