I've wanted to feature artist and bridge-maker Richard La Trobe-Bateman here for some time. Late last year, I finally got hold of a copy of his "Making Triangles" book, and Richard has also kindly shared several photographs for me to use. 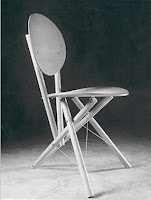 La Trobe-Bateman has been creating art since the late 1960s, initially making wooden furniture. His early chairs were in an arts-and-crafts style, evolving over time into examples with far fewer individual elements. His works also moved away from a rectilinear style towards the increasing use of triangular frames.

As any truss designer knows, this geometry provide stiffness with minimal material and without bending of individual elements. In three dimensions, the triangles naturally became tetrahedra, and in 1987 La Trobe-Bateman made his first bridge. 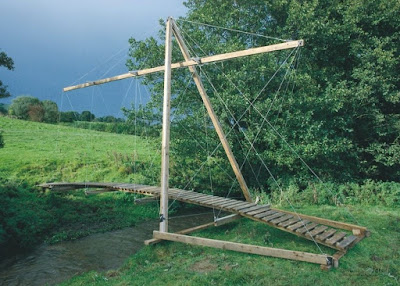 Pictured above, this "hanging boom" bridge was a short span over a stream, a simple A-frame mast supporting a single crane-like cantilever spar, with the deck suspended from thin galvanised steel wires and the various timber pieces stabilised by a further array of triangulated wires.

Since then, roughly thirty of the artist's bridges have been built and exhibited throughout the UK, and in one or two cases abroad. The use of timber and wire is a common theme, and the structures are often experimental in arrangement, if often inevitably drawing on forms better known from larger bridges.

Many of the bridges are private commissions. Several are variations on a tripod form, with a couple of examples pictured below, a 15m long span passing through a tree (1995), and two 9m span twin bridges (1994), built with various oak, douglas-fir and stainless steel elements. These give the initial impression of something anyone could throw together with a bit of trial and error: beginning with a simple form and adding only one element at a time until the whole assembly is stable. 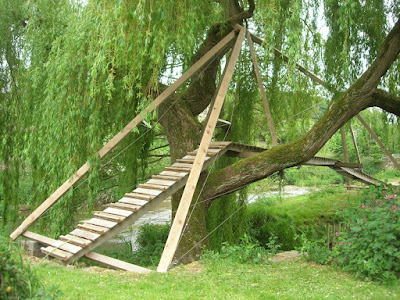 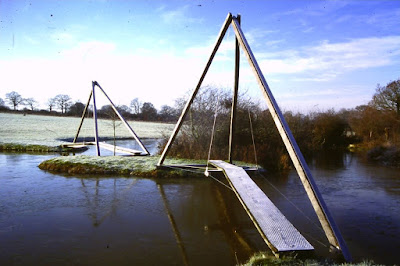 La Trobe-Bateman's methodology is to develop geometry using smaller scale models, to ensure the form exhibits structural clarity while minimising material, both typically the concerns of bridge engineers. The models also allow the method of construction to be rehearsed, and confirm that any given geometry is, in principle, stable.

A more recent example of the same form was built at Tassajara Monastery in California, a 15m span douglas-fir tripod structure which was first trial-assembled in the studio before being erected on site in 2006 using only a single chain-winch. The construction process was recorded online by Courtney Skott at Flickr, and also in a book by Donald Fortescue, who later documented its rebuilding in 2012. 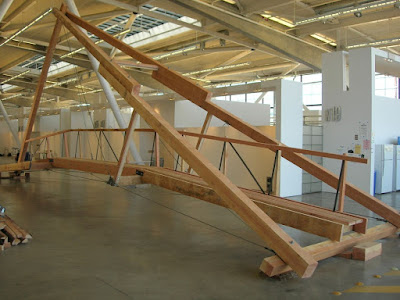 This design illustrates one way in which these are sculptures as well as footbridges - the structural form is self-contained, simply supported, held together with tie cables like a triangular bowstring truss. So far as I can tell, all these designs avoid imparting any horizontal thrust onto their foundations, they are as stable on a smooth gallery floor as they are on site.

A professional bridge designer might take a different approach, using thrust-bearing foundations to ensure that parts of the frame are stable temporarily before all elements are complete. There are other details which a professional designer might avoid - most notably the lap splices visible on two of the main struts. I think a professional would have made a butt-splice, or a machined lap-splice to minimise eccentricity of loading and reliance solely on the strength of fixings. 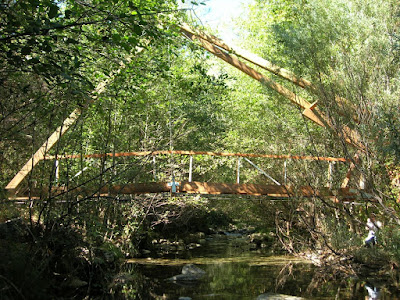 This is evidence of an artist's philosophy rather than an engineer's - one of La Trobe-Bateman's stated design principles is to "get closer to the earlier stages in converting trees to useable pieces", and I guess that means avoiding over-engineering.

Several of the bridges also owe a direct and presumably conscious debt to the patent truss bridges of the 19th century. This next example, completed in 2008, is described by La Trobe-Bateman as a 6m span Bollman truss, and does share Wendel Bollman's arrangement of multiple suspension cables each attached near one end of the upper chord (here doubling as the handrail). 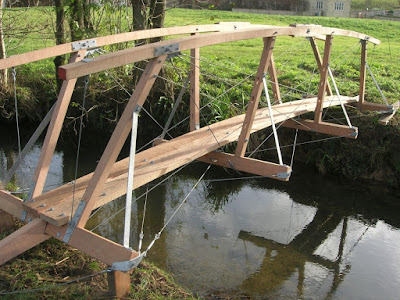 Another small bridge borrows (and adapts) the form of Albert Fink's truss, which used overlapping triangular frames below bridge deck level. In La Trobe-Bateman's 10m long 1989 adaptation, the truss struts are continued above deck to support the bridge handrail. 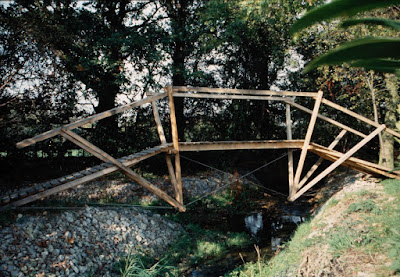 A similar idea was used in 1992 for what the designer refers to as a "bowstring bridge". This was a mere 4m long, in the form of an underspanned suspension bridge (compare for example Maryhill House Footbridge and Roxburgh Viaduct Footbridge as 19th century antecedents). I like the sense in this bridge that the parapet assembly is perched precariously on the central point, as well as the slenderness of the deck. 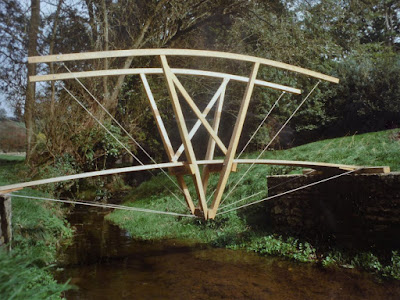 La Trobe-Bateman describes his work as "art as a byproduct of design". All the bridges are clearly functional, but it's notable that they are generally photographed without people standing upon them, emphasising the sense that these are art objects as well as bridges.

They may be designed to be experienced close at hand, but as an engineer, much of the appeal for me is in seeing them as structural assemblies and considering the relationship between static behaviour, embodied craftsmanship, and aesthetics.

This post is getting very long, so I'll conclude in a second post, covering examples of more publicly accessible bridges.
Posted by The Happy Pontist at 11:14 PM