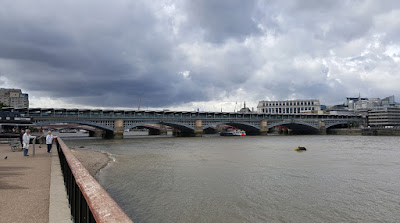 I've got a backlog of bridges visited over the last couple of months to write up and cover here, and I'll start with a bridge in London.

Railways first came to London in 1836, but it was 1860 before a railway bridge was built across the River Thames, Grosvenor Bridge. Others rapidly followed, Battersea Bridge (1863), Hungerford Bridge (1864), Blackfriars Bridge (1864) and Cannon Street Bridge (1866). Each bridge sought to bring travellers from south of the river closer to the key destinations of the north bank.

The bridge at Blackfriars was no exception, carrying the London, Chatham and Dover Railway (LCDR) across the river to Ludgate Hill station, and within a year or two of completion, further north along what is now the route of the Thameslink railway. The bridge was a five-span wrought iron lattice truss viaduct, supported on tall cast iron piers, and designed by the LCDR's chief engineer, Joseph Cubitt. This original bridge was dismantled in 1985, leaving only its piers and part of the south abutment behind. The remnant of the abutment still displays the lavish crest of the LCDR.

This bridge continues to carry the railway today, although it has been through considerable change. Originally, there was a railway station at the south end, although this was used by passengers for only two decades before a new station was built at the north side. This station remains in use, and was extended between 2009 and 2012 with longer platforms. A photovoltaic roof was added, making it reportedly the largest photovoltaic installation on a bridge in the world.

To accommodate the extended station, the bridge was widened, strengthened, and largely reconstructed, to a design by Tony Gee and Partners. The arch members remain those from the 1886 structure, but the original deck and spandrel columns were removed and replaced with steel elements, acting as Vierendeel trusses rather than as simple arches.

The bridge was widened to the east with one steel arch supported on the original masonry piers. These had their end elevations rebuilt.

On the west side, one of the three rows of cast iron columns from 1864 was taken down, and the 1886 bridge piers were extended laterally, supported on the original 1864 foundations. The widened piers support three new lines of steel arch ribs.

The work has been artfully done, and although the difference between steel and wrought iron arches is immediately apparent to a professional, I doubt that any casual visitors see this as anything other than a historic railway bridge. The shaping and disposition of the new arches sits happily with the old, even replicating the end hinges on each span.

The treatment of the western extension at foundation level is less visually successful, but clearly far less expensive than building new foundations would have been. The extension stonework doesn't match the detail on the east face, and the horseshoe collar which sits on the old foundation (precast concrete, masonry clad) feels a little awkward to me.

The detailing of the new spandrels is very well done, it matches the historic appearance very well. Overall, the reconstruction is a very impressive piece of engineering, and I think all involved must be very proud of what was achieved. The attention to detail both for permanent and temporary works must have been considerable. 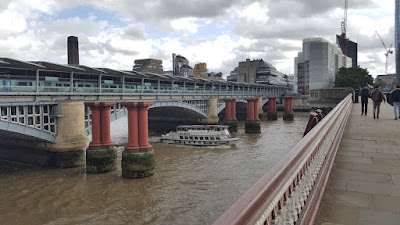 Posted by The Happy Pontist at 9:04 PM