Four finalists have been announced in London's Nine Elms / Pimlico pedestrian and cycle bridge design competition. They were chosen from a field of 74 entries. 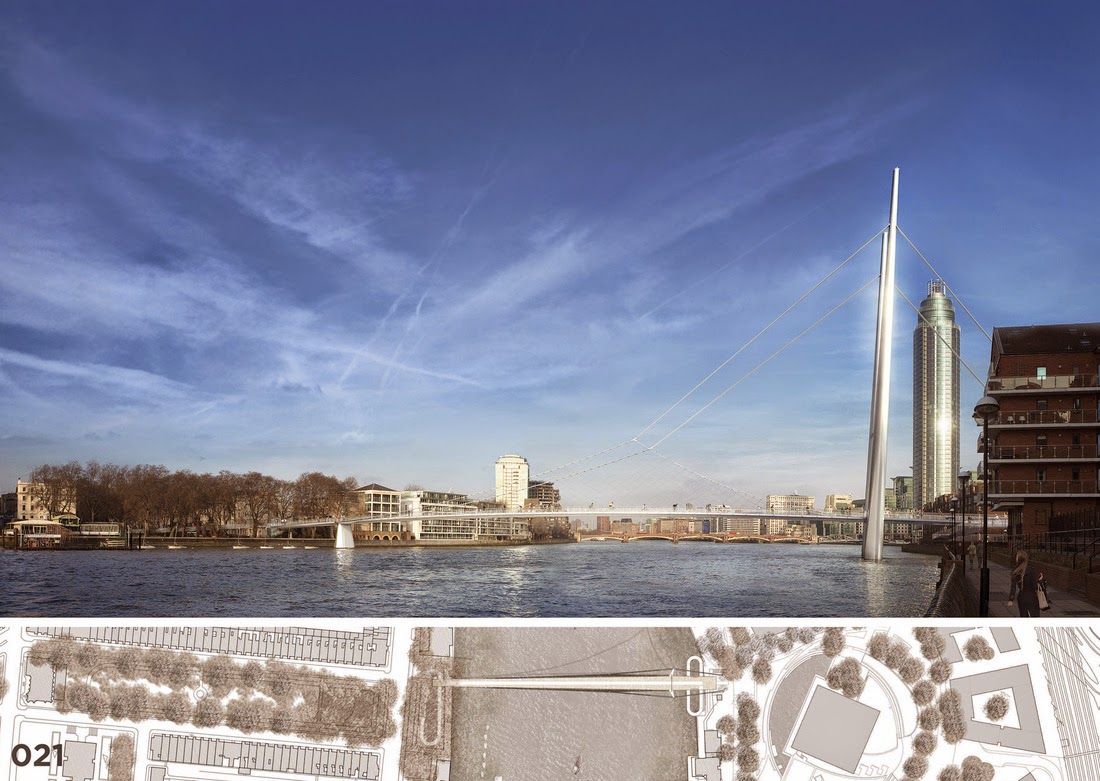 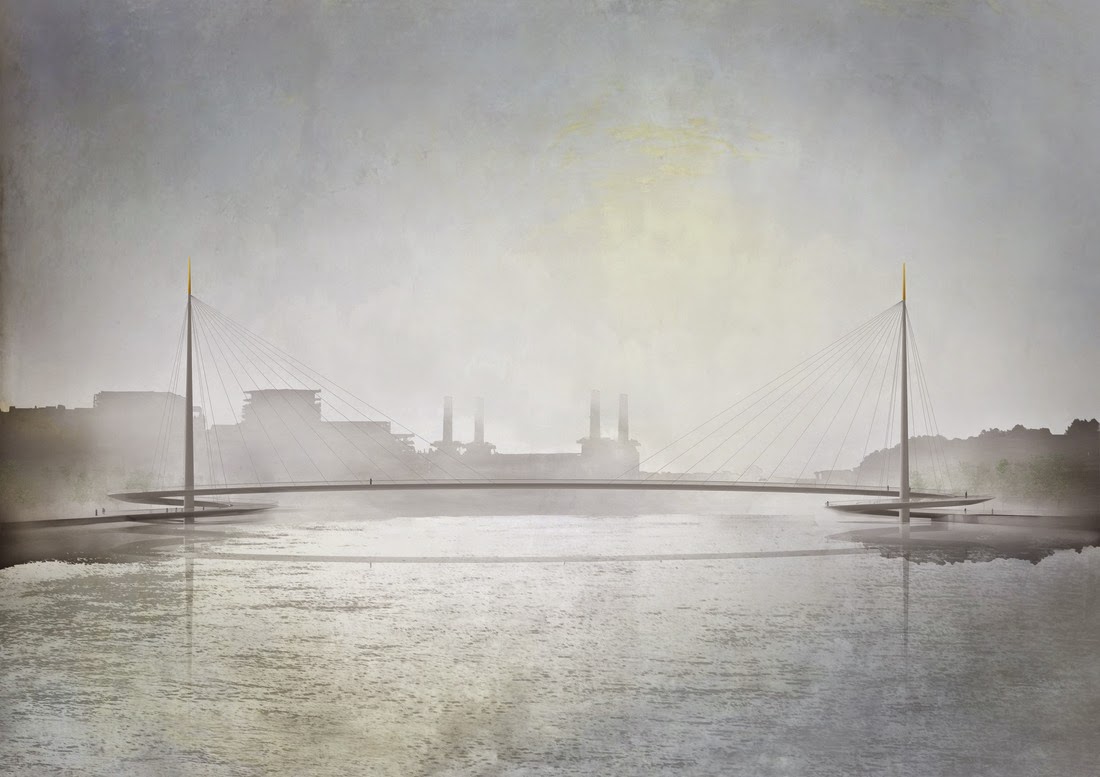 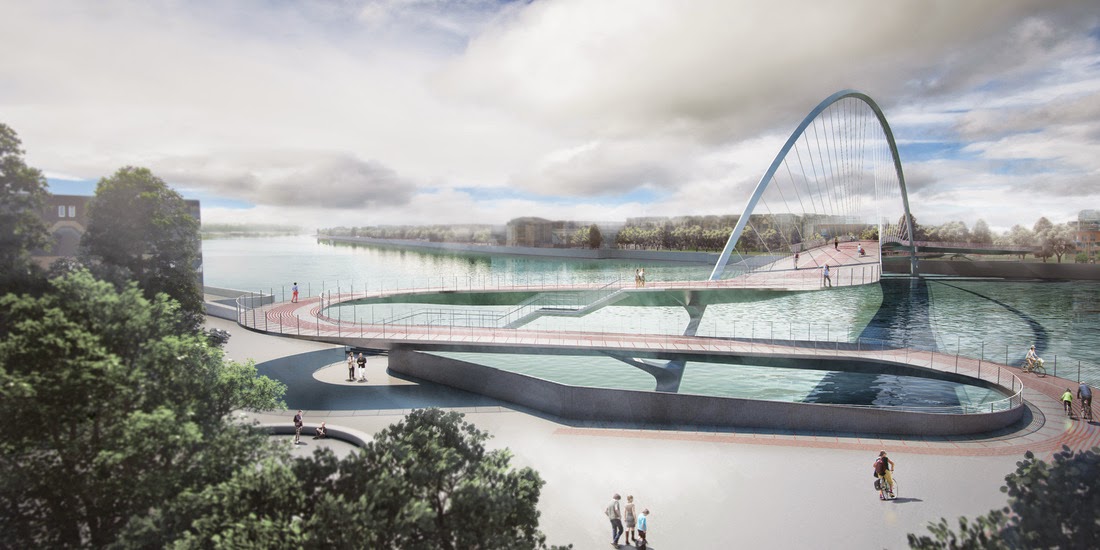 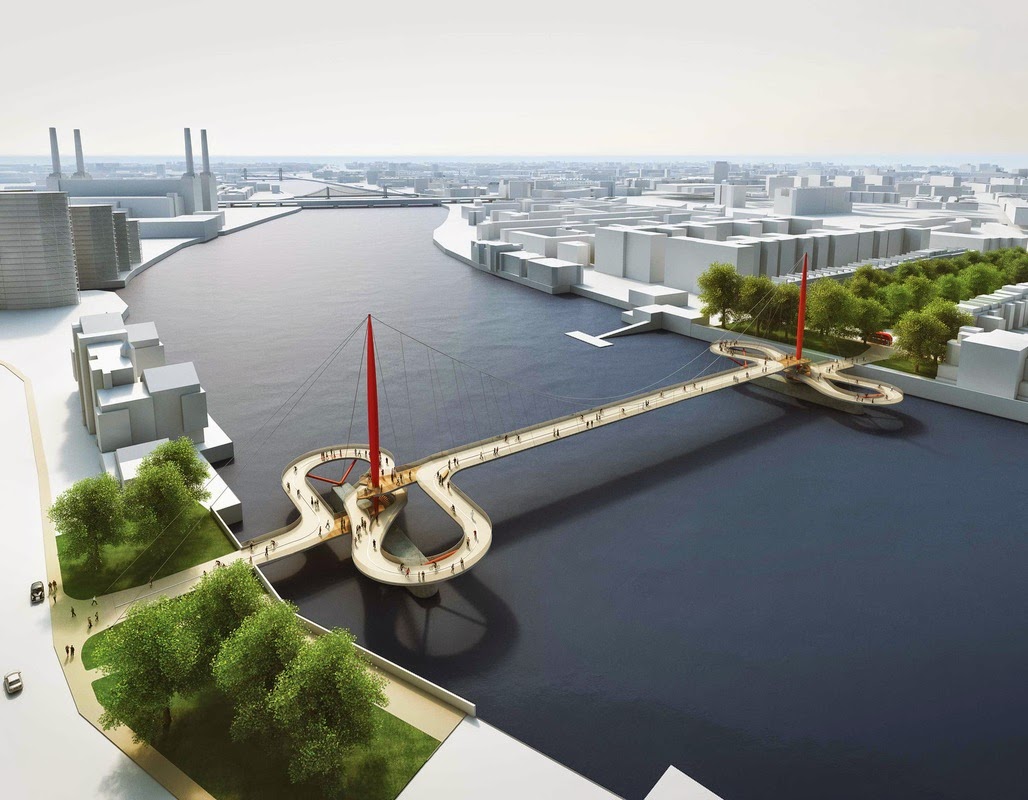 It is, of course, grossly unfair to judge the outcome of the contest based solely on these four rendered images. The jury allocated only 30% of their marks to these images, with the remaining 70% being for images as yet unreleased and the accompanying written submissions. However, a few comments may be in order.

What unites the designs is that they are in general structurally feasible (a characteristic not shared by all the entries), relatively modest and undemonstrative, and yet also at the same time tall. Indeed, some of the finalists are far taller than seems reasonable. The Arup / Hopkins design appears to have masts roughly twice the normal height for a suspension bridge, the Bystrup / Snell masts are also a little on the pointy side, while the Happold / Marks Barfield bridge is really striving to dominate its surroundings.

The Happold design is a development of the work they did for the client at pre-contest stage, although with a few unusual features. The image appears to show only single cables emanating from the tower top, then splitting to pick up the deck via a cable net arrangement. This is a pretty diabolical structural arrangement, which would be a nightmare both to build and maintain. The entire load from the bridge's main span must pass through two cable attachments, creating single points of failure which cannot easily be replaced if damaged. The mast is also split into two stems, although whether this two-fingered salute is aimed at the Nimbies on the Pimlico bank, or at the nearby US Embassy, it is difficult to tell.

The Arup / Hopkins bridge minimises physical impact on the riverbanks by locating the necessary serpentine cycle ramps above the river, and hence vulnerable to impact from stray boats in time of flood. Pedestrians appear to share the main span with cyclists, but to pass down via staircases which, like the masts, penetrate vulval openings in the ramps in what seems to me a very awkward arrangement.

Bystrup's entry is shrouded in mist but clearly features a quite improbable cable-stayed arrangement, where the back-stay cable are so steep as to be almost ineffective at restraining the tower. It's possible the weight of the supported ramps provides sufficient balance, but it looks horribly wrong in the image provided.

The Arup / AL_A design is my favourite of the four finalists. The skewed arch arrangement echoes several other similar bridges (the Clyde Arc, Hulme Arch, Gogarburn Bridge, Newport Street Bridge, and River Taff Central Link Bridge) but would become easily the largest of this type in the UK. Given how massive the Clyde Arch is (with a 96m span), this gives some feel of quite how enormous the Nine Elms Pimlico structure would be. This is not a straightforward bridge to build over a busy river, so it will be interesting to see how the designers addressed the "constructability" challenge set as part of the competition's first stage.

Overall, it is pleasing to see that the jury has not been swayed by either celebrity or by irrelevant flash, but I am far from convinced that these four were the best designs available, they instead have a strong scent of mediocrity. However, the promoter was clear that they were not choosing a design at this stage (indeed, the press release very pointedly labels each image as merely an "initial design idea"), but choosing a team. As a result, it will be very interesting to see how the designs evolve through the remainder of the competition and beyond.

The finalists go through to Stage 2 of the competition, described as a "competitive dialogue". Each team will be paid £12,000 to develop and further detail their design proposals, and to participate in a series of workshops and review meetings with both the Technical Panel and Jury Panel. I find this separation into two panels to be quite bizarre: it implies that the jury has insufficient technical expertise to properly evaluate the proposals, while relegating that evaluation to subordinate status. Why not just ensure the jury includes sufficient technical expertise within its ranks?

As well as being evaluated on their designs, the four finalists are also required to submit formal financial tenders for the design commission. As in the recently announced Bath Quays footbridge contest, the final evaluation of the competition will blend both the quality and commercial aspects, although the way in which this will be done remains opaque at present.

Right now, it's difficult to judge whether this project will ever actually make it to site, with Westminster Council, the authority for the north bank of the River Thames, actively opposing it. The project promoter, Wandsworth Council does at least now have four designs all of which should in principle fit within their £40m budget, so one of the normal issues with architectural bridge competitions has been successfully negotiated.
Posted by The Happy Pontist at 10:14 PM

Arup was really keen in being short-listed, it is impressive that they were able to make 18 submissions in this competition.

Arup and AL_A submission looks infeasible everything is too slender. The access ramps hogging will tend to twist the deck and the arch, perhaps a few columns have been missed in the visualization?

I am surprised how entries 20 and 61 were runner ups, apparently submitting and realistic structure in these competitions doesn't pay off.

It is interesting to see the diversity of entrants, the multiple application approach in the case of Arup and Buro Happold, the single entries by other well known engineers and architects, and then to also reflect on the omissions - those who decided not to take part.

I am always reminded on your sound views on these competitions in that the amount of effort needed to get to the short-list, never mind the finishing post, is potentially dis-proportionate to the investment of time.

However a focussed effort on a single, well considered entry should always be encouraged so that a landmark solution might emerge for a particular location. Eventually quality design coupled with technical reality will appear, based on the strengths of the whole team involved, and hopefully it will stand the test of time once it is built. Overall value for money should be a natural consequence of the team's combined skill so long as the laws of physics are remembered throughout the process!

It will be fascinating to see how the scheme develops from here and to compare the final solution with the original idea(s).

I'll put up a post on the other entries when I get a chance. I'm hoping to get sight of the jury report and the other boards first, if possible.

I think there are good aspects to how the competition was set up as well as bad. Several of the competitors seemed to completely misunderstand the contest's structure, although it is quite clear on their website: it was a hybrid between choosing a design and choosing a team. I think the major issue with it is you can't sensibly choose a team in an open contest, judging a few sides of A4 is not an effective way to do this.

Richard, did you identify any notable non-participants?

It seems that engineers and architects operate with different ground rules. The architects have all remained exclusive to one team whereas some engineers have had no qualms about making multiple entries.

Estimating the overall effort needed to succeed may well run to hundreds of hours of input for the whole team which then adds up to a lot of money. I can see some finance directors beginning to ask interesting questions of the short-listed bid teams as £12,000 will be quickly exhausted. The architects (who will be their own finance controllers) may be a little more pragmatic about this but photomontages and visualisations, let alone the original thinking, need time and skill.

I hesitate to directly name the engineering absentees as they may have justified reasons for not taking part - maybe for the issues mentioned above. But some of these include two of the largest US owned organisations that dominate the market having bought out established and well known UK firms in the last few years. It might be argued that a bigger organisation can absorb such costs because they have larger bidding budgets. Which is why the smaller specialist consultants have understandably confined themselves to single entries too.

Ultimately getting to the shortlist can then be credited to a marketing opportunity which sometimes is hard to value.

So that will be Jacobs and CH2MHill then. Maybe it's simply that nobody wanted to partner with them.

The point about engineers making multiple entries and architects not doing so is interesting, because it raises questions of authorship and self-confidence. For large engineering organisations, with multiple design teams on hand, each could meaningfully engage with separate design partners, and I know that this was the case with some firms involved here.

However, I think there's also a strong whiff of engineers acting as the non-dominant partner in several of the entering teams - this is obvious from the lack of engineering "vision" or quality to the designs, and this can be said about many entries from some quite well known names. Arup's designs with Cobe and H+N+S seem to fit this description. In these cases, it's not multiple teams entering, it's just a firm adding inappropriate credibility to a bad idea.

I don't think bidding budgets are what this is about. No sensible organisation commits serious money to a contest where the odds of success are both small and unpredictable. Many of the entries will have been prepared on a shoestring budget, or in particants' free time.