By the time the Tees Viaduct opened in 1975, its older siblings (the Middlesbrough Transporter Bridge and the Newport Lift Bridge) must have been a major cause of traffic delays. It's no surprise that a fixed rather than opening bridge was built, necessitating a long, high-level structure. However, shipping on the Tees was already declining, and fifteen years after the viaduct was built, there would be no need for shipping clearance at all, with the Tees Barrage under construction and the Lift Bridge locked down. 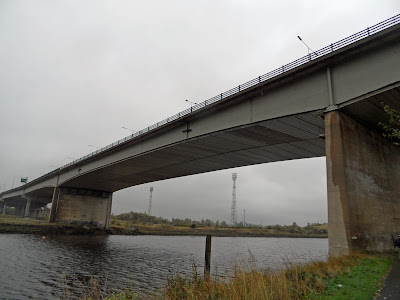 The Tees Viaduct was a relatively unremarkable structure, comprising welded steel girders, a composite concrete deck slab, and reinforced concrete piers. The 117m main span contains a central section suspended on half-joints, which was typical of the time although would almost never be adopted today. The bridge totals 1.95km in length, of which 625m consists of fabricated plate girders, and the remainder is built from off-the-shelf Universal Beams.

Designed by Dobbie Sandford Fawcett and Partners, and built by Cementation Construction, the bridge would have been unremarkable if only it had performed well. However, the bridge performed badly almost from the date it was completed. The deck expansion joints leaked from an early stage, the bridge's roller bearings were not operating correctly, and cracking was observed in the concrete piers. These, and many other problems, led to the bridge undergoing major refurbishment just twelve years after it first opened, with the bulk of the work taking place between 1987 and 1990. 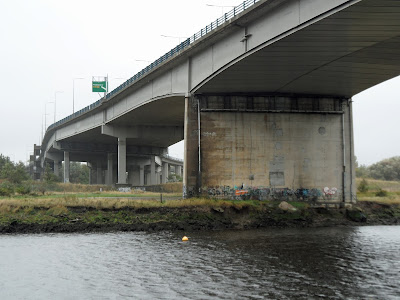 The leaking deck joints led to road salts contaminating the concrete bridge piers. These were the subject of a number of chloride extraction trials. The roller bearings were replaced, expansion joints renewed, and large areas of deck concrete, affected by faulty waterproofing, had to be repaired. A report in 1999 suggested that the original bridge construction cost had been £10m, but the cost of repairs totalled £25m.

The principal feature of interest on the bridge today, and probably a significant part of that refurbishment cost, is the presence of a glass-reinforced plastic enclosure which surrounds the main girders. This comprises Maunsell's patented "Advanced Composite Construction System", ACCS, later given the name "Caretaker". At the time it was installed on the A19 Tees Viaduct, it was being heavily promoted both as a way of protecting bridges against weathering and corrosion, and also of providing improved maintenance access, particularly at locations where such access might otherwise be difficult. The A19 viaduct crosses both a major river and also railway lines. 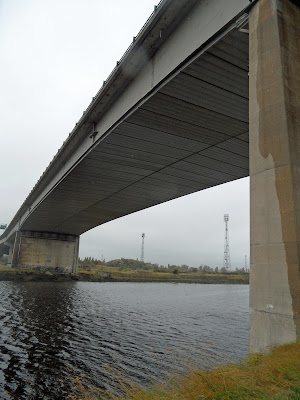 The only other major use of the system that I can think of, on approach roads to the Second Severn Crossing, had a similar motivation, but bridge enclosures have not proven popular.

The appearance is not as bad as I had though it might be, and the GRP panels seem to be durable so far. It doesn't look significantly worse than an unadorned plate girder bridge. I'm only guessing, but I presume the cost has been the major disincentive to wider adoption. I also wonder whether the system would have had more use if it wasn't shielded by patent.