From Bridge of Carron, we headed north along the Spey Valley. The next stop was Charlestown of Aberlour, and the Victoria Bridge. 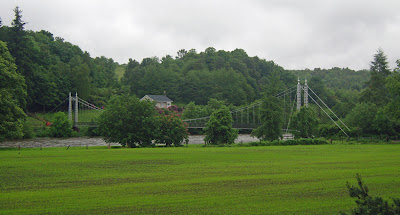 So far as I can tell, this is Scotland's second longest pedestrian suspension bridge. British Listed Buildings (see link below) reports an approximate span of 320 feet, but J R Hume's classic paper on Scottish suspension bridges suggests 275 feet. Civil Engineering Heritage offers 287 feet (or about 87.5m), which pretty much matches what I get by scaling from Google maps. There are other long suspension footbridges at Pitlochry (Hume suggests 250 feet or 76m, but Google maps suggests less) and Dryburgh Abbey (Hume and Google agree on 250 feet). I think the longest in Scotland is probably the one at Gattonside (Civil Engineering Heritage reports 296 feet, or 90m). 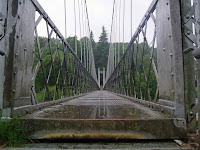 The bridge at Pitlochry has clearly been subject to lateral sway at some time in its history, as the bridge deck is horizontally stayed back to the river bank. There are no such cables on the Aberlour bridge, and unsurprisingly for this span, it sways significantly, with mild vibration perceptible just from the wind, let alone from pedestrian excitation.

The bridge was built by James Abernethy and Co. in 1902 to replace a ferry, and was nicknamed the "Penny Bridge" due to the price of tolls originally levied upon it. It has some similarities to the same firm's bridges at Polhollick and Cambus O'May, both of which I've previously reported on, and which I'll be covering again in a few posts' time. It is now Listed Grade A.

Unlike most similar bridges, the hangers are connected to the top of the parapet trusses, rather than at deck level. I don't know whether this affects the stability of the bridge significantly.

The towers are tall, with their height emphasised by the taper of the lattice-work legs and the sharply pointed finials at the top. Stays provide lateral stability to the tower portals.

It's a somewhat austere bridge, something enhanced further by the very minimal vertical curvature on the deck. I admire it, without feeling at all charmed by it.