It's been a while since I've had any news to report on Sunderland's River Wear Bridge, the structurally ambitious competition-winning highway bridge design by Techniker and Spence Associates. 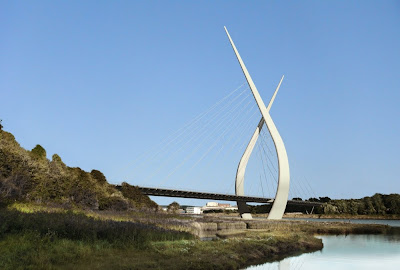 Just before Christmas, the project made its planning consent submission, depositing a mammoth package of drawings and reports that must total at least 400 pages. You can find it yourself by visiting Sunderland's planning portal and searching for the application reference 09/04661/LAP.

The reports include a number of interesting engineering documents as well as the normal planning statements, and I've extracted some of the more interesting points here.

It's clear that lead designer Techniker has devoted considerable effort to proving the feasibility of a design that seems by far their most challenging project. They've contracted the prestressed concrete bridge expert Nigel Hewson to provide engineering support, and their design has been peer reviewed both by Roughan O'Donovan and Aecom.

For the first time, we're given a cost estimate for the bridge itself, separated out from the highway scheme's overall cost of £133m. At £46.1m, it's pretty much in line with the budget of £43m specified in the original RIBA bridge design competition (contrary to my previous speculation). The bridge is 336m long, with a maximum span of 144m, and the deck is 25m wide. The cost therefore works out at about £5.5k per square metre in plan, which I would say is pretty cheap for such an unusual design. I've previously noted that it's comparable with Calatrava's Alamillo design, which, although controversial in its own right, is a considerably more structurally efficient bridge.

The planning submission contains a Statement of Community Involvement, which reports on a survey of 161 people, of whom 93% rate the Techniker design as "fairly good" or "very good". That's nice, but it ignores Sunderland Council's previous and larger survey (see council report [PDF]), where out of 1,641 responses, 49% wanted a "tried and tested design", and 58% wanted to minimise the impact on taxpayers (which this design hardly does).

The masts (one 140m high and the other 190m, making it the tallest bridge tower in the UK) are a very interesting construction. At the very bottom, they're of prestressed concrete with a stainless steel skin, but for most of their height they comprise prestressed concrete composite with a 12mm thick painted structural steel skin. The very top section is pure structural steel. Essentially, the prestress cables could be thought of as the "missing" back stays, hidden within the pylon. 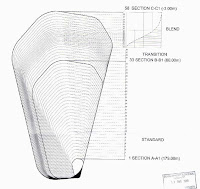 The reports acknowledge the difficulties of fabricating the very complex steel plates involved, which are constantly changing in cross-section, rotating in plan and elevation, and hence much of the steel plate is curved in two directions (see drawing extract on the left, all drawings are taken from the planning submission).

Given the size of the towers, the steel skin will provide very little structural benefit. Indeed, its interaction with the tower prestress and with the creep behaviour of the internal concrete make it a significant complication in the design. 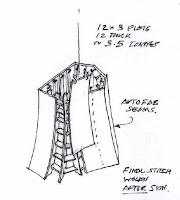 It seems to be there partly to provide an ultra-smooth finish sought by the architect (welds are to be ground flush up to 40m height, which strikes me as rather pointless), and partly to act as permanent formwork for the hollow concrete tower cores, which would otherwise be very awkward to form. The downside of course is the enhanced maintenance cost associated with painted steel. Compare the steel-clad concrete pylons on Stonecutters Bridge: these use a 20mm thick stainless steel skin providing a genuine composite benefit (indeed, the composite system replaced the original steel-only design), but I presume the budget at River Wear ruled out stainless steel.

The pylons sit on a caisson foundation 40m by 24m (or alternatively, on a grid of 78 1.2m diameter piles, they haven't made their mind up yet). Quite a bit of thought seems to have been devoted to carefully positioning the foundation relative to the pylons so that the forces, including massive torsions, are as well balanced as possible.

The deck is a steel and concrete composite ladder-beam system (see image below right), with short outriggers picking up the cables. That's a reasonably economic choice, although it struggles near the pylons, where the hogging bending moment is highest. At these locations, the designer suggests the deck concrete may need to be post-tensioned, which strikes me as an unusual and interesting approach.

The deck is likely to be launched, with the pylons built at the same time and the cables stressed only after both are complete. That seems at first to be very odd choice for a cable-stay bridge, particularly given the expense involved: a number of temporary launching props will need to be installed in the river, and subsequently cut off or pulled out through holes in the deck. The normal approach for a cable-stay bridge is to cantilever the deck in segments from the pylon, as was done on Alamillo (where the pylon and deck were both cantilevered segmentally in phase). The ability to use the stay cables both as the temporary and permanent support for the deck is normally the great economic advantage of this type of bridge.

At River Wear, however, the lack of back stays means that the cantilevers would be unbalanced, and the loads imposed on the pylon and foundation during construction could substantially exceed those in the final condition (where the deck acts as a continuous beam, or propped cantilever). The design is therefore entirely driven by the architectural rather than the structural logic - a cable-stay bridge is a means to an end (the production of an icon), rather than the logical response to the engineering challenge.

Despite the bridge's utter lack of any basic structural rationale, I found myself strangely impressed reading though the documentation. If you accept the architectural vision as sacrosanct (Ove Arup style), it's clear that the designers have risen to the challenge posed by this deeply unconventional, flagrantly contrary structure. I understand that detailed design is now underway, and no doubt the technical challenges which remain are tremendous but perfectly capable of being resolved. Once complete, the bridge will be a major engineering achievement.

I think I can admire that, without in any way liking the bridge.

Posted by The Happy Pontist at 8:52 PM