Our first day's journey through the bridges of Scotland continued to head north, towards Inverness, where we would rest. Our next stop was the tiny hamlet of Tomatin, home to three interesting bridges. Sadly, we didn't have time to visit the nearby bucket bridge at Shennachie, that will have to be one for a future trip. 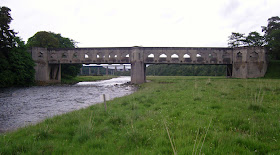 Findhorn Bridge was built from 1924 to 1926, and carried the old A9 highway for two spans over the River Findhorn. An inscription on the bridge states it was built as a replacement for a Thomas Telford structure of 1833, although it is likely that Telford's bridge had in fact been lost earlier. The bridge was built by Sir Robert McAlpine and Sons for £36,120. 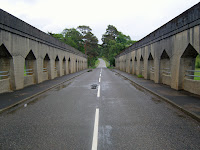 The bridge was designed by Owen Williams, with Maxwell Ayrton as consulting architect. The two worked together on a number of bridges, and Findhorn Bridge is generally thought to be one of the most successful examples. On earlier schemes, such as the now-demolished Lea Valley Bridge, Ayrton's main contribution was to add monumental towers at the ends of the bridge, structurally irrelevant but marking the bridge as a gateway structure. For the Findhorn Bridge, the choice of a structural form which could be monumental in its own right, led to a happier collaboration.

So far as I am aware, there's nothing quite like Findhorn Bridge anywhere else. It has two 29m spans, each broadly of the Vierendeel truss type, in massive reinforced concrete. That in itself isn't completely without precedent. What is unusual is the architectural treatment of the bridge. 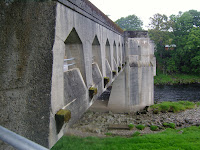 The openings in a conventional Vierendeel truss are rectangular, sometimes with filleted corners. Where applied, the fillet enhances the strength of joints between the vertical and horizontal truss members, the joints being subjected to particularly high stresses in a Vierendeel design. In the Findhorn Bridge, the upper fillets have essentially been massively extended until a semi-octagonal opening is formed, instead of a rectangular one. 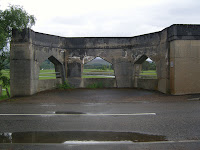 The effect is less like a bridge truss, and more like some kind of gothic arcade. The bridge elevation could be the facade of an architectural folly, particularly with the hulking overlook towers at each end. The central "tower" incorporates rectangular view-ports with a distinct resemblance to the arrowslits on a medieval castle. The overall impression is of sullen impregnability, a barely-pierced grey rampart. Stand here and prepare to repel invaders.

Nonetheless, the bridge has a considerable portion of charm. Much of this comes from the shaping and detailing of the various elements. For example, the outer face of the parapet wall is inclined inwards, keeping it visually distinct from the main truss elements. The vertical members have a chevron groove at their top which enhances the visual impression of it being a colonnade rather than a truss. The crossbeams below the deck are fish-bellied, reflecting the way the designer presumably understood the stresses to be distributed. 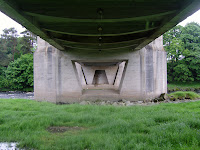 The trapezoidal opening in the central bridge pier is echoed by the shape of the legs recessed into the two end abutments. I'm far from sure how the bridge is supposed to articulate - the recessed legs, which narrow towards their base, suggest that under thermal expansion, the end legs are intended to flex while the central pier is a fixed point. 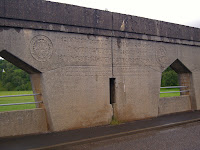 One nice feature on the bridge is the presence of "inscriptions" cast into the concrete surface. One, near the end of the bridge, credits "E. Owen Williams", something I'm sure many modern bridge designers would like to see emulated. Another, near the middle, describes the purpose of the bridge and offers more detailed credits to the various parties involved. 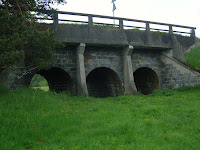 A short distance to the east of the bridge lie three flood arches. The stonemasonry suggests that these are part of the original Telford construction. On the south face, the road was widened in reinforced concrete by Owen Williams, and the result is a nice instance of old-meeting-new with neither suffering.